What are the main differences between a stand mixer, a countertop blender and a food processor?

I'm looking to replace my countertop blender. Since my kitchen space is rather limited, I was doing some research to see if there are any "multipurpose" devices. I found out that there are also stand mixers and food processors and many of the tasks they can be used for overlap. I've never used a food processor or a stand mixer before.

So my question is: What are their main differences? E.g. thekitchn lists all three (!) of them as essential small appliances which seems very odd to me, given that so many tasks they can do overlap. Why are all three of them necessary?

While two of the three items you mention are similar (though not identical) - the food processor and blender - the third is completely different - the stand mixer. There's actually a pretty awesome, in-depth guide to these and more kitchen tools on BuzzFeed. I'm going to reference this some and use images from it.

A stand mixer is not a cutting implement, which the other two are. It doesn't have a blade at all. It's closer in equivalence to a hands free hand mixer.

It usually comes with two or three options for mixing - a "paddle", generally a stiff, heavy, flat metal piece; a "whisk"... which is a large balloon whisk; and a dough hook... which is generally a hooked shape attachment that helps knead dough. Here are what the attachments might look like, though they vary based on the model. 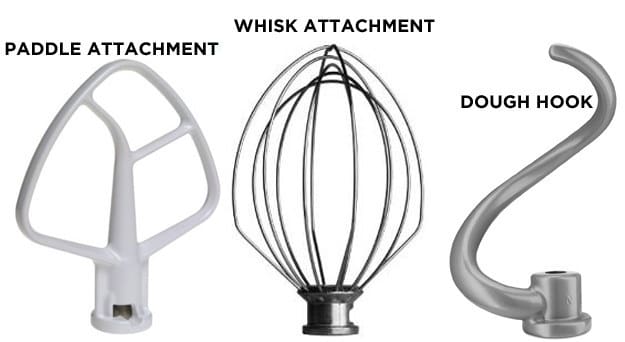 Which attachment you use depends on what you're making and will usually be indicated in the recipe. But, in general, you'll use the paddle for most cake batters and cookie doughs, whisks for whipping up frosting, cream, and egg whites, and the dough hook when you need to knead dough.

Many of the brands of stand mixers, particularly Kitchen Aid's various models, have secondary attachments that can be purchased separately. This includes things like pasta makers, choppers, grinders, sausage stuffers, etc.

I find food processors more broadly useful than blenders - I don't actually own a standard blender, preferring to use an immersion blender instead. They're generally larger but they won't have the vortex action that you really need for things like smoothies. Food processors all come with a blade that spins, chopping up all of the stuff in the bowl. You can use it to quickly chop vegetables or grind meat, though your results can be a bit mixed. It's also great for making pie dough (my preferred method) and making dips and sauces like hummus and pesto.

In addition to the main blade, many brands either come with or sell separately a collection of slicing and shredding discs. I find these to be lifesavers when you're trying to make something like Scalloped potatoes. You can slice the potatoes perfectly evenly and paper thin and then swap out the slicing disk to the shredding one and shred your cheese in 10 seconds.

You can certainly do some of the same things in a blender - making (thinner) hummus and pesto, for example, but it's not going to have the discs and you're not going to want to try and make pie dough in it or anything you just want coarsely chopped.

As I mentioned, I don't personally have a stand blender because I rarely make the thing it's really good at - smoothies (and frozen drinks like margaritas) - and it's more convenient to use an immersion blender for soups than to try to transfer boiling hot soup from the pot into a blender bowl.

A blender makes soft creamy liquids (purées). For example, you'd put a bunch of cooked vegetables it in with stock to make soup. But if there's not enough liquid in the blender, the blade won't make enough contact with the mixture being blended to churn it around and purée it evenly. Translation: without enough liquid, ingredients in a blender won't blend, and the motor will burn out. So, blenders are better for anything with a thinner consistency, while food processors are better for thicker mixtures.

So, do you need all three? No, not really... you don't need any of them. They're time savers and convenience tools. Anything that we use them for now, we could still make before they existed... but I personally don't want to spend twenty minutes with a whisk and a copper bowl making meringue or trying to evenly slice potatoes for gratin, or actually... maybe smoothies would have been pretty impossible before a blender... but there's always Jamba Juice.

To decide what you need in your kitchen, think about what you cook and bake (or would like to) and go from there.

The blender for my stand mixer and food processor (two separate products both made by Kenwood, with an overlapping range of accessories) is a perfectly good blender. But if you use it daily you may find a couple of irritations. It's a little more fiddly to use/wash/reassemble than a dedicated blender, and it takes up more worktop space (I have plenty of cupboards so these appliances are put away). Because I very rarely use the blender, it's perfect for me.

Not the answer you're looking for? Browse other questions tagged equipment blender stand-mixer food-processor or ask your own question.

10
What to look for in a Stand Mixer?
1
Blender vs food processor vs juicer