Skillet rust (?) and next steps with regard to seasoning

Yesterday, I got a cast-iron skillet, and the first thing I did was try to season it. I washed it vigorously with soap and water, then rinsed it for several minutes.

After drying it with a paper towel, I put it on the stove and started up flame on the medium setting. Then I took a brush, which I used to cover the entire (hot) cookware surface with oil. By this time, my oven had been preheated to 350 degrees Fahrenheit, and I put the skillet in for 30 minutes.

After taking it out and letting it cool, I found that the patina looked terribly sticky, and I could still see and feel the coarse original cast-iron finish. A bit of research revealed that this is because (i) because I used too much oil and (ii) because olive oil isn't good for seasoning. Oh well. I washed it out (soap and water), dried it, and placed it on medium heat for 10 minutes so that it wouldn't rust. I turned the heat off after 10 minutes, and went to bed to try it again with canola oil today.

To my shock, I found the following on my skillet (two pictures of the same skillet). Look at the edges of the dark spots to see what I mean: 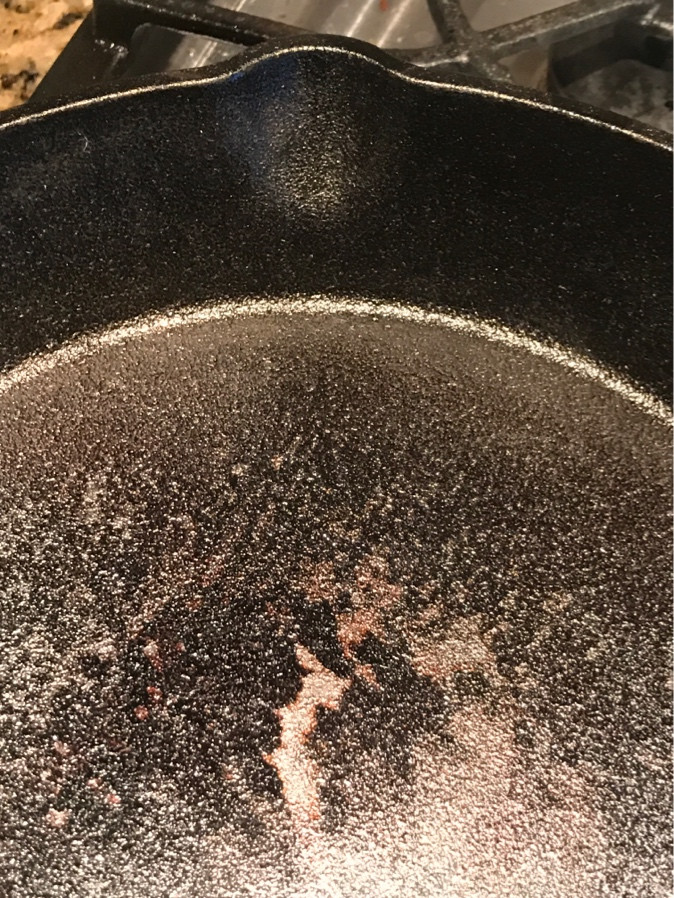 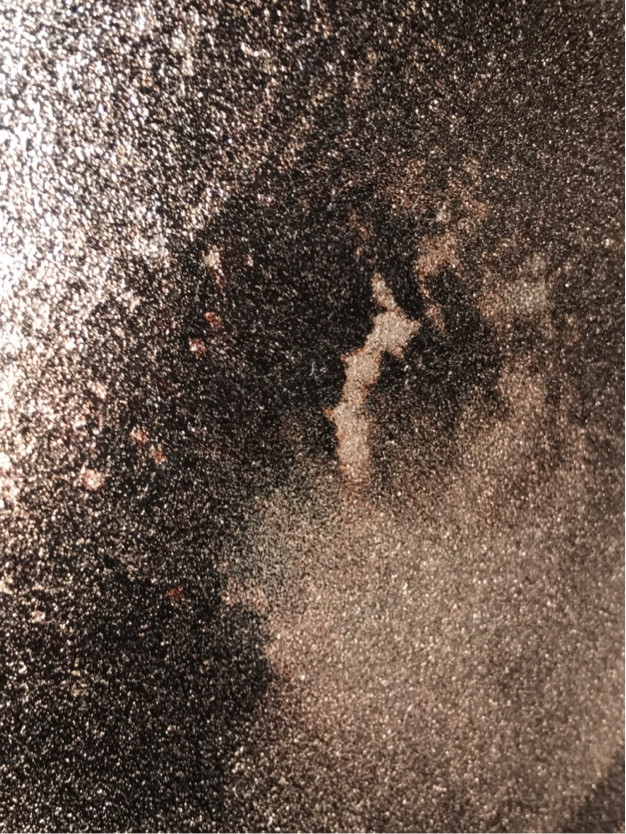 Is this rust? Or is it some strange transition material between the seasoning patina and the cast-iron? How did this get there, and what can I do about this (in the present to fix and in the future to prevent)?

Additional questions (I'm a beginner, so I have a few):

The marks look like bare iron, as though the seasoning has actually been fully removed there. How hard did you scrub?

I use vegetable oil and use only about a teaspoon for the inside cooking surface and sides. Another teaspoon for the outside and underside and handle. You really don't want too much oil or it will become sticky because it hasn't broken down fully, which is probably what happened with your first attempt. I imagine your skillet was already pre-seasoned anyway.

To fix it, heat the pan on the cooker for a bit, then reapply the oil in a thin layer with a piece of kitchen towel, and use another clean kitchen towel to wipe away any excess. The pan should be hot but not searing, the heat apparently helps open the pores of the metal. The surface shouldn't look wet or have wet spots. It should have a sheen to it.

Put it in the oven, upside down, on the maximum temperate (around 240c or 450f) for an hour or longer. When you pull it out, it should be seasoned nicely. The surface won't have a sheen anymore, and it shouldn't be sticky to the touch once it's cool.

You can repeat the process a few times if you think it needs it.

79
What's the best way to season a cast iron skillet?