Why did my devil food cake come out flavorless?

Here is a picture of my devil food cake 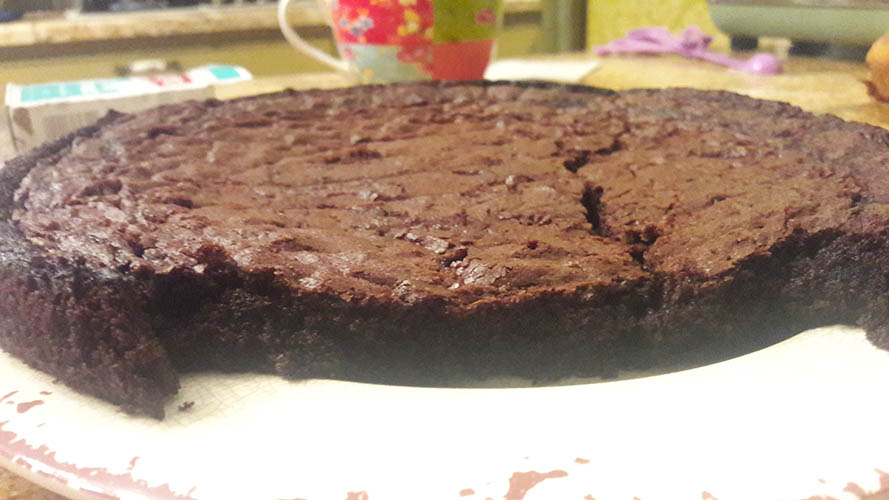 . The recipe is in this video (there is no written recipe). Just by looking at the cake, could you tell what mistakes I have done baking it?

Add 4 eggs each at a time. Add 3/4 cup dutch process cocoa (didn't have dutch process so I used regular cocoa with 3/4 teaspoon of baking soda to reduce the acidity of regular cocoa) with 3/4 cup hot water and 3/4 cup 15% sour cream + 113 grams of bittersweet dark chocolate.

Then add 2 cups (240 grams) white flour. Mixed everything and put in a buttered and dusted pan. Baked in oven for 180 degrees (350 f) for 35 minutes (recipe called for 45 but it would have burned if I cooked that long. I also made sure with a thermometer my oven was at the right temp). Let rest for 15 minutes then take out.

It was supposed to come out choclatey, brown, fudgy and moist. Instead it came out dry, black, flavorless and it also broke into two pieces when I took it out of the pan.

In baking it's very important - particularly when making your first cake - to follow the recipe as precisely as you can.

If you do not have the ingredients - Dutch processed cocoa, in this case - find a recipe that uses ingredients you can get. The pH balance is not the only difference between the two, as explained in this Serious Eats article:

So, your complaints of no chocolate flavor likely are due to the recipe relying on the stronger chocolate flavor of the Dutched cocoa than natural. On top of this, cocoa brands are highly variable in quality. If you don't splurge on high-quality cocoa, you're probably not going to be happy with the outcome, particularly if the recipe was designed for it. This is one of those ingredients where matching the brand used by the author is probably a good call.

Dutch cocoa is also pH neutral, while natural cocoa is not. It looks like you may have attempted to combat this by adding extra baking soda but that may not be an appropriate solution. The SE article reads:

If a cake or cookie recipe only calls for baking soda, it likely uses acidic natural cocoa. If it only uses baking powder, it'll probably ask for Dutch process cocoa instead. If a recipe calls for both baking powder and baking soda, you'll need to follow the recipe to get the proper balance of acid and alkaline. Recipes that use baking powder will likely rise regardless of tweaking, but not as well; it's best to stick to the cocoa that a recipe calls for.
emphasis added

In addition to this, overuse of leavening (in an attempt to neutralize your natural cocoa) could have caused your cake to over-rise early in the baking process and then deflate because there wasn't sufficient structure to support it, thus causing it to be dense and flat.

Preparing the ingredients properly (room temperature butter) is also very important. Creaming butter and sugar introduces a lot of air into a cake. Failing to do so to a sufficient degree will cause the cake to be dense. It's considered "mechanical leavening" you're mechanically introducing air into batter. In relation to cookies, it's discussed on Serious Eats.

See, unlike stirring, mixing, or beating, creaming isn't about combining ingredients—it's about aerating them. By bashing butter against the sides of a bowl, whether you're going at it with a spatula or with a stand mixer, you're folding it over and over, creating little pockets of air with every turn. Add sugar, and suddenly that process is way more effective, building up an expansive network of sugar crystals, fat, and air.

In pastry-speak, this process is described as "mechanical leavening": physically cramming air into a dough so that it'll puff up in the oven like a hot-air balloon. Google around, and that's what you'll be told, time and again. Creaming adds air. Air is fluffy. Fluffy is good. Good is great. Yay, cookies!

While some recipes may only ask you to cream the butter and sugar until well combined, most invoke the phrase "light and fluffy." Both techniques have merit (the former intentionally cultivating a denser dough), but here I'm gonna stick to addressing the mysteries of "light and fluffy" alone.

In my experience, the number one mistake people make with creaming is using overly warm butter. Experts generally cite 65°F as the ideal temperature for butter, but that fails to take into account a couple of critical factors. First, the temperature will go up as soon as you add the sugar, which is as warm as your kitchen. And second, once you start mixing, the friction generated by an electric mixer can be enough to warm eight ounces of butter by one degree every minute. That doesn't leave much time before the butter hits the point of no return [68F]. Therefore, err on the side of keeping things cool.

She notes that butter over 70F won't hold air at all, so don't let it get that high.

In the comments you mentioned that you used a pan that was slightly bigger than what the recipe recommended - 9.8 inches instead of 9 inches. A 9-inch circle has an area of about 64 square inches while a 9.8 inch circle has quite a bit more, 75.4 square inches. That's a difference of about 20%. The difference is less pronounced at smaller sizes but when you get into these bigger cake pans, it can make a huge difference.

This is likely why the baking time was so off for you. More surface area for the same amount of batter means that the entire thing will cook more quickly - the batter will also be shallower in order to accommodate the larger size and will cook through sooner. Being thinner also means it is more likely to dry out - particularly if over baked.

There's an interesting guide to adjusting recipes for different pan sizes on Food 52 that you might find helpful. It addresses a similar conversion to yours:

Just by glancing at the two pans, you might think that a 9-inch pan is very close in size to an 8-inch pan of the same shape, thus making it a reasonable substitute. But if you check the chart, you’ll find that a 9-inch square pan is more than 25% larger than an 8-inch square pan. (The relationship between a 9-inch and 8-inch round pan is similar.) Such a considerable difference will result in a 9-inch batch of very thin brownies that may be over-baked by the time you check them for doneness (because thin brownies bake faster than thick ones). Knowing this beforehand, you can increase the recipe by 25% for results as thick than the original recipe intended. If you want brownies that are even a tad thicker than the original recipe, you can even increase the recipe by 33%.

So, I'm not sure whether other things went wrong. I've not tried this recipe but it's from a reputable source, so it should be fine. I reiterate - follow the recipe or find a different one that you can follow if you really want so have success in the kitchen, particularly with baking!

6
How should I alter a chocolate cake recipe to make plain/flavoured cake?
8
What purpose does coffee serve in a chocolate cake recipe?
3
Failed chocolate sponge
1
Biscuits (cookies) turning out more cake-like than biscuity
4
Sugar Free Chocolate Cake Too Dense
3
Why does my cake get hard after baking?
5
How can I substitute dutch chocolate cocoa for flour and maintain proper recipe PH in this cookie recipe?
3
Why does my Heavy whipping cream pound cake have an aftertaste between flour and metallic?
3
My cake is moist but crumbly
4
What should be added to brownies when reducing cocoa powder and vanilla extract?