Over the holidays my uncle sent my parents steaks from a website called Omaha Steaks. Included with the steaks were, among other things, some potato appetizers, that the packaging called "Potatoes Au Gratin". Now I've had Potatoes Au Gratin before and these things are quite dissimilar. A cursory web search also reveals that these are not Potatoes Au Gratin.

I'd like to make these myself but without knowing what they are it is pretty hard to look up a recipe. What are they called? 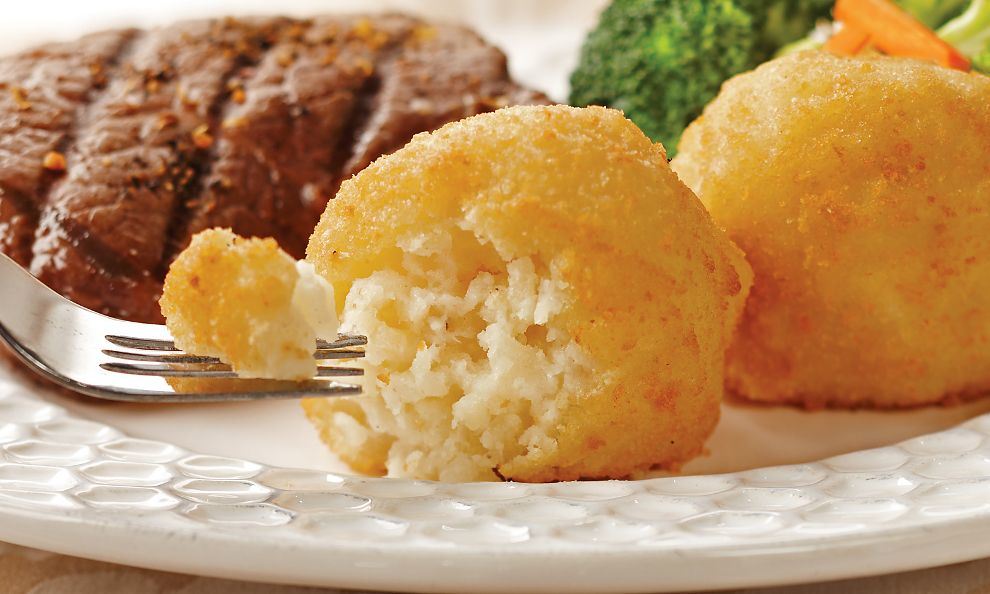 and here is the order page. The description reads:

These make a unique appetizer or an elegant side dish! Creamy shredded potatoes in a light breading prebrowned to a delicate golden brown. Available in individual servings. Just bake, serve and enjoy!

These are very similar to potato croquettes, for which there are tons of recipes. Those are usually made with mashed potatoes instead of shredded, but otherwise pretty much the same deal. You can find recipes with varying amounts of creamy things and cheese; I'm guessing the Omaha Steaks ones are on the higher end of that.

If you want to try to match the shredded texture better, you can probably start with a potato croquette recipe and just bake and grate/shred the potatoes instead of mashing them.

As Cindy noted, you can also find recipes by searching for "au gratin potato balls", plenty of which are mimicking the Omaha Steaks ones. I might be inclined to use a croquette recipe, because it's a more common name so it's easier to find obviously trustworthy recipes, but you'll probably be fine either way.

While they look very similar to potato croquettes, I would say that they are actually something called 'pommes noisettes' (<-- French wikipedia) which translates to hazelnut apples/potatoes.

These are a variant of the many potato balls, such as Pommes dauphine, Duchess potatoes, and Pommes soufflées.

To search recipes, I'd suggest dropping the au gratin from other comments and just google 'potato balls recipe'. For interesting variants, add 'loaded' to the search.

From the photos. Potato balls made with riced potatoes. But have not seen a potato ricer for many years. Do not know if still made. Look on line for one. What the breading is no idea. You make them from left over baked potatoes. Remove skin then rice them in the ricer. Spice form ball. bread & fry them.

5
What exactly are Bamboo shoots?
5
What are the transparent strands in this salad?
9
What are 'boiling potatoes'?
2
What are yellow sushi radishes called?
8
What are berry grains?
11
What are "Honey Bubbles" and how are they made?
3
What are these clear parts in beef steak?
0
What are these stones?