What is the difference in the mixture for crepes vs pancakes.

Every recipe I can find on an english language website, suggests a very similar ratio of flour/eggs/milk, but then end result is something that tastes like a pancake. Perhaps there is a specific technique required?

Crepes and pancakes are very similar in ingredients, crepe batter is thinner (i.e. runnier). American pancake batter spreads some then stops so you get thicker pancakes, crepe (by the way in many parts of the english speaking world crepes are called pancakes) batter spreads more. It doesn't take that much more liquid to get a crepe batter.

A Crêpe is a pancake. It may be a pancake made by a skilled crêpiere and spread ultra-thin by use of a crêpe spreader and flipped with a crêpe spatula, which requires use of a low sided pan or griddle to properly achieve, and perhaps served up with orange or cream sauces, but it is basically a pancake. 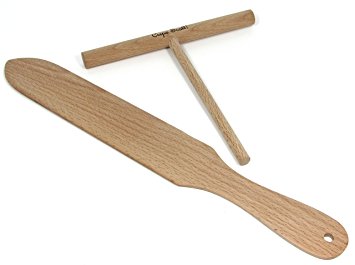 Delia, Nigella et al give us the same recipes under the name crêpe as they do under the name pancake. So, my understanding is that there is a large middle ground where people use the different terms to refer to the same object, possibly dependent on their class origins and pretensions, but at the extremes a pancake is spread by swirling the pan and a crêpe is spread thinner with implements and may tend to be larger in diameter. (and one is more French)

Crêpes are a kind of pancake, which are very thin. While German and Scandinavian pancakes are thicker, American breakfast pancakes are typically even thicker.

In American pancakes baking powder or other leavener is often used to raise the batter. Another trick is to whip the egg whites separately before carefully mixing with the yolks to achieve even fluffier American pancakes. However, the French crêpe as it is served on the street or in a restaurant, is thin so it can be easily folded, wrapped, or rolled. Sometimes sugar is added to the batter. In contrast, a kind of savoury crêpe made out of buckwheat is the galette, of northern French origin. Both the wheat crêpe and the buckwheat galette are intended to be used with fillings, from the most basic: a sprinkle of powdered sugar, to jam, chocolate, or even nutella. Crêpe Suzette is a sweet version made using liquor and then enjoyed with a spectacular flambé. Wheat crêpes can also be served in savory combinations: with cheese, herbs and creme fraiche (French sour creme), or mushroom stew.

Regarding recipe and technique, some crêpe recipes call for substituting half of the milk with water in order to achieve an even thinner batter. When making crêpes at home it is essential to use as little batter in the pan as possible. This can be achieved by either tilting the frying pan in a circular motion or by pouring off excess batter. A thinner batter will spread faster through the pan and will take longer to solidify, so thin crêpes are easier to make using a batter that is thinner than for regular "pancakes". Finally, there is no baking powder in an authentic crêpes batter.

Essentially, crêpes are a kind of thin pancakes.

Not the answer you're looking for? Browse other questions tagged pancakes crepe or ask your own question.

13
How to make pancakes/crepes without eggs nor any liquids besides water?
2
why do my pancakes (crêpes) take such a long time to cook?
6
How would changing the amount of egg affect a pancake recipe?
4
Why would the first few pancakes come out perfect, but only get worse from there?
3
What do the base ingredients in pancakes do?
2
How can I make my (American style) pancakes light and spongy?
3
Why do my pancakes fizz?
2
Oatmeal pancake deflates
5
Making Thai Khanom Tang Teak (ขนม ถัง แตก)
2
Vegan crepes that don't fall apart when turning