What is this palm like plant called? (Spoiler: leek) 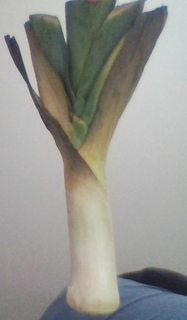 Update if a google hit lands here under leek: The light green parts in the top core are tastier than the white parts in my opinion. Don't throw them out.

That appears to be a leek, and not one in the prime of health either.

Trim off the root end. If it came from a farm, you might want to give it a traditional de-gritting by cutting it in half lengthwise and rinsing to get out any dirt between the leaves/layers (typically around the border between white, which was underground, and green, which was above.)

You can bake or braise them, but most people slice them into half moons (because they were already in half lengthwise) and use them wherever you would use onions. Don't use any brown part, nor the really sad green part, but happy looking green part is fine.

Recipes that specifically call for leeks abound, of course, now that you have a name for it.