What is the exact difference between been sprouts and banana blossoms. They look very similar, so much to make me think that banana blossoms might be a joke...

They're a thing, though mostly eaten in India and other parts of asia . Banana Blossoms are actually typically found as a great big bundle like this 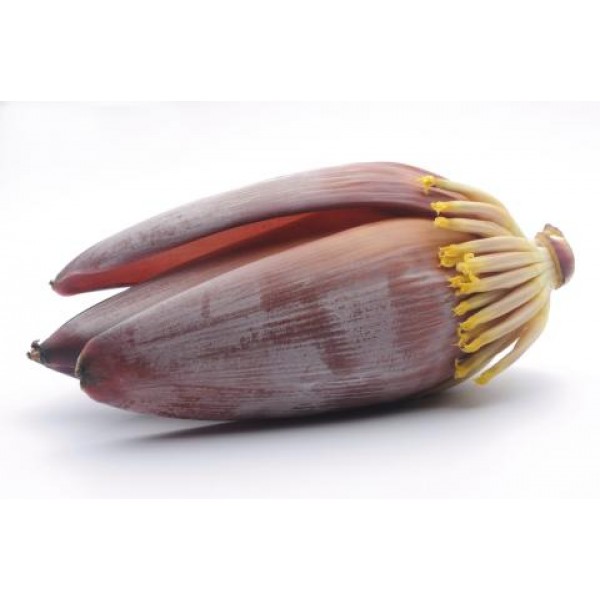 You basically need to remove the purple 'cover' to get the little yellow flowers The little yellow things are the edible parts though you need to manually remove the stamen from each. They're slightly bitter and typically cooked.

Beansprouts are... well sprouted beans - I believe typically mung or soya, and are a whole plant, not part of a plant.

In short, they're completely different in every way other than maybe being tubular thin edible plant parts. Swapping in one for another isn't something that would work.

Bean sprouts are germinated mung beans, basically a stem, with very small leaves at one end, and the grain and perhaps rootlets at the other.

Banana blossoms are flowers, made up of petals that (in this case) form a hollow tube (each tube is a separate flower). The images in the article you linked to look indeed like banana "flowers" (or rather, inflorescences: a group of flowers forming a visual unit).

Not the answer you're looking for? Browse other questions tagged vegetables vegan or ask your own question.

8
Will vegetables and fresh herbs last longer in the refrigerator in a plastic bag?
2
What should I know about the peels of raw fruit and vegetables?
3
How to cook very large Brussels sprouts?
3
What vegetable might be called a Worchester?
35
What's (really) the difference between fruit and vegetables?
5
I bought a bag of Brussels sprouts that looked fine but smelled exceptionally bad, even for sprouts
3
How do green jackfruit and hearts of palm compare for vegan pulled pork/carnitas/barbecue?
8
Pepperoncinis vs Banana Peppers
14
What kind of vegetable has pink and white concentric rings?