What to look for in a kitchen scale

I'm wondering what considerations should inform my decision. Possible points include:

America's Test Kitchen did a segment on digital kitchen scales. Their judging criteria were:

To answer your specific questions:

Generally, I'd suggest trying to make sure the display and buttons are easily accessible, even if you've got something big on it. That often means something that looks more like the one on the left than the one on the right: 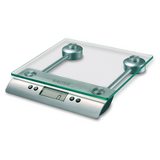 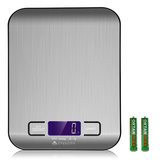 If the buttons and display are on a single flat surface along with what you're weighing, that can work, just try to make sure it's pretty large.

If it's all flat and too small, then it'll be a pain at some point when you weigh something big. If the buttons and display are all the way at the front, with a bit of space below the weighing surface, and angled, they'll be easier to get at. Between your two options, the flat one probably comes out a bit ahead in this regard, because the one with a raised platform has the display way up next to the platform anyway, instead of out at the front where it's easy to see.

Beyond that, most everything is probably fine - it'll all be accurate enough, and it's a simple device, not like there are really any bells and whistles to worry about.

For waterproofing, water resistant seems like enough to me; it's unlikely you'll ever need to do much more than wipe it down.

If you do really like one of the flat ones, or you really want something that you can store in a narrower space, just figure out the dimensions and compare to the size of the things you're likely to put on it. A lot of them will probably be big enough for most of your bowls, but then there'll be that one time where you for some reason want to weigh in something giant and it just doesn't work. Whether or not you care will depend on how you cook.

Finally, keep in mind that there are broadly two categories: big and small. Your question looks like you're looking for big things (many grams, up to kilograms), so that's what I've addressed. If you want high precision for small things (a few grams), most of that is no longer a concern.

One thing that hasn't been mentioned so far but is listed as "feature" of the first scale you linked is auto-off.

I expect that a manufacturer like Soehnle is able to implement this in a useful way, but better double check how it works and whether this is suitable with your work-flow.

I've met scales with time-triggered auto-off that were extremely annoying: when weighing several ingredients into a big bowl successively, the scale just switched off at some point. If that happens in between adding things, it's not so nice but OKish: switch on and let it tare again, and go on. If that happens while you are actually in the process of adding, well, you have to go on as if there were no scale...

In my experience the only characteristic I'd add to the considerations is: - Ability to switch between different measurement systems (U.S./Imperial vs. Metric)

Some scales seem to try to make the display look more stable (or clandestinely compensate for a calibration drift problem?) than it is by not reacting to very small, slow weight changes until a threshold is reached - e.g., if you try to add baking powder by the gram you will get no change in display for the first few grams, then a sudden jump (or the small weight even never registers!). An unwanted feature.

Also avoid designs where the weighing surface is mounted in any way that can easily let it snag/bind to some part of the base - this can give you seriously wrong results that still look plausible enough.

Closely examining designs that seem to have the tare button in a spot where it would influence the measurement is indeed wise: There will likely be some software trickery involved (my first guess at how to do it: Have the scale periodically store a 100-to-200-miliseconds-ago value and actually use that value the moment the tare button is triggered) - which could be buggy in all kinds of ways.

Also, avoid extra features (timers, conversion) etc - you will have forgotten how to get back to weighing mode, and thrown the manual out, when the day comes that you accidentally activate them.

Ps. There are usually some simple sanity-check weights around in a kitchen: unopened 1 liter juice and milk cartons will usually be within 10% of a kilogram; commercially bagged flour and sugar (unless it got wet) .... these certainly will show you if your scale is weighing seriously LOW (which is the most likely thing to happen with mechanical defects).

Also, if you are low on shelf space: Make sure there is a wall-hanging hole. And get a scale that is rugged enough to survive occasionally being dropped on the floor (if that actually happens, sanity check it!) when missing the hanger :)

If you want consistently very accurate results, you can get a model that lets you calibrate the scale using known weights. This is especially helpful when you replace the batteries.

The MyWeigh i2600 has the calibration feature; the weights are an optional feature.

I'm wondering what considerations should inform my decision.

Should the scale be waterproof? Is that useful?

I don't know if my electronic scales over the years were waterproof, I never needed that feature.

On a related note, what considerations should one give to being easy to clean?

I prefer the type with a neat, clean surface (no ridges etc.). One good swipe, that's it. They don't come into contact with food, the way I use them (unless I spill stuff on them while dropping it into the container sitting on top).

Apparently if the tare button is on the weighing surface, it can distort/bias the weight measurement by a few grams.

I guess that would be a pretty unfortunate design...

Just a single flat surface. What happens if your pot is just a bit too large?

Finally: I like the Soehnle 67079 myself. It hits all the sweet spots for me. Clean surface, simple design, nothing to come off, fall down etc., real AAA batteries instead of button cells, near indestructable. Unfortunately, at least amazon.de does not offer it anymore, so it might be discontinued (?).

I have one that includes a digital watch. That means it runs out of battery everytime I need it for something important.

Had I been aware of that, I would have chosen a model, that did not use power when not in use.

So get one, where off means off.

A minor feature is a hold function and a beep.

This retains the last measurement for some amount of time so you can unload the scale, and then read off the number.

By comparison, an old spring balance would loose the measurement as soon as the item was lifted, so if you're weighing a big thing it can be hard to see the display.

The beep lets you know that the sensor settled and reading was done, again while not being able to see the display.

For a larger scale, there should be a large enough platform so you can safely put on a larger container.

Buttons and display should be easily accessible at all time.

Get something with proper buttons. I had an old scale where the buttons where touch style controls and barely worked at the best of times, sometimes adding weight to the scales would reset it.

Waterproof I wouldn't say is a huge concern, I can't think of a time where I would be all that worried about getting a scales wet.

Easy to clean is handy, but it depends how you weight things. I usually put a bowl on before putting whatever I'm weighing in that so the scales don't get dirty usually, but if you were weighing things like butter directly on the scale then easy cleaning is better.

I've never had any issue with the pare button either so I'm not sure if that's something to be worried about.

I'd add checking the maximum weight capacity of the scale. Most cooking scales top out at a surprisingly low weight and exceeding that will damage the mechanism.

I've had to watch out for that when doing a double batch.

Not the answer you're looking for? Browse other questions tagged measuring-scales or ask your own question.

23
Which measuring scale should I buy?

13
Why buy a more expensive kitchen scale
3
How accurate are kitchen scales?
2
How to measure 7g yeast and 10g salt without a proper scale?
0
A strange problem with BWT Initium 2.5 l filter's scale
23
Which measuring scale should I buy?
18
What are the risks to store a digital scale under an object?