I once heard that one type of canned tuna is prone to have less mercury (poison) based upon the size it is at harvest or the location where it is commonly found. I buy Genova brand which has both kinds packed in olive oil. They are both the same cost so getting the "safer" one is a no-brainer. Can you shed some light on this subject?

The Environmental Defense Fund has made a few recommendations based on EPA guidance:

Canned white, or albacore (0.32 parts per million of mercury). Children under six can eat up to one 3-ounce portion a month; children from 6–12, two 4.5-ounce portions a month. Adults, including pregnant women, can safely eat it up to three times a month (women, 6-ounce portions; men, 8-ounce portions).

Canned light — the safer choice (0.12 parts per million of mercury). Children under six can eat up to three 3-ounce portions per month. Older children and adults can safely eat it once a week. But look out for "gourmet" or "tonno" labels. They are made with bigger yellowfin tuna and can contain mercury levels comparable to canned white.

A better alternative is canned salmon (mostly sockeye or pink from Alaska), which is low in contaminants and high in heart-healthy omega-3s. It's also sustainably caught in Alaska and similarly priced, making it a great choice all around.

They may say "safer choice" but what it comes down to is that regardless of which type of tuna you eat, you're going to be getting a pretty high amount of mercury if you eat it frequently. Mercury accumulates in animals higher up in the food chain. I hate that I'm screenshotting an svg in order to post it but below is a helpful little diagram: 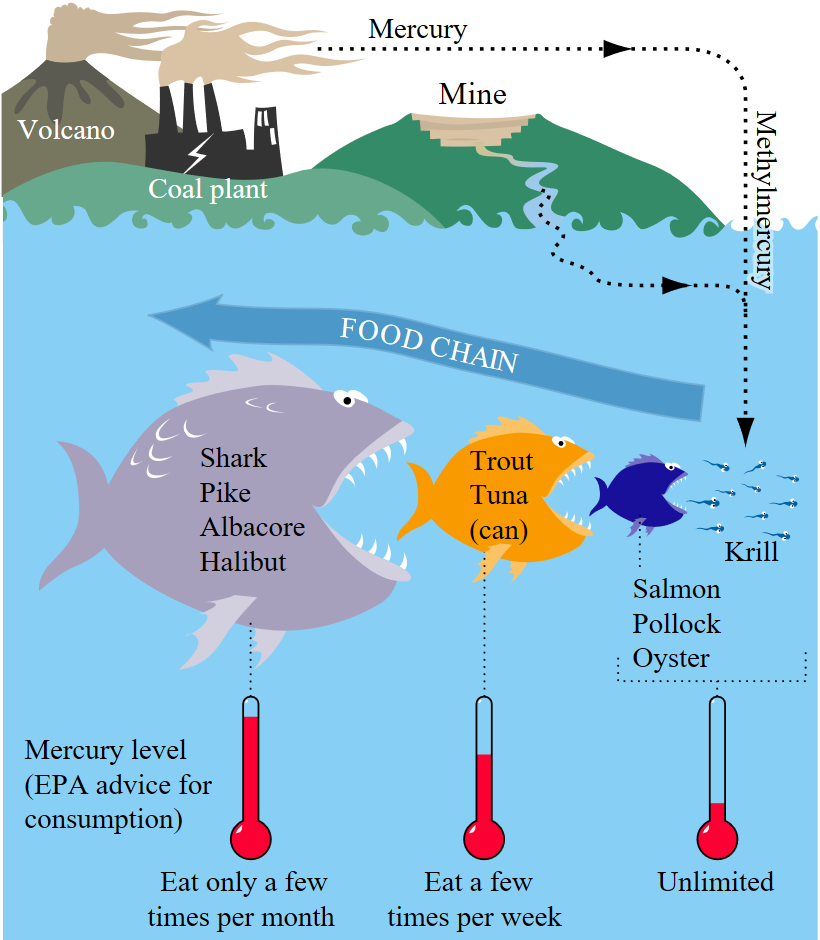 I included the part regarding salmon from the EDF source because salmon is just a better choice to make environmentally and for your health. I know your question was albacore versus yellow fin, but the difference there is negligible. The light vs white is a matter of which cut of the fish you get and that does matter, but you're still getting a fair amount of mercury. Eat smaller fish, like salmon, herring, sardines, kippers, etc. if you are truly worried about mercury.

Albacore Tunas live 11-12 years. Yellowfins only live 5-6, so have less time to accumulate mercury. Skipjacks are in between.

Not the answer you're looking for? Browse other questions tagged ingredient-selection tuna or ask your own question.