Do yellow lentils sprout after submersion for a few hours?

Yellow lentils. Not consumed fast enough. Organic. Bought bulk at a health food store 28-29 months ago and kept in a sealed jar.

After leaving them in water for 3-4 hours, they seem to be sprouting. Is that possible, so fast?

One concern is that the sprouting tips appear to be breaking off. Is that a sign that storage for nearly 30 months is excessive and the jar should be discarded?

Worst case scenario: the minuscule tips that appear to have broken off are entirely static (they do not move). Could these conceivably be (dead) worms?

Another thought: my indoor potted plants seem to blossom quite happily in April. It's as if they know it's Spring, despite being in constant temperature year round. Do lentils also sprout more eagerly in Spring than in Fall/Autumn?

(Note to self: must eat grains and lentils more regularly.) 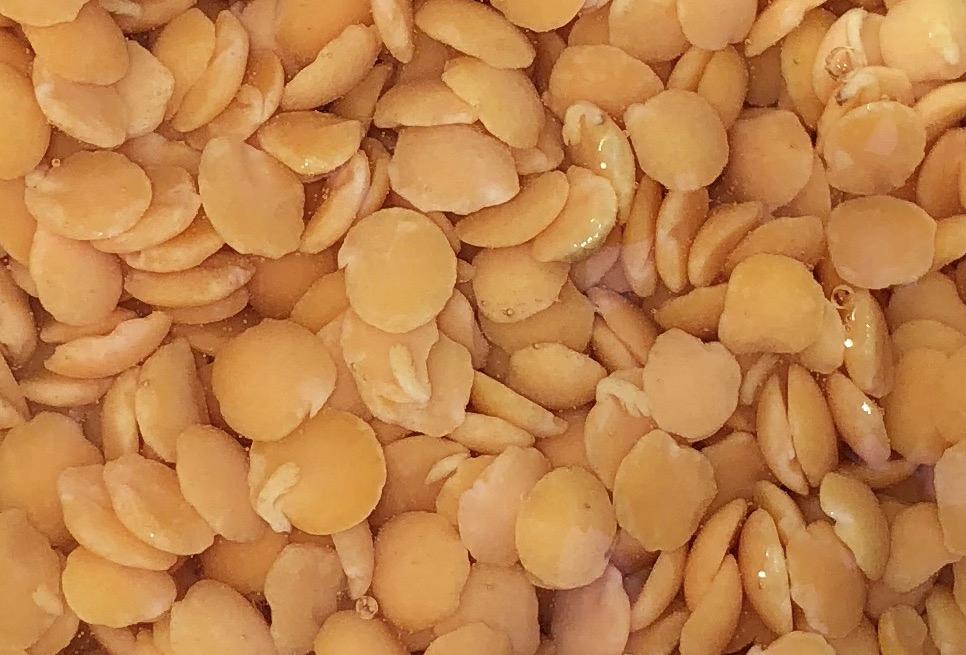 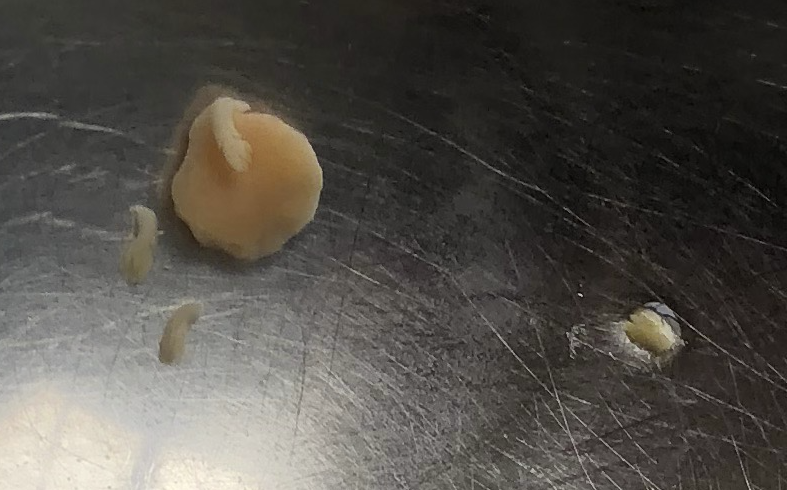 You correctly identified the little white things as sprouts, or technically the plant embryo. (So no insect larvae - phew!)

But assuming that your lentils are already sprouting after three to four hours is a bit optimistic, even in Spring. If you split open a lentil or other legume seed, you will notice that the plant embryo is quite distinctive already when the seed is ripe and dormant. In your case, your lentils are actually peeled and halved1, which will of course expose the embryo, which is usually hidden between the two halves of the seed. So I’d expect less than 50% of your lentils to have the white thing - less, because it’s a bit brittle and some will have fallen off during production, handling and storage. You should be able to see them in the dry lentils and even better now that they are soaked: they get lighter after a while.

Lentils are pretty robust if stored reasonably, so unless you noticed a rancid smell, your batch should be ok to cook. (Split lentils are sometimes oiled very lightly, and this oil can get rancid, hence the smell check.) You might have to cook them a bit longer, but that’s about the only issue with older lentils I would expect.

Side note:
If you want lentil sprouts for the kitchen, make sure you use whole lentils and soak them for a few hours, then rinse and drain twice a day. The usual time from seed to sprouts is four to six days. And in this case, “fresh” ( < 1 year) seeds are the safer bet.

First off, no they are almost certainly not dead worms.

What you are looking at inside the lentil seed is the embryo of the future lentil plant. Soaking makes the whole seed expand as it takes up the water, and sometimes the two halves of the seed come apart so you can see these little plant embryos better. But they are contained in the seeds all the time, even before you start soaking them. When you eat peanuts (also legume seeds, just like lentils are), if you look at the inside of a split open one, you can see the embryonic plant really well because they are so big.

Maybe technically speaking, your lentils are sprouting in some microscopic way from the moment they hit the soaking water, but usually when people say "sprouting", they are talking about when the little root of the plant has started to develop and starts poking out of the seed in a visible way. This wouldn't happen in just 3-4 hours. Maybe at the very least a couple days.

As far as the age of your lentils, 30 months isn't too long at all as far as edibility goes (as long as you kept them dry and in decent conditions), so don't throw them out. If you bought them intending them exclusively for sprouts, sorry, I don't know whether 30 months is long enough to diminish their "sproutability" significantly. But I'd be surprised if at least some of them wouldn't start to sprout after a few days.

Also, sorry I can't answer about sprouting more readily depending on the season. Certainly beans will sprout all times of the year, but maybe someone with more experience can say if they do it quicker in the spring or not.

Not the answer you're looking for? Browse other questions tagged storage-lifetime lentils or ask your own question.

13
When “sorting” lentils, what exactly am I looking for?
2
What is the appropriate lentil-to-water ratio for stovetop lentils?
6
What ratio of rice is needed for lentils to be a “complete protein”?
2
Is it normal for the colour of the cooked lentils to change overnight even when they were kept in fridge?
2
Cook lentils before or after shaping into veggie meatballs?
2
Different cooking times for red and brown lentils?
2
Mustard seeds for tempering lentils brought out a little bitter after taste
1
What is the ratio of baking soda to water for lentils?
0
Soaked red split lentils overnight for tadka dal. Proportion water to boil them in by weight? Any way to prevent the foam-up?
5
Cooking vs Soaking Lentils for Falafel