According to wikipedia, the smaller the leaf (especially the buds) the more valuable it is.

Tea leaves of different sizes just after plucking. Small leaves are more valuable than big ones.

From what I gather, the biggest quality pickings are the buds. Also, tea quality grading takes into account how many leaves were plucked alongside the young leaves.

Pekoe tea grades are classified into various qualities, each determined by how many of the adjacent young leaves (two, one, or none) were picked along with the leaf buds. Top-quality pekoe grades consist of only the leaf buds, which are picked using the balls of the fingertips.

Why does the number of leaves that were picked alongside the bud matter? 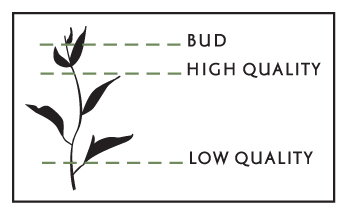 Before I answer this question, the focus on small leaves and young buds is mainly relevant for green and white teas.

This category of teas are very lightly processed and are therefore very 'raw'. Using very large leaves would result in a more bitter brew. Therefore small tips and buds are the best and result in more delicate brews.

The smaller leaves are also picked in early Spring. As the temperatures are low, they grow slower and are thus richer in flavor.

These Spring buds have less supply, while there's less demand. As you can imagine, that results in higher prices.

Do some empirical research and go into your garden and taste some of the flowers, buds, small leaves and old leaves.

Warning: Do this only if you know something about horticulture and botany as you want to avoid poisoning yourself! ;-)

Therefore: the buds are "most valuable", the small, young ones are "more valuable" again until the larger, "older" leaves: it's a combination of taste, age and economics...

Green tea has existed forever, black tea is a recent invention from the 1800s whereas white tea is just an extremely recent marketing fad as this Ngram chart clearly shows:

Other answers have spoken to why the buds and tender leaves are considered of higher quality, so I thought I'd weigh in on why the number of leaves picked alongside the bud matters...

I would guess it would be because this kind of grading works when the leaves and buds are not separated, so buds picked by themselves make a tea blend that is 100% bud, buds picked with one leaf end up with a proportion of 50% bud and 50% leaf per serving/container, and buds picked with three leaves are 25% bud and 75% leaf - while the actual proportions are likely more handwavy than my 1-to-1 assumption, the basic idea that the more leaves are picked (per bud) the fewer buds you'll get in any given serving of tea, holds true.

It is also relevant, though not quite as strongly so, that it takes more work to be more precise (picking only the bud vs the whole branch-tip), and more smaller leaves to gain the same weight of tea as larger leaves, so the effort expended is quite different which also weighs in for what the tea is worth... though without a discernible quality difference, the effort alone might not be worth nearly as much of a price difference outside some rather specialized markets. Costing more because it's harder to do is as valid as costing more because the quality is greater, just look at artisan vs mass produced prices.

8
Why does unsweetened tea get colder, faster than sweet tea?
3
What Tea leaves are used in Kashmiri Pink tea
0
Why should I prefer tea dust over crumbled tea leaves at home?
1
Can anyone identify this type of green tea?
4
Techniques to toast mate tea leaves
4
What is the difference between small vs large loose leaf tea?
1
Better way to make Iced Tea
4
Tea leaf grades and plucking standards
3
Why are multiple infusions of tea better than one large one