How are pulses split into dal?

Since dal is simply dried, split pulses I was wondering: how are the pulses split?

Is it that when they are dried they become easy to split, is the dal "cut" in a certain way, or is there some other technique that is used to separate dal into perfect halves?

It happens more-or-less naturally. Most legumes have a seed structure with two large cotyledons that serve as storage reserves for the developing embryo, which is nestled between them at one edge of the whole structure. This is easily visible in the peanut (which is botanically a legume and not a true nut): 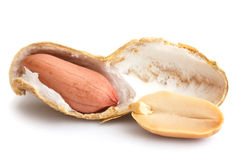 The outer pod that splits open serves to protect the seeds. Each of the "nuts" inside is a whole seed. On the left is one with the outer coat intact (very thin and papery for peanuts, but often substantially tougher for other beans) and on the right is a split nut. This is a single cotyledon or "lobe" with the small embryo (which looks almost like a separate seed) visible at its left tip.

If you look closely, other culinary legumes share this same structure; even lentils have a tiny seed visible at one edge. The lobes meet against each other with flat edges and will separate easily once the legume is dried. They can still be held together by the outer skin or coat, which varies in thickness; beans tend to have thicker coats, lentils much thinner ones. Once the coat is removed by peeling or rubbing, the dried legume will separate easily into halves with additional quick rubbing or tumbling. This in turn increases the surface area and allows the legume to cook more quickly.

To add something on the practical side: the splitting is done with machines like this: 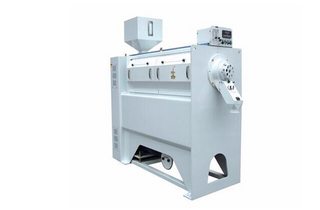 The lentils are poured into it, and come out dehulled and split.

From the manufacturer's description,

So, as logophobe said, it is a matter of "quick rubbing or tumbling".

Not the answer you're looking for? Browse other questions tagged pulses or ask your own question.

1
How do you split Chickpeas?

2
How To Get Flavour Into Dried Grains And Pulses
3
Soaking pulses overnight: safety vs refrigeration
3
Split pea soup won't soften. Any way to soften the peas without burning?
1
How do I know when yellow split peas are cooked?
0
How can I make shami kabab without chana dal