I just made a White Chocolate Raspberry cheesecake, and it ended up being a failure appearance-wise.

For some reason, it cracked a lot, and the batter ended up super lumpy, so the cheesecake is all heterogenous looking: 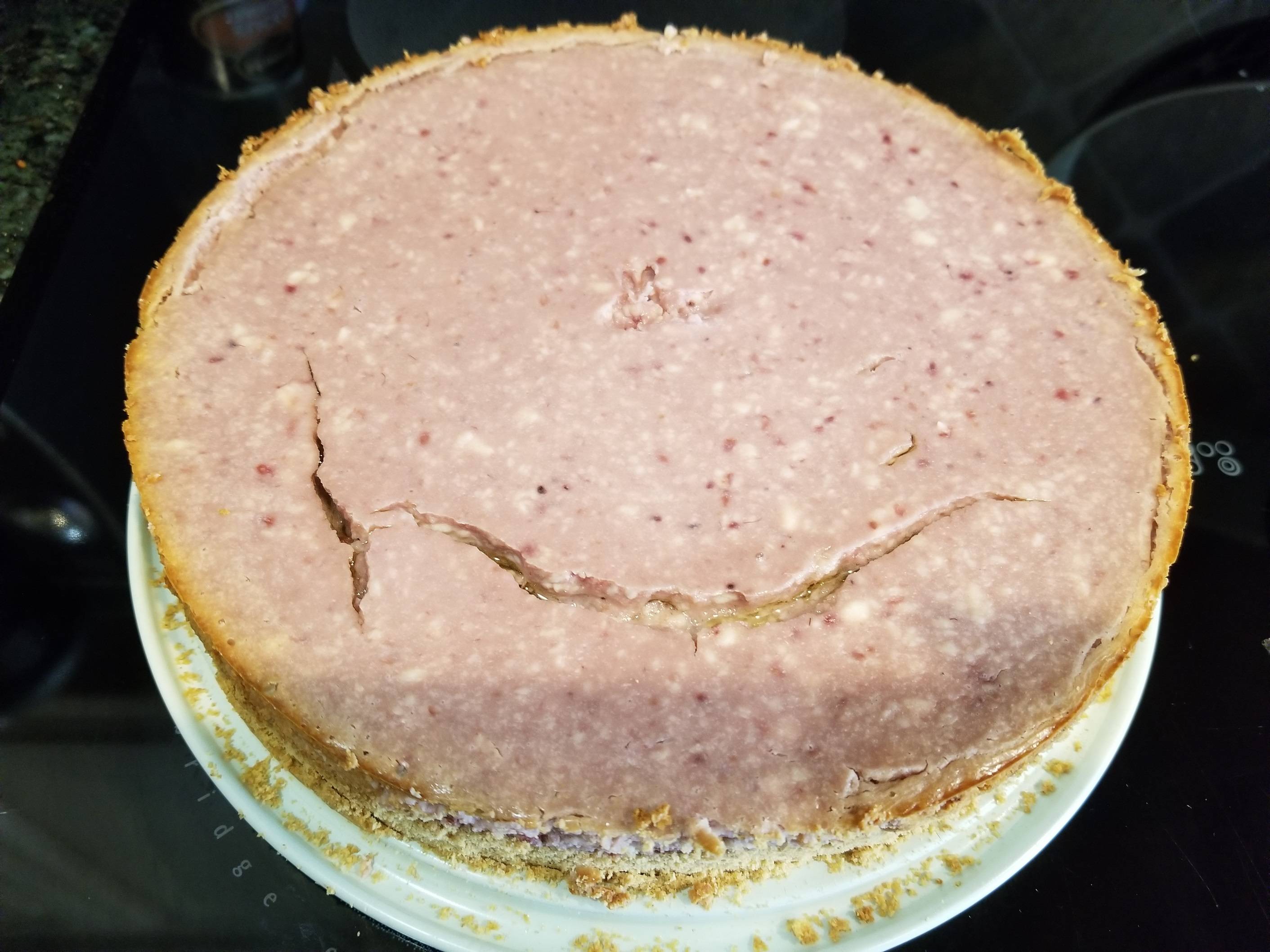 The main problem though can be seen in the large crack at the bottom of the image. For some reason, when I took it out, there was liquid pooling in the cracks. I tried wicking it with some paper towel, and it came out yellow. I felt it, and it was greasy. The only thing I can think that it might be is butter.

I've never had this happen before. It must have been because to make a chocolate layer in the middle, I added some butter to the chocolate to thin it a bit (~1 tsp/oz of chocolate), and I must have overdone it. I was BS'ing this recipe as I went, so I don't really have a recipe book to blame here.

Now, I can't taste it because it was made for someone else. I have no idea what the "damage" is in the inside. My problem now is deciding if it's salvageable, and how to go about fixing it if it is.

I've been wicking the butter out with a paper towel, but that doesn't get much, and I don't want to risk widening the crack further.

So, after chilling it overnight, the butter on top seemed to have receded back into the cake. At that point, I was worried less about the appearance (because that was already out the window), and more about it being a butter-sponge when bitten into. I guess after the fact though, there's likely nothing that can be done about that.

And I've already given it to the ""customer"" (a coworker). I offered to refund it if it's inedible. She's convinced that it will be fine, but we'll see.

From this point, I'd like to know how, in the future, a situation like this can be dealt with should it happen again.

Here's the recipe that I had put together by the end:

Edit: I asked the buyer how it was. She said it tasted fine, but that the chocolate layer had an odd consistency and crunchiness. Apparently the oozing butter was non-consequential.

I would suggest using a bit of simple syrup or maple syrup instead to melt the chocolate, if you want the taste of butter, add a little bit of flour to the butter first when melting it to make a little bit of a light roux.

The problem is the chocolate and butter for sure will separate at the temp that a cheesecake bakes at, there's nothing for the butter to cling to.

Firstly, cheesecakes should always be baked in a water bath to prevent cracking. So if you place your springform pan into a larger pan, of any size, and fill that large pan with ~1" of boiling water, then put it into the oven to bake, you shouldn't see those large cracks. The steam from the water will keep the top of the cheesecake hydrated so that it won't crack.

Secondly, this is exactly the instance where a ganache would have worked better than chocolate plus butter. The heavy cream in a ganache would prevent the chocolate from hardening in the fridge, as butter also hardens in the fridge it isn't the best way to counteract that textural "crunchiness" your colleague mentioned. A good ganache for this would be 8oz chocolate, 6oz cream - bring cream to boil, pour over chopped chocolate (aim for chocolate chip sized chunks), let the cream sit over the chocolate for 30-60 seconds and then use a whisk to combine from the center outwards. This will leave you with a silky smooth ganache that won't harden in the fridge.

I usually bake my cheesecake,1st at 175 celsius for 10-12 minutes,than at 100 celsius for 30 minutes.I use a tray with water ..inside the oven,the steam from it hepls the cake to bake uniformly.After the time ended,I leave them in the oven to chill down.I would try something else instead of that chocolate with butter,maybe a white chocolate ganache or dark. In your case I would have covered the cracks with a layer of raspberry or wild berry jelly..Problem solved ;) 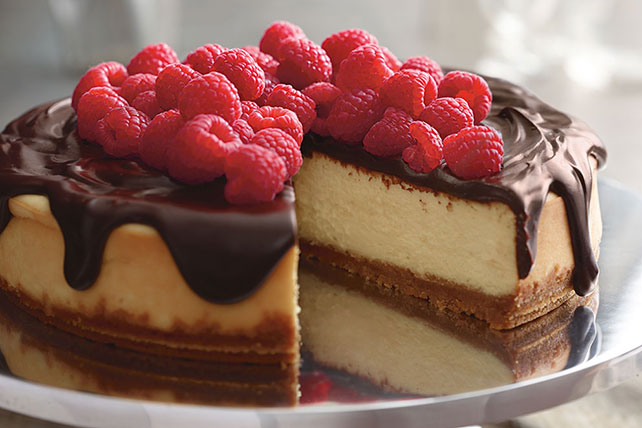 Not the answer you're looking for? Browse other questions tagged cheesecake or ask your own question.

3
Cheesecake Cooking Time Change with Pan Change?
3
Preventing chocolate from burning, when its used as the crust of a New York style cheesecake
4
Can fruit juice be used to hold a cheesecake crust together?
3
What is in a Jamaican Chocolate Cheesecake?
11
Recreating an accidental crust effect
3
What adjustments when doubling a cheesecake recipe?
4
How to keep a cheesecake layer seperate from filling during baking?
1
Make existing cheesecake recipe chocolate?
1
Ways to Make Matcha Powder Less Bitter in Baking?