The Problem: Recently, I've been on a pulled pork kick. My go-to method has quickly become pressure cooking, since it's relatively quick and it allows me to set the timer and forget about cooking for a while. The problem is that my meat frequently ends up being greasy, occasionally up to the point that it's nearly inedible.

The Info: I'm using bone-in boston butt roasts, between 3 and 5 pounds. I typically cut it into three or four pieces, and brown them before cooking. I pressure cook (using an 8 quart InstantPot) for 110 minutes, then let the pressure release naturally for about 20 minutes before opening the pot and shredding the meat. I shred it in the juices at the bottom of the pot (usually just a few tablespoons of broth/liquid smoke is left after cooking, along with a bit of rendered fat).

The meat is always super tender and shreds easily, and I have no complaints as far as taste or texture. It's just so damn greasy! I can't eat more than a few bites before feeling sick.

1.) How do I correct this BEFORE cooking? Different cut of meat? Should I trim it more? Cook it with some other ingredient?

2.) How do I correct this AFTER cooking? Is there something I can add to either remove, or mask the greasy flavor?

So far I've been liberally using a vinegar-based bbq sauce to cut the greasiness, and keeping my dryest red wine handy to wash the flavor out of my mouth. Can you think of any better options?

I doubt that your meat is really greasy. If it is really overly fat, you will notice it when buying it, your meat will be marbled through and through. But it is difficult to get such meat nowadays at all, since it is rather expensive to produce.

The mouthfeel you describe is more likely to come from the gelatine. When you make pulled pork in the pressure cooker, you are converting the connective tissue to gelatine, leaving the overcooked muscle fibers swimming in it. When warm, it is really slippery, and the meat slides around in it - this is exacthly what makes for proper pulled pork that shreds. And making gelatine from collagen is not that easy. Traditionally people tried to convert as much as possible by very long cooking times, but using high pressure is much more efficient. So it is likely that you are ending up with more gelatine, or better hydrated gelatine, than with traditional cooking.

The first thing you can try to do is to just learn to like it. There is nothing inherent in greasiness which makes people sick eating it, that's a learned aversive reaction, which can be unlearned. With the knowledge that it isn't actual fat, that reaction can subside or disappear. You can try some mindfulness meditation on some bites of the meat to get accustomed to the mouthfeel too.

If you insist on reducing the sliperiness, you might have to make your process less efficient. This means going to a more traditional stovetop recipe without pressure. I don't know if your exact InstantPot model can cook in slowcooker mode without pressure, but if it can, you can keep the convenience of set-and-forget. You will probably have to live with other changes in texture though, not getting such a nice separation.

Gelatine loses its gelling strength with low pH. So you are on the right way with sour sauces. You can try to marinate it with them, and keep a sour sauce in the pot while cooking it, not just adding it at the end. But then you will end with more of a braised meat, which you might not like.

In general, it is difficult to give more advice, because this is exactly what makes your pulled pork good pulled pork. Anything you do to disrupt it will lower the quality of the texture you get.

I will say many people prefer the boston butt because of its fattiness. Even if you want to eliminate some of the intense fattiness I would do so after cooking because the rendered fat cooking through the meat helps keep it moist through the cooking process. Also vinegar is a common solution. I usually do a cider vinegar and brown sugar solution (the sweetness also helps cut the fattiness)

There is a certain point where the finished product can be too oily but if you make it a few times you will learn how much fat to trim off to suit your needs.

I would go for option 3): correct it DURING cooking. Have you already tried cooking it shorter? 110 minutes seems extremely long in a pressure cooker, especially considering that you add another 20 minutes of cooking time after that for the pressure relief.

Most pressure cooker pulled pork recipes I can find on the internet are approximately 45-70 minutes depending on the size of the cut. I would go for about 55, although this may depend on personal taste, equipment and pressure relief time. This should be plenty to pull the meat apart easily, but not so long that you get a fatty, gelatinous dish.

You picked a high fat cut of meat and you are cooking it in the fat. It is actually from pork shoulder.

There is not a substitute for pulled pork so look for a less fatty pork butt and trim the fat. But it is hard to trim the fat as it is marbled in.

Cooking in the fat you are absorbing much of the fat back into the meat.

Long cook but smoking will let some of fat drip out and still tender. The smoke will mask some of the grease flavor.

Maybe go with a spicy dry rub and smaller portions.

A lot of meats have less fat but that would be another dish. I cannot think of a lower fat meat that has a similar taste. 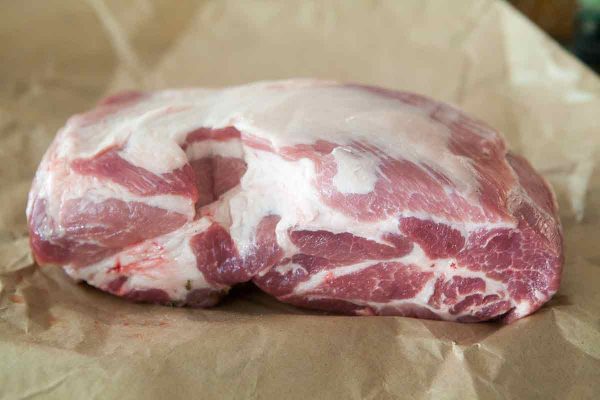 If the grease is floating around on top, you can probably soak it up into a slice of bread, that you later throw away.

One thing you can do with pulled pork that contains a high amount of integral fat/grease is to spread it out in a single layer on a sheet pan -- a few larger chunks are OK, but aim for 1/2" or smaller -- and place it under a high broiler for a few minutes until the edges start to brown and turn crispy.

This is one way carnitas can be finished for serving. Carnitas is pork shoulder that has been slow-cooked in fat.

Aside from adding flavor (Maillard reaction), frying or broiling the pork this way produces a firmer texture that goes better with the fattiness. Cooking it further also dries out the meat a little more, but not in a bad way (pulled pork is already "overcooked" in a sense). What most of us think of as "greasiness" is not just about fat content, but also remaining water that combines with the fat to create that heavy, greasy feeling. This is why deep fried food that wasn't fried in hot enough oil can come out feeling greasy -- the oil wasn't hot enough to drive out the surface moisture properly.

You're on the right track here. You want to add some kind of acid after cooking to cut through the greasy, gelatin-y mouthfeel. With BBQ pork, you'd commonly use vinegar (preferably cider vinegar) as the acid. You could use it plain if you want the meat to be unsauced. Or you could make a "finishing sauce" which also includes typical BBQ sauce ingredients like brown sugar, molasses, and spices. Actual BBQ sauces, particularly the Carolina styles which are heavy on vinegar, are just extreme examples of a finishing sauce.

For something like carnitas, you might use citrus juice as the basis instead. The pressure-cooker carnitas recipes that I've seen usually call for orange and lime juice, for example.

When a slow cooked stew is allowed to cool, the fat solidifies on the top layer and there is a layer of gelatin below that. Your situation is the same. I suggest you cook the pork in a larger amount of liquid so it is still covered after the cooking time. Then let the mix cool before removing the layer of gelatin (and fat if desired). Then cook more until the liquid reduces. I would put the liquid in a pan and reduce to a thick sauce on high heat for about ten minutes.

Not the answer you're looking for? Browse other questions tagged pork pressure-cooker or ask your own question.

5
Smoking pig butt: how to resume?
7
What am I doing wrong with my pressure cooker?
3
Sous Vide Pork Butt Char Siew (Chinese BBQ)
2
Pulled pork too sweet
3
Does a pressure cooker really cook food evenly?
1
How can I get my flavorings to flavor my carnitas all the way through the pork?
10
Pulled beef in pressure cooker: Is it necessary to sauté beef before pressurizing?
0
Pulled pork slightly too tart and watery
1
What are the effects of resting (or not) carnitas meat after the initial braise