How does dried cilantro relate to fresh?

Is coriander dried cilantro seed? Has anyone used dried cilantro, and if so how does it compare to fresh cilantro. I assume fresh is better but please describe the difference (less pungent, etc...)

As for dried cilantro, the leaves? They're going to be pretty much flavorless compared to fresh cilantro. Cilantro loses its aroma quickly when heated or dried. Obviously there's still something left, or you wouldn't be able to buy dried cilantro, but it's not going to be a striking addition to a dish. If you can get it fresh, it's worth it.

These are the seeds:

These are the leaves of the more common variety (there are many others): 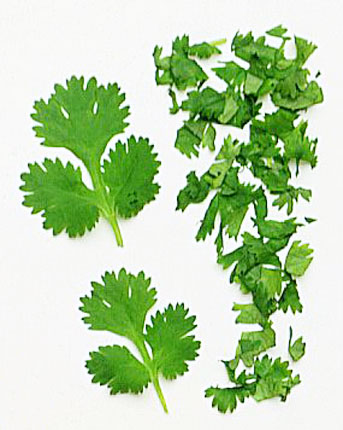 While dried seeds are full of aroma and flavour, dried leaves are not.

BTW, it is VERY easy to grow cilantro (as parsley) in a pot, just use the seeds ...

Instead of drying the cilantro, why not just plant the other half in good potting mix? You won't have to run to the store for fresh then. It grows quickly too!

I have both dry and fresh. The dry doesn't stack up. It has a much less pungent flavour. It's good in a pinch.

It tastes foremost of "generic dried herbs" - the typical hay-like, bitter taste with a note of cilantro. It is mostly sold so people can put a checkmark next to the "cilantro" line in a recipe.

While applications exist and have been mentioned in other answers, it is not a valid substitute for fresh or frozen cilantro (which I heard exists in some places - not here unfortunately, and it does not home freeze well).

Dried cilantro brings a mild herbaceous favor to soups and stews but it is not a substitute for fresh cilantro. If you take the notion of subbing for the fresh stuff off the table, dried cilantro is interesting... I often use both because they bring completely different things to the party.

Coriander seeds are yellowish and therefore the ground version is also grey yellow in color.

The tastes are completely different - the ground seeds have a pungent taste and are not used in salads or cold dishes.

The leaves, whether dry or fresh can be used as is without cooking, e.g. add them to a salad.

I have heard to use twice the dried if the substituting for fresh in a recipe. Joy of Cooking has good substitutes listings including dried for fresh.

AleksAleks
1
1
Add a comment  |
Highly active question. Earn 10 reputation (not counting the association bonus) in order to answer this question. The reputation requirement helps protect this question from spam and non-answer activity.

Not the answer you're looking for? Browse other questions tagged spices cilantro or ask your own question.

9
How long will a fresh herb paste last?
5
Convert seed based measurements to pre-ground?
1
How to defrost coriander / cilantro?
2
What can I use in Thai curries instead of cilantro or coriander root? (Allergy)
3
What is White Cumin and Green Cumin?
1
Solutions for a bland vegetable curry