Is it safe to store dry food products under the sink?

I'm in an apartment with limited kitchen storage space. I want to store some dry food products like tea, coffee, cereal, rice, etc. but the only place I found for them is basically under the sink (actually, it's not directly under it, but it's one of those sketchy areas with a bunch of pipes; next to the dishwasher): 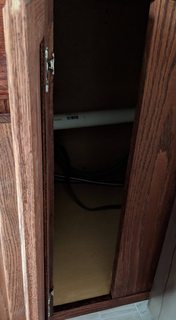 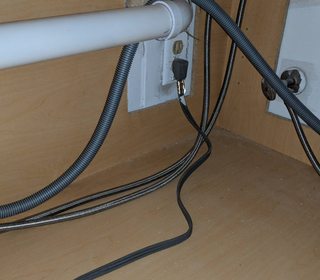 I've always been wary of storing food down there for no other reason than it feels like a dirty place. Will dry food be safe down there assuming I don't also store cleaning products down there?

Your concerns would be moisture, insects and/or rodents. Simply put your products in airtight containers. You'll be just fine. (By the way, my mom always stored onions and potatoes under the sink).

Am hoping you have thought of sink leaks. I would not prefer to put any dry foods under sink but if that's the only place left, why not put non food items under the sink.

The concern I'd have is not the details of the food per se, but some more practical concerns.

From what I see in the pictures, you have not a clean cabinet there, but one with various connections. If this were actually under a sink it would likely include the water turnoff; while you say this isn't actually directly under the sink, it clearly contains the plug for the dishwasher, some pipes across it, and what might be the diswasher water turnoff in the bottom right of the second picture.

Being able to access these in an emergency can be crucial to preventing further damage, whether it is water damage, fire, or other problems. In a restaurant, storing items there would be a code violation in most places for this reason.

These connections also mean you have holes in the cabinetry, which makes it much more likely that vermin of various sorts would get in. While airtight containers will help prevent this, unless you have perfect hygiene and clean regularly it's likely you will end up with vermin eventually here, more likely than other areas. In a residence this is up to you how that tradeoff is handled, but it's something to consider. I wouldn't consider this nearly the problem that the safety issue is.

Not the answer you're looking for? Browse other questions tagged food-safety storage-method storage or ask your own question.

95
Is it safe to put hot food in the fridge?
2
How to authenticate food products?
5
Effects of elevated storage temperature on bread quality
2
What exact temperature allows me to store frozen products really long?
3
How to store batter (contains raw eggs) under 41 degrees F?
2
Are chalk labels on food jars safe to use in the kitchen?
2
Boiled a stainless steel pot dry, safe to eat food from the episode?
6
Are hardware store themocouples food safe?
16
Why store food in an airtight container when it's in the fridge?