Why did my vegan croissants come out flat? 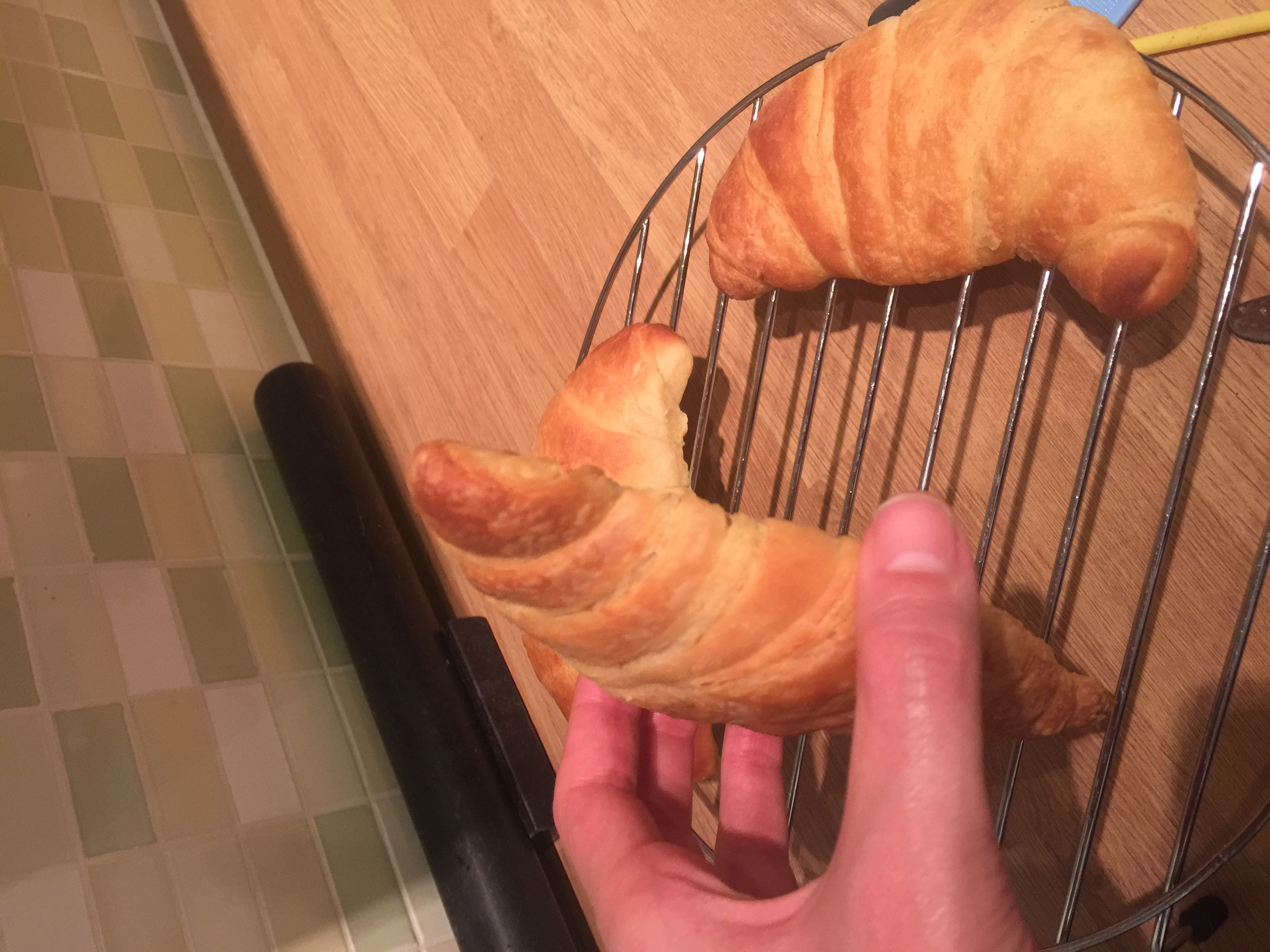 I tried to make vegan croissants with the following recipe:

Anyway- can anyone tell me why it happened - I think it’s because I did a straight swap from butter to margarine - and will be something about how the oils react (I’m literally just trying to work it out based on what I’ve read on google so far but I can’t seem to crack it).

Also because I used dry yeast instead of wet but I’ve seen you can make croissants without yeast so doubt it’s that alone... please help!?!

Would it be better to make my own butter for the croissant dough as I can’t seem to find a pre made one that has the same components (ratios) as butter... I’m based in London...

If I should make my own butter- which recipe would you suggest? I’ve tried three now and still no luck... I can’t seem to get the components to combine fully - which leads to solid butter chunks when I truly to use it for laminating the croissant dough...argh!

If they're your first batch, you did great! Can you show us a cut cross-section? A croissant will have "intra-layer" (inside the dough layers) rise and "inter-layer" (between the layers) rise: The intra-layer rise comes from the yeast and moisture action in the dough itself, and the inter-layer comes from the steam generated as the moisture in the butter/margarine integrates with the dough. I would guess that you didn't get a lot of inter-layer rise, but that's just a guess.

I use the Tartine recipe for croissants (with regular butter), and from memory you work a small amount of flour - say 10% - into your butter before forming the butter sheet. I have seen plenty of recipes that don't do this, but I'm wondering if it would help to stabilise the margarine a bit during the bake.

One other tip, make sure everything stays cold during the laminating. I put my sheet into the freezer for 15 minutes between turns, and I know some methods call for a couple of hours in the fridge (which presumably helps with hydration as well as keeping things hard). If the layers are cold, they stay distinct, which means they separate cleanly during the bake.

Last thing, I think you could bake hotter and perhaps double-glaze (glaze half way through final proof, and then again right before you bake), to bring out the colour on the outside shell.

You don't have enough fat I think. I would use 2 to 3 times as much if I was making croissants with butter. I don't know how vegan margarine reacts but you may want to at least double the amount.

The fat plays a major role in the fluffy goodness (yes, technical term...) of the texture while the croissants bake, as it traps the water evaporating from your dough in each layer, creating pockets of air, on top of those made by the gas released by the yeast.

Which leads me to the second point : a croissant with no yeast is just a puff pastry shaped nicely. Croissant dough is defined by two things : it's layered, it's prooved. Dry yeast is fine, it will come back to life in your dough, feeding off the water and sugars.

Now, a lot of things come into play when making croissants, especially resting and proofing time. Don't rush things, rest your paton for half an hour between turns (4 simple turns should be enough) and after shaping, and proof until they grew by about 50%. Bake between 170 and 190 degrees Celsius.

As Beejamin said though, if that's your first try they look amazing. Good luck !

Not the answer you're looking for? Browse other questions tagged baking vegan pastry puff-pastry or ask your own question.