Can using a poolish or biga preferment help me make a less dense wholemeal bread?

I've taken up bread baking again recently, and I'm trying to improve my skills. One thing that still eludes me is how to get a less dense wholemeal loaf. I know that wholemeal breads are nearly always denser than white breads.

A recipe I used recently was:

First prove was 1.5 hours - at room temperature. After shaping 2nd prove was around 40mins while my oven came up to temperature. It seemed to be proved enough when I poked it. I slashed the top, it didn't collapse or anything. Baked at 250C for 12 mins, then 200C for the rest (total 35minutes) baking, with a tray of water in the bottom of the oven for steaming the crust.

Here's the pic of my bread 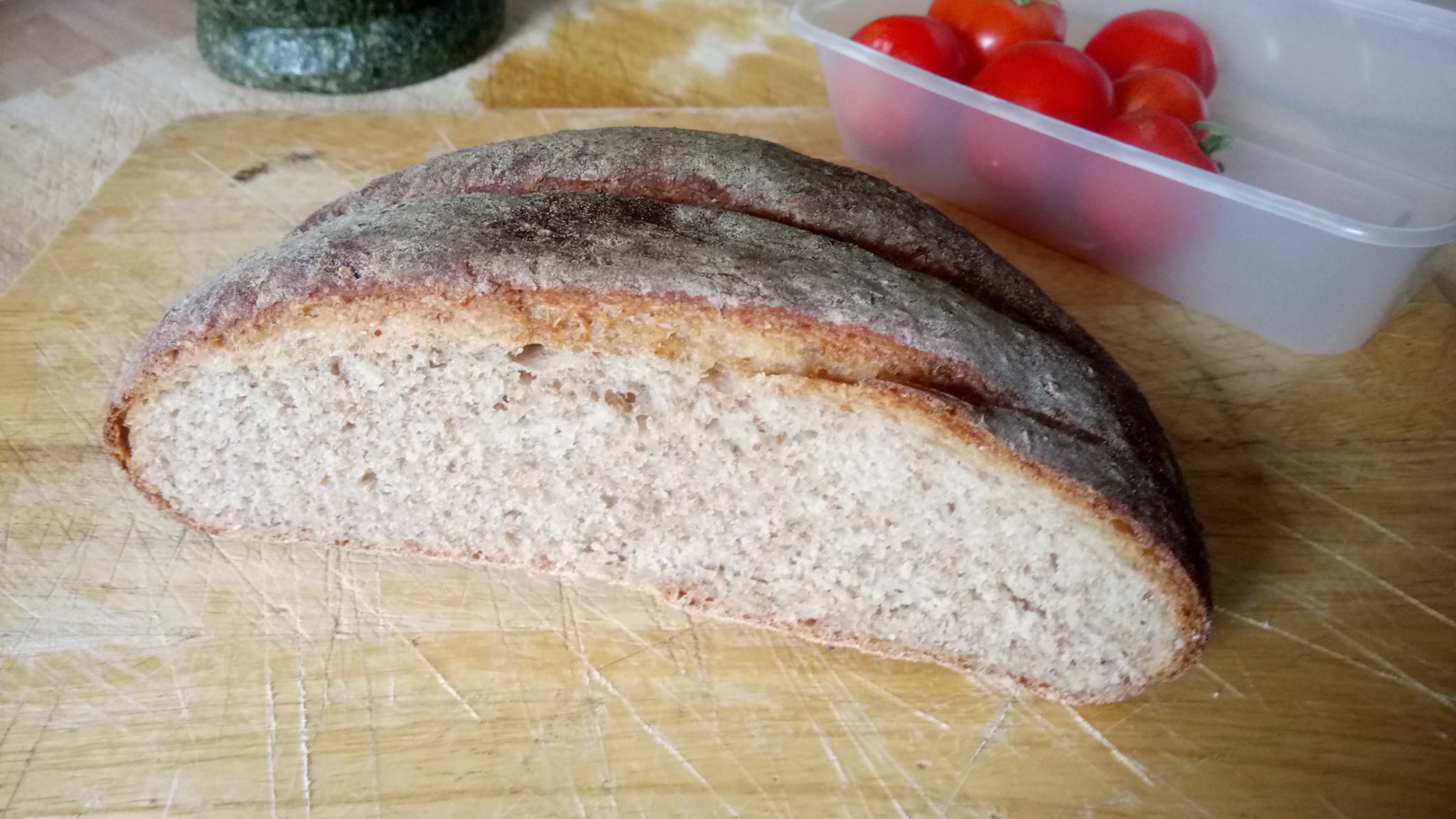 Now don't get me wrong, the bread is nice enough, it has a lovely flavour. However it's denser than I'd like. I need to know if the problem here is the relatively fast leavening process, versus a longer process such as using a preferment like a poolish or biga.

Can anyone tell me, before I try the experiment, if using a preferment with such a loaf would help make it a bit lighter, with a looser crumb? Or am I headed for yet another disaster?

My reasoning behind this is that I've made higher hydration breads before - like ciabatta made with white flour, quite successfully, with lots of air and bubbles, but these usually start with a biga, which sits fermenting 12 to 24 hours in the fridge. I also know that higher hydration has a role in the size of the air pockets. I'm not looking for massive air pockets/holes in my wholemeal bread, just something that's a bit less dense.

Update: Forgot to say, the kneading was 10 minutes at a medium speed in a stand mixer. I mention this just in case it's relevant, although I tested the dough afterwards, and I thought the gluten development was OK.

I think I solved this myself in the end.

Basically I used the same recipe as before, however instead of a biga as I had planned, I decided to try my hand at sourdough. I had started making a starter a while go and thought it was time to give it a go.

This is the second time I tried sourdough, but the first time my starter smelt disgusting so I threw it out.

To activate my starter, I fed it the total amount of wholemeal that I was going to add. Let it sit for 2 hours, and it doubled in size.

I also added a touch more water at 75% hydration. I used the stretch and folding method instead of machine kneading - 4 folds every 30 minutes, 5 times in total. It had a long proof in the fridge for 16 hours, then an hour to come to room temp, shaped and stuck it in a proofing basket, and about 2 hours after shaping it rose again. Also took care when shaping not to knock back too much, keeping as much gas in it as possible.

The result seems almost perfect, even though I say so myself. It's light and airy and bubbly, and delicious, very mild, hardly any sourness at all. I have to say I'm pleasantly surprised. It took a while though, almost 24 hours really.

I think the same would have happened with a biga/preferment, I think the key must be long proofing, giving it time to ferment, and stretching and folding to develop the gluten. I will try it with a biga another time I think. 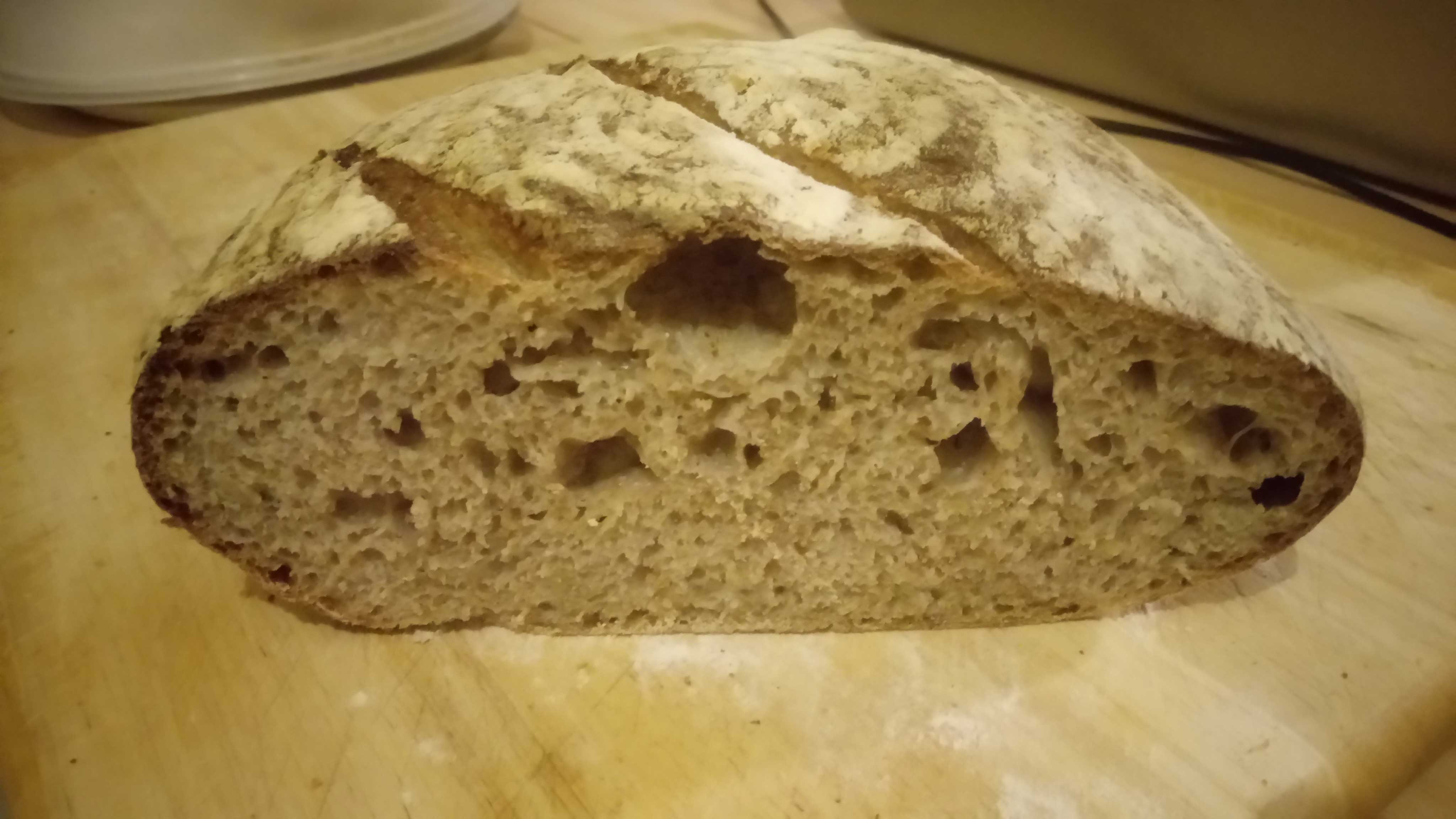 Not the answer you're looking for? Browse other questions tagged baking bread flour biga or ask your own question.

8
How can I make this very low hydration bread more home baker friendly?
5
bread sticky after baking
1
Where can I find a recipe for less-dense coconut bread?
4
How can I make zucchini bread less moist?
5
How do different techniques impact sourdough bread?
5
Are you supposed to get most of the air bubbles out of dough before the second rise?
5
Which types of bread are well suited for overnight proofing and what adjustments are needed?
1
Why was my bread mix really dry and take ages to knead properly?
2
Can I mix all-purpose flour with high-gluten flour to make bread flour?
0
Does bread flour (vs AP flour) make a big difference in the density of the dough?