I have been trying to figure out my highrise rental unit's oven timer functions for years. I don't have a model for it, but based on this post, it looks like an Admiral. Here are medium-range and close-up shots of the controls: 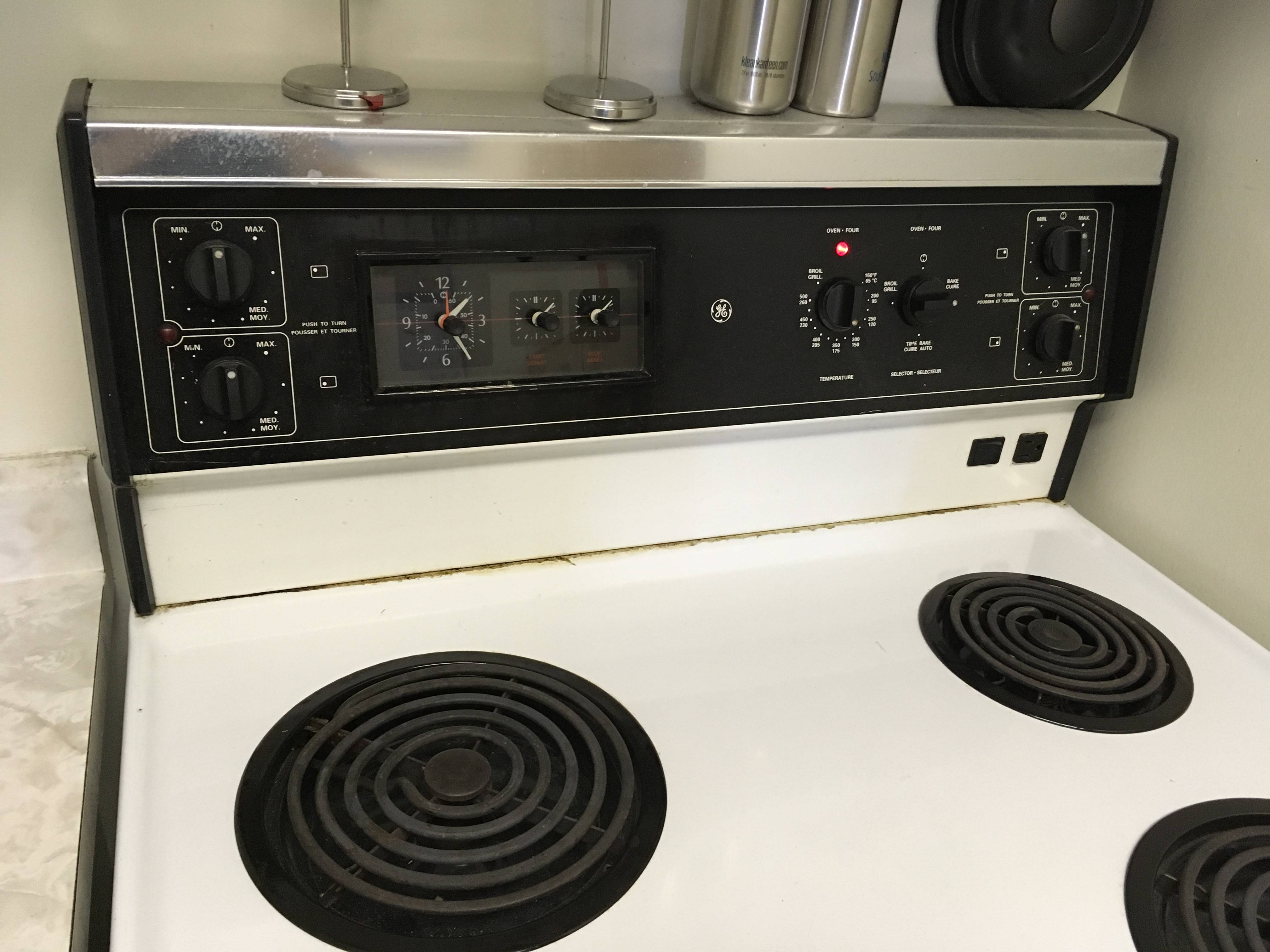 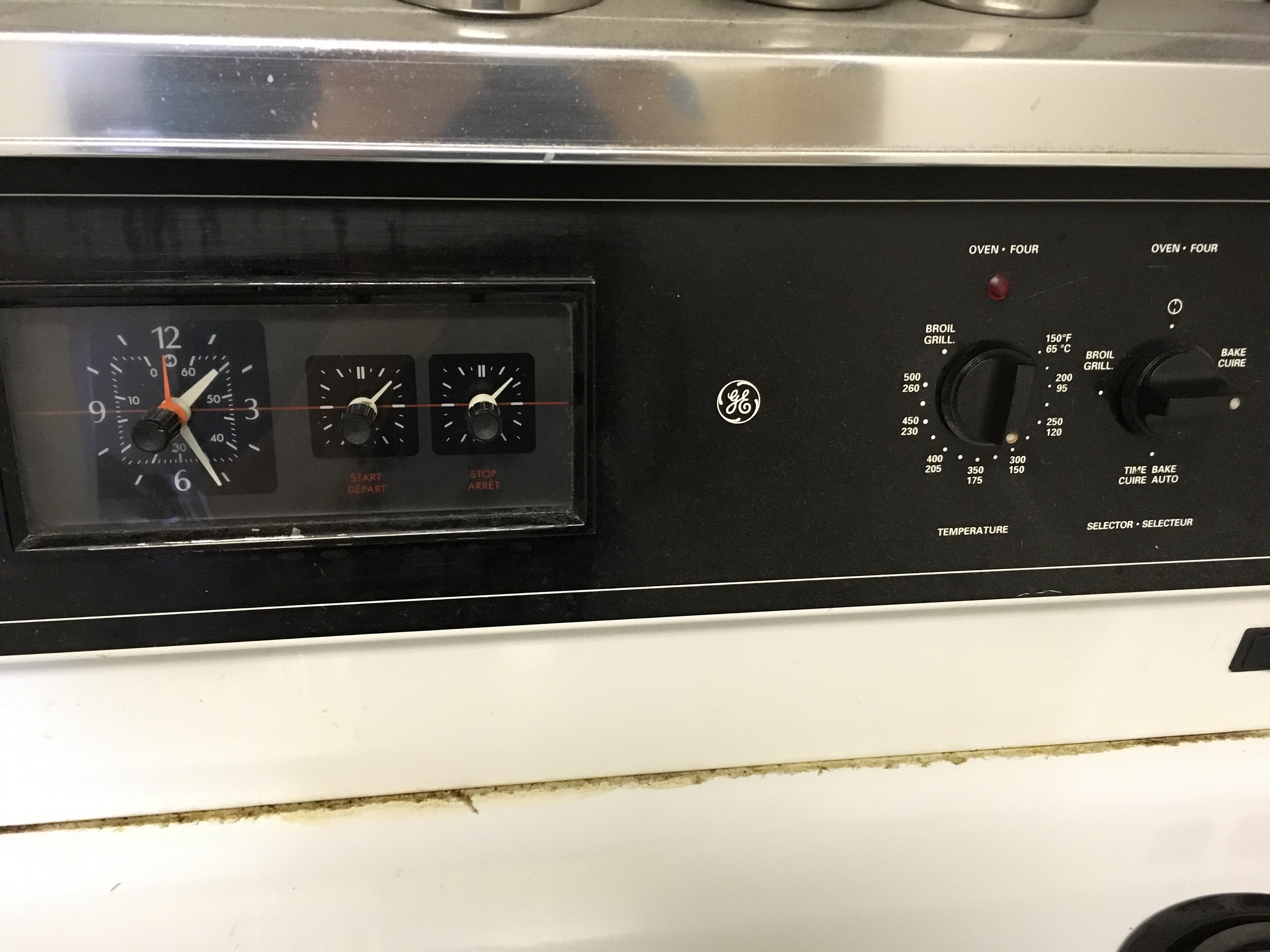 I was able to figure out how the countdown timer works (orange needle on the left most dial), but based on the lit LED above the Temperature dial, it doesn't actually turn the oven off once it starts to buzz, even though I have the "Selector" dial on "TIME BAKE" (right side dial). Neither does the LED turn off when I silence the buzzing by turning orange needle to the off position (presumably, the symbol just under the 12-o'clock symbol).

One set of instructions that seem to apply to my dials is a generic set of GE instructions (see ANNEX below). However, it doesn't really describe what one can expect of the countdown timer. It only describes how to specify the bake time using Start and Stop dials.

I don't actually see the heating elements glowing when the LED is on, but since I don't know much about ovens, it seems possible to me that they might still be turned on at a low level. I admit that this would be counterintuitive, as temperature seems to be regulated by cycling the hearing elements fully on and off rather than operating them at a some intermediate power level.

Along the vein of temperature control, I noticed the ANNEX mentions that it is not possible to time bake and temperature cook at the same time. However, I think I saw the LED cycle off and on within the duration between Start and Stop times. So I'm wondering if that limitation is very model specific.

Regarding the trustworthiness of the LED, I noticed that it hasn't turned off for a long time since the Stop time. Are those older ovens known for using the LED to indicate things other than the activation of the heating element? That would entirely change my speculations on the oven behaviour in response to countdown timer and Start/Stop knobs. (Subjectively, the oven does seem to have cooled down a bit in the time it took me to assemble this post, even though LED remained on for the whole time).

To set the automatic oven timer, use the two dials next to the clock, marked "Stop" and "Start". Each dial is marked off in 15 minute segments and numbered by the hour. The pointers on these dials can be moved only when the knob is pushed in. (There is a sound when the pointers are turned.)

Note: Before setting these dials, make sure that the range clock is set to the correct time of day.

To set the oven to come on at a later time:

To start the cooking process manually and have the oven turn off automatically:

On most models, the oven cycling light will come on immediately after setting up the time bake cycle. The bake indicator light stays on all the time.

Note: It is not possible to time bake and temperature cook at the same time.

Based on trial and error, I found the following

I will update this as I become more sure of the facts, based on further tests.

There are no markings on the back of the stove to confirm its brand or model. Wikipedia says that Whirlpool makes Admiral ovens and sells them exclusively at Home Depot. Whirlpool has not replied to my request for confirmation of the oven brand and an instruction manual. However, if I lift the chrome lid above the control panel, I seem some simple instructions, though not as detailed as my confirmatory observations:

2
Convert grill recipe to broiler and/or oven
17
Timing an oven to start while I am out - but what about preheating?
1
How do I use the clock on my Ilve oven?
3
How to deal with an inaccurate oven thermostat
3
Can the broiler replicate a regular gas oven?
3
How to determine whether oven thermometer is accurate?
1
Preheat and baking temperature
0
Is there any difference between US convection ovens to ovens used in other parts of the world
1
What does this function symbol on my Cylinda convection oven mean?
8
Knowing temperature in oven with no preheat indicator