How to slow down evaporation when cooking?

My question is, will the lid compensate for that water that evaporates faster (I assume?) when it is rolling boiling compared to when it just simmer?

The context is brewing tea. I have found a new tea that should be cooked for as long as possible (an hour is not too much) and I want to leave it unattended.

How to avoid too much evaporation?

With evaporating or boiling water, the evaporation of the water takes away an enormous amount of heat. It takes one small calorie (which is 1/1000th of a food calorie) to raise the temperature of one gram of water one degree C, but it then takes 575 calories to boil that water into vapor. In other words, if you add heat to almost-freezing water until it starts boiling, it will take almost six times as much heat energy again to completely boil the water away.

With your lid off, it becomes easier for the water to evaporate away, which extracts a large amount of heat energy from the water, keeping your example pot at a simmer. Put the lid on, and you make it harder for the vapor to escape, so less heat is removed, so your pot heats up further to a rolling boil.

But, since you're adding the same amount of heat to both pots, in both cases the pot will heat up until the heat lost per time equals the heat added. Although the majority of the heat loss in both cases will be the heat of vaporizing water, having a lid lets you have proportionally more heat loss through conduction to the surrounding air (which is why, with a glass lid, you'll see water condensing on the underside; that transfers heat to the lid, which then transfers heat to the air). So, you'll lose somewhat less water with a lid, but I'll guess there wouldn't be a large difference.

In your case, my guess is that you'll get more reliable boiling with a lid, especially a glass one where you can see the contents. And, the somewhat reduced water loss will be a bonus.

Covering (using a lid) will greatly reduce evaporation, whether at the full boil or just simmering...or sitting on the countertop.

You could look at reducing the heat coming from the burner/ring, so you could leave the lid on & also reduce the boil to a simmer.

One of these flat metal simmer rings that spread the heat [$£€ 2.50 on eBay] is a cheap & easy way to reduce the heat arriving at the pan from the burner. 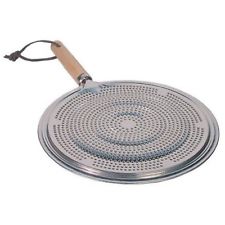 2
Oil-like stain when cooking with gas
1
Boil water first when cooking what foods?
1
How to boil away water from a sauce without it splashing?
6
Crystallization of sugar solution, and oddly crunchy candy with fudge-like texture after eating
12
How do I stop my pans from boiling over?
12
How can I easily get water to a desired temperature?
41
Tea water: heat to 80 °C or boil to 100 °C and let it cool down to 80 °C?
5
Samovar Tea: Let it brew the whole day?
1
Do I need to grind Ceylon Cinnamon sticks for coffee/tea, or can I add them whole?