How can I stop my pavlova from “leaking”?

I'm learning to make Pavlova. I'm five attempts in and generally pretty happy with my latest one except for the weird "leaking" that happens during baking. Anyone know why this happens and how to stop it? 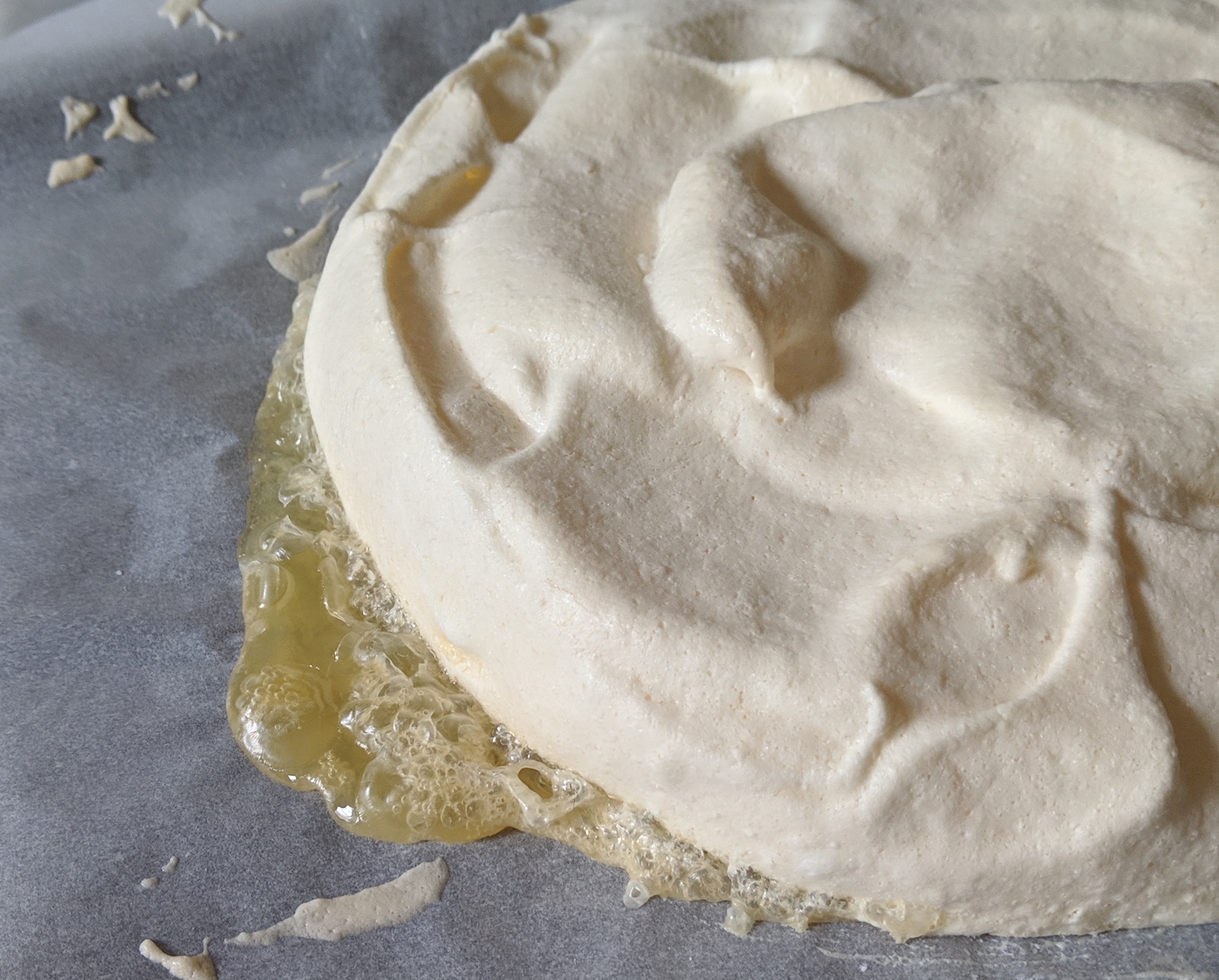 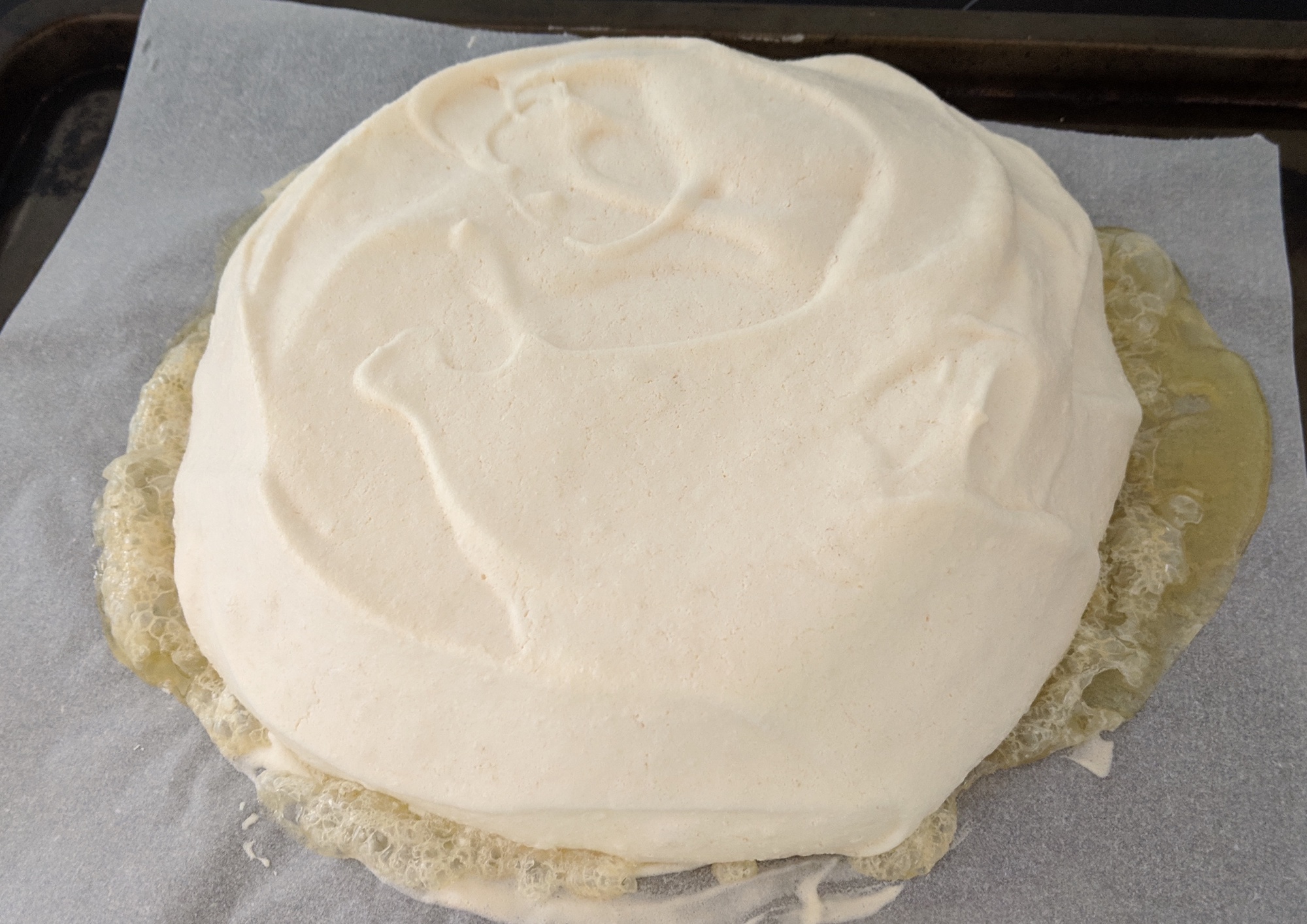 The most common reasons I know are:

A couple things I do see in your recipe: I am used to seeing a bit of vinegar. I assume the lemon is to cover the same with a bit fresher flavor, and it may but it might be worth trying such a recipe. I know the point it to help create the classic Pav crust while I am used to lemon in pavs being more to help the foam form buy your recipe calls for it after you already have peaks.

The 2nd thing I see is your recipe calls for a bit higher temp than I am used to. For instance the first I checked to refresh my memory called for 190F for 5 minutes, then drop to 130F for an hour, then turn off. I think what may friend from NZ who made much better than I do used was 200F for about 10 minutes, then just the light that kept the oven at about 140F for an hour. That is quite a bit lower than yours, so I would question possible over cooking as the issue.

I have even seen the higher pre-heat skipped and instead torch the meringue and only do the low heat to slow cook the center, but when I tried that I got the nice cruch, but raw egg inside and it also leaked, but it was a egg white leak. Yours visibly looks more of a sugary leak to my eyes.

one of the really important factors is getting the ratio of egg whites to sugar correct, which you have correctly done by weight, but placing them in a jug and checking the mils can also help. 225mls to 1½ cups (330G) of caster sugar works well. As said above a table spoon at a time and make sure all the sugar is dissolved. It's a bit like making toffee - if you don't dissolve the sugar it can crystallise and this is similar to the 'weeping'. Don't over beat. I run the balloon whisk on medium speed but just for 5 mins or so and this helps dissolve the sugar but doesn't get too much air in - which seems weird but you want to stiffen the mix not fill it full of bubbles (like you were doing a cream or cake). At the end mix 2 teaspoons of white vinegar with 1 tablespoon of cornflour and fold through or just whisk it for a few seconds. Using a pinch of creme of tartar at the beginning with the egg whites also assists with it as this reduces the beating required ...but make sure the sugar is dissolved, I think this is the problem. from Sam in Sydney making heaps of pavs for christmas :)

Not the answer you're looking for? Browse other questions tagged meringue or ask your own question.

4
What is the best way to making a great pavlova base?
8
My meringue forms syrup beads on top
5
How do I keep meringue from “weeping”?
5
What's this odd stuff coming out of my meringue?

4
What is the best way to making a great pavlova base?
1
Saving a pavlova that didn't form a crust
6
Using nuts in pavlova meringue
3
How long can I store a 'naked' Pavlova?
2
Does vinegar have the same function as tartaric acid in a pavlova?
2
Why does my pavlova always look like this?
2
What would the best Cornflour substitute be for a Pavlova?
4
Why is my meringue soft, moist and discoloured?
5
How to keep baked meringue from shrinking away from pie crust?
3
How to make a meringue cake layer that is not cracked?