I recently got a samovar tea kettle and am not sure about how to use it. For those of you confused about what I am talking about, this is my samovar (electric): 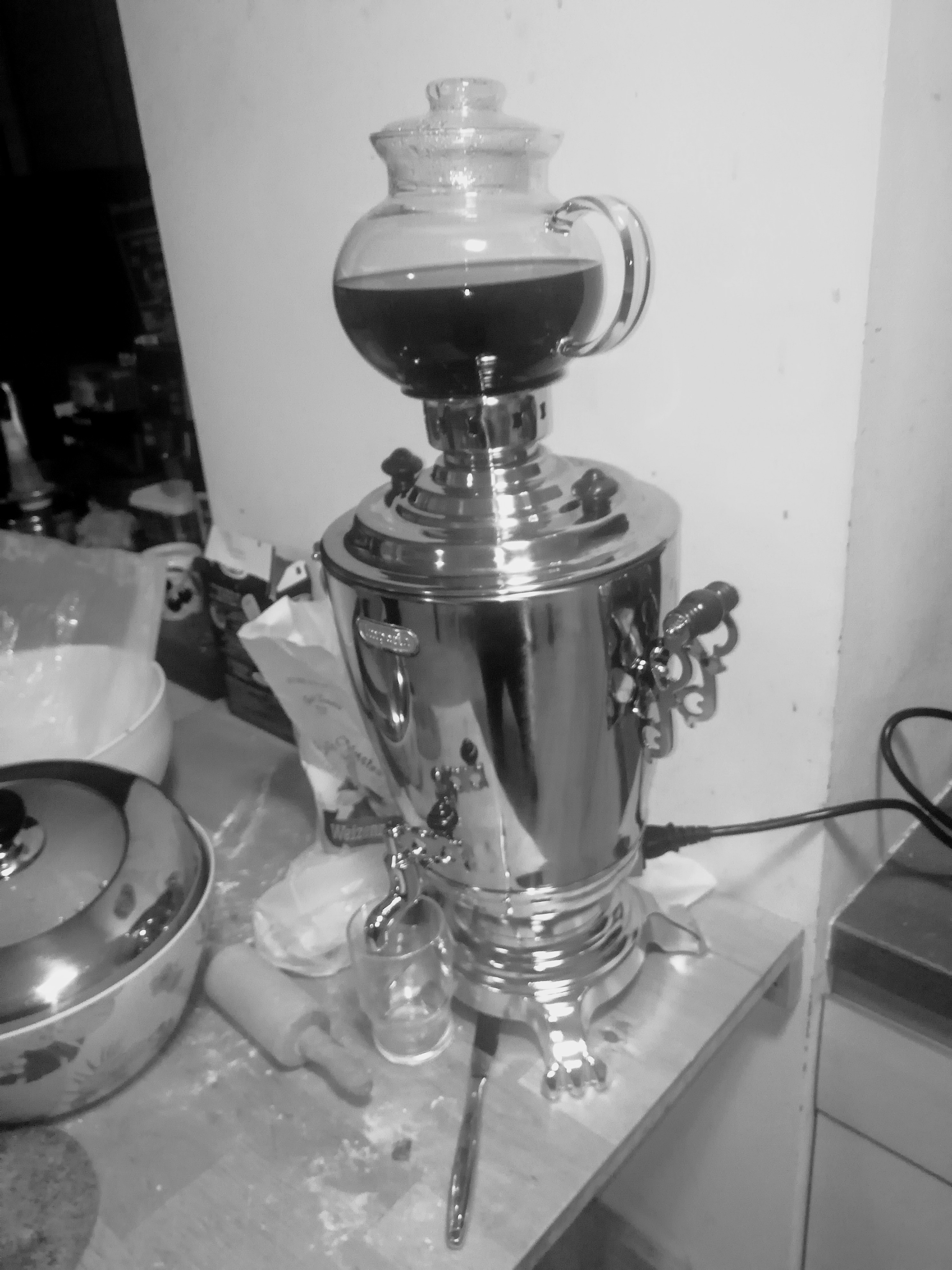 The metal part is a kettle for boiling water and keeping it warm. On top, there is an opening, on which you put your pot. You make very strong tea in the pot and keep it warm throughout the day by placing it on top of the samovar. When you want to drink a cup of tea you first pour in 1/10 to 1/3 tea from the pot and mix it with water from the samovar.

The point of the whole system is to have tea on demand all day for many people. By having only water in the metal part and strong concentrated tea in the pot every person can mix their own tea and make it as strong as they want to. In addition, you only need to clean the pot, the samovar is only used for water.

With this kind of kettle, you are supposed to brew the tea for a long time, and you need to choose a tea with low bitterness.

What I don't understand:

Isn't it a bad idea to have tea brew for so long? Am I even doing this right? Does the long-brewing provide any kind of benefit? Isn't it also a bad idea to continuously keep your tea warm throughout the day? I ended up removing the tea from the pot after several hours. It ended up so strong, that even when mixed 1:10 it was pretty much undrinkable for most people. But I guess I probably used too much tea, so this could have been avoided.

Also, would it be OK to put the tea in the samovar, or is the "svarka" (the tea concentrate) an integral part of the whole thing?

For reference, here is a samovar, without a pot on top: 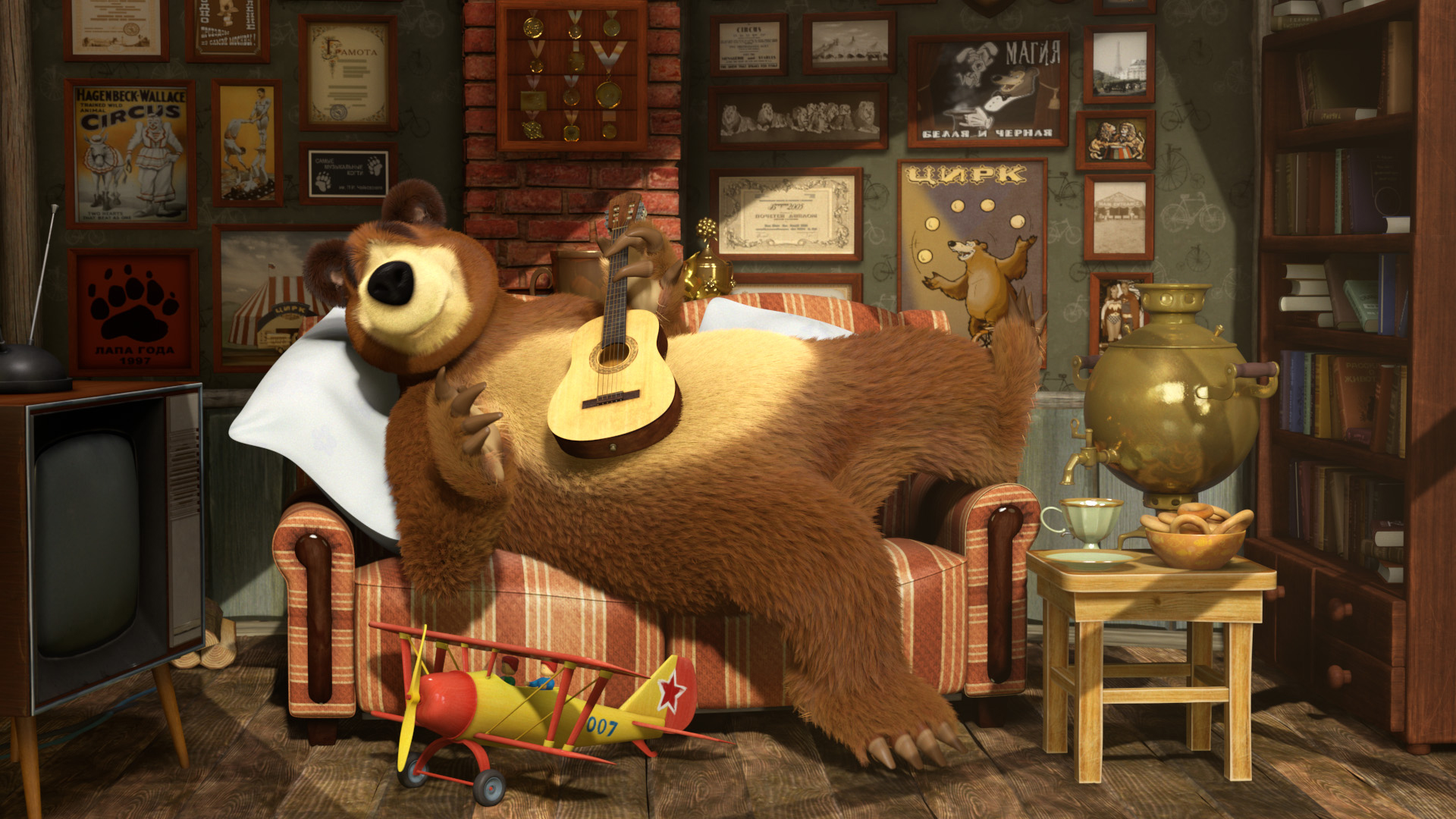 Presumably, in this case, the tea is in the samovar and there is no concentrate?

The problem with black tea is that after a few minutes of brewing, the leaves release very bitter substances. There are 2 general ways to deal with this:

The concentrated tea is an integral part of the system. You should not add any water to the svarka pot after initially brewing the tea or you give the bitter substances a chance to solve into the tea.

The tea brand is important, too. I'd propose to try an Earl Grey or another tea with a light taste. Ask a tea shop for advice, if you have one nearby.

The ratio of 1:10 sound about right. Most people have to get used to the idea that barely covering the bottom of the cup is enough.

Putting the diluted tea into the big kettle is a very bad idea and probably won't solve your problem. Every green and black tea will get more bitter over time, no matter how it was brewed. I think keeping the concentrate for a whole day is simply too long. 3 - 4 hours is the longest I would keep brewed black tea. You could make smaller portions to use up the concentrate in time.

Experiment with different brands and different amounts of tea, always keeping in mind that you're making a concentrate to keep the bitterness out of the tea. A splash of milk can neutralize a little of the bitterness, but the milk has to be very cold for it to work. If all else fails, brew peppermint tea instead ;)

There's a couple things I think are important, about this style of tea brewing - and which might help clear up some confusion.

First is, you mention the bitterness...the tea made this way generally is bitter, it is then treated to make it drinkable. This is often done with milk and sugar, chai (of India) also has spices added, and in Russia I've read it was often drunk with sugar or jam in the mouth to doctor the flavor at the source. The strong bitterness is part of the flavor, and part of the expectation, of tea brewed this way, and weaker (ie, non-bitter) tea flavor ends up feeling bland and overpowered by the equally strong flavors of the accompaniments when one expects strong tea. The fact that one can also use very small amounts to get a weaker (ish) overall experience is also helpful for those who do not prefer quite so strong a tea.

Or to think on it another way, coffee is also generally quite bitter... it is just expected and compensated for in coffee in a way that cultures which brew tea precisely don't expect to need to for tea.

As for the problems of long brewing, they are actually accounted for in this method. Keeping tea warm is, generally, not safe, but keeping it hot is much safer... basically it needs to be kept out of the danger zone. The other problem is that tea brewed or kept hot for long periods tends to be bitter, this is not usually a problem with this method because the decoction is already fully bitter. Oversteeping is usually not a problem after, for example, boiling the tea leaves for an extended period to extract every last bit of flavor :)

Also, you definitely can put tea in the samovar (this is done in india, for fully-prepared chai). The difficulty is, it will be much more difficult to doctor the tea or alter strength or flavors, so you need to be pretty sure the strength, and preparation, etc, are generally acceptable before you rely on this. It works very well with one person or a family (etc) holding tea made exactly to taste, or with tea conforming to broadly acceptable cultural standards - like a strong, sweetened milk tea, where one would not be expecting anything else and would take it or leave it.

On the other hand, since you are clearly not looking for the strong'n'bitter tea that would be expected out of this kind of style, may I recommend puer-eh teas? They are fermented, often sold in blocks or rounds, can be cheap and/or brew an awful lot of tea from a relatively small amount, and (more importantly) really do not get bitter easily. It's common to have a potful of leaves, and brew multiple pots (by adding and pouring off hot water) over the course of a day - hours of brewing time to extract all the flavor, and from a culture that prefers light, smooth, and undoctored teas. This means valuing a tea with tolerance for both long brewing times and lots of flavor, and good storage qualities as well.

Puer'eh is often said to brew sweet, which does not mean sugary but rather non-bitter, and so that would be a good descriptor to look for when looking into which ones to buy, along with (often) a described reddish brew color. You will also likely prefer the ripe, also called aged or fermented over the raw or fresh, which can be quite harsh in flavor. It also stores quite well since when sold as compressed bricks or rounds it is compact and sturdy (especially compared to dried leaves) - it just needs to be pried at before brewing for measuring and surface area.

I do not know much about samovars, but I remember that often Lapsang Souchong is used as this tea doesn’t get bitter even after long brewing times. See https://en.m.wikipedia.org/wiki/Lapsang_souchong?wprov=sfti1

It is common for even rather strongly brewed Lapsang Souchong tea to lack the bitterness common with other tea varieties.

Another traditional candidate is Russian Caravan, see for example https://tea-culture.net/zavarka-russian-tea/

Often times you will want to use a blend that will not go bitter after longer periods of brewing. Darker and more oxidized teas are better suited than green or white teas. Herbal and fruit teas are also a good option because they don’t contain any catechin compounds that make tea bitter. [...] The traditional tea of choice in Russia is Russian Caravan tea. [...] This heavily oxidized tea it is perfectly suited to make the strong Zavarka concentrate. It will result in a brew that is sweet and smoky with minimal bitterness

The rumor that samovar tea has to be bitter because of its strength is actually a fairytale.

Traditionally the tea leaves are placed in a sealable glass container, covered right to the top with cold water and placed in the fridge for 4-120 hours. I usually use a 5l jug with glass clip lid or bamboo screwon top.

It is important is that your container must have a bamboo top. Do not let steel or plastic come in contact with your tea. Store your tea leaves in an untreated sealable bamboo container or dark brown glass container.

My samovar is a ceramic one. Fill your tea concentrate into the pot and place it next to the hot samovar on a cork trivet.
Never warm up the concentrate. You can also place the pot with some of the concentrate (without leaves) on top of the samovar, but don’t let it get warmer than 50°C to prevent evaporation from the concentrate.

I usually use a 1/10 dilution. However, the tea brewed this way is about 7-10 times stronger than hot water brewed tea.
Try your ideal dilution and ensure kids cannot pour tea by themselves!!!
I've had guests who told me about the strong tea they drink. I gave them 1/15 and they still complaned about heart racing and a sleepless night.

The tea brewed this way has no bitterness at all. Only flowery, earthy, or spicey aromas depending on what tea variety you choose. As it has no bitterness people do not realize how strong it is and tend to drink much more as the unique flavour is very addictive.

When you say the tea was undrinakable for most people, I wonder how you are drinking it. Are you following this advice?

Tea was drunk in clear glass cups, sucked through a sugar cube held in the mouth.

5
Would freezing affect the flavour of mint tea?
13
Can I make tea with carbonated water?
4
How long should I let a tea with lemongrass steep?
4
A question on the level of water when making tea in an electic kettle?
2
Is it safe to use a tea kettle with black dots on the bottom?
1
How can I make my tea stronger?
3
Should a teabag or looseleaf tea brew at room to cold temperature water?
4
Is it possible to brew good tea on a mountain?
0
Method to brew a large batch of iced tea without steeping in a plastic container
4
Discoloration in tea kettle