What kind of cooking knife is this?

In a show (One Piece), the character uses the following kitchen knife. I've never seen anything like it before; what is it? 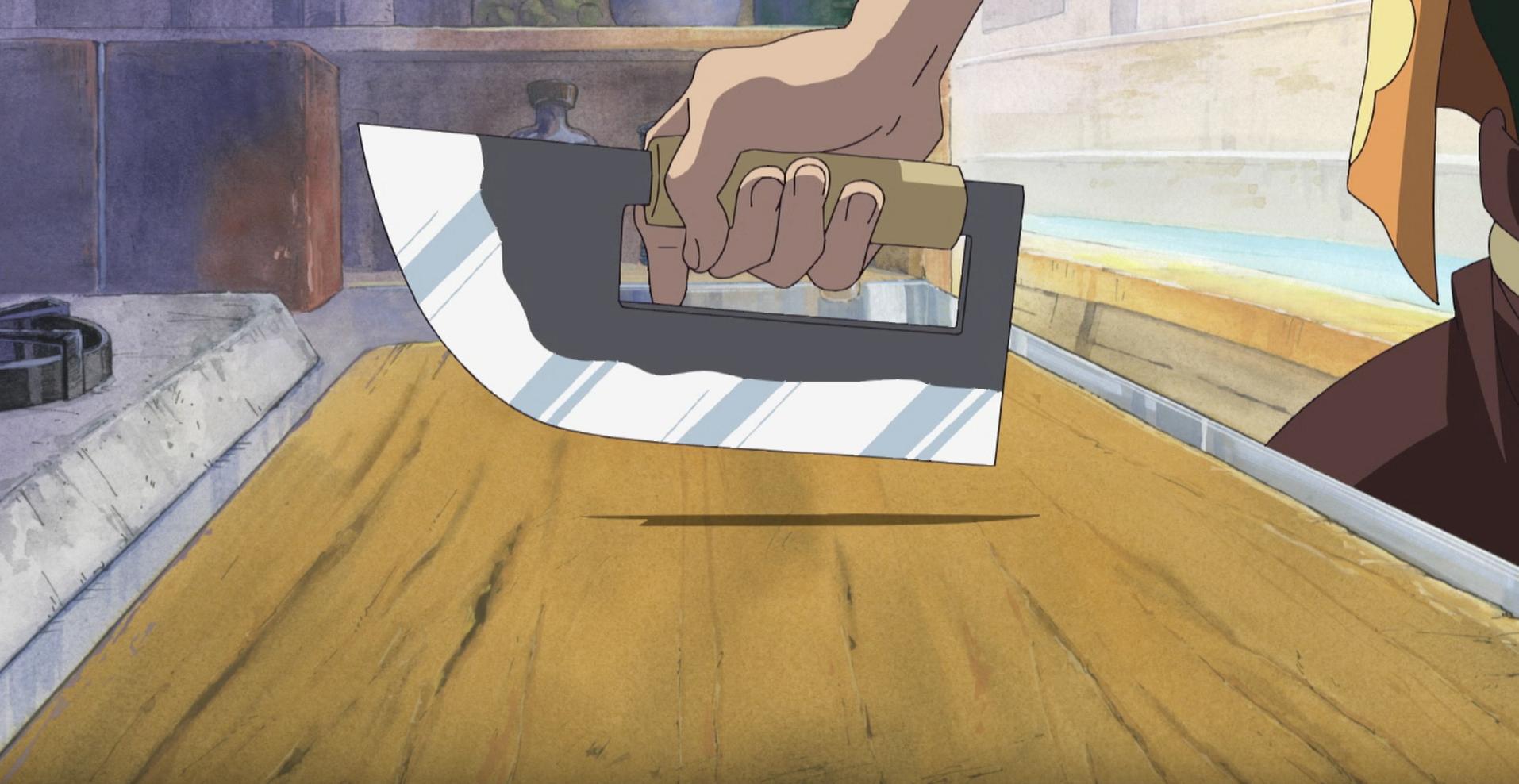 Here it is in action:

That looks like a variant on an ulu knife, a knife whose blade is below the handle. 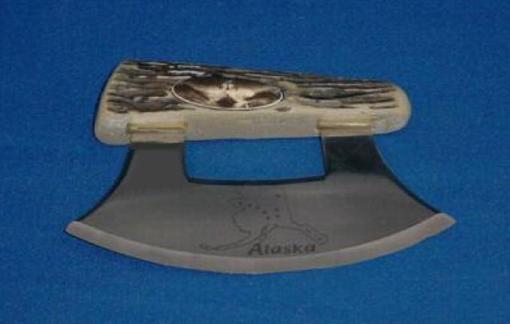 After seeing that GIF, I am 99% sure the animator thought up the design by themselves, probably to add some element of interest to the show, but without thinking about the practical side at all.

The animation shows the knife being used in a chopping motion, like a cleaver. But here is what a cleaver looks like

And this video can be used as a reference for proper use of a cleaver. We see slicing, chopping and rocking motions:

The knife in the anime is inferior to the cleaver shown above.

Considering these design problems, I hope nobody has had the idea of actually produce such a knife and use it in a real kitchen.

It looks a bit like a stylized menkiri knife, used for cutting udon noodles. Here is a picture: 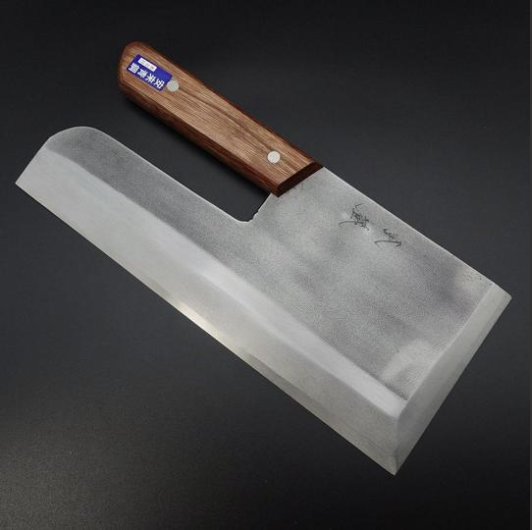 Jeffrey Thompson's blog has a picture of the knife in action. Thompson explains:

The menkiri bocho, also known as the udon kiri, is a knife for slicing handmade noodles – note the inset and the sharpened front edge. Simply squishing the blade down will not make proper noodles, so the very sharp knife is drawn across to ensure a clean cut.

A Google Images for "menkiri knife" brings up several photographs that look similar to the knife in the clip. None look exactly like that knife, though.

This is way too long for a comment, but not exactly an answer as I don't know the name for the knife.

Unlike what rumtscho has suggested, the general shape of the knife is well known. It's goes by a few names, but you can find pictures looking for a "Chinese pork knife" or "Chinese slaughter knife" on english language search engines. It's rather reminiscent of a "straight back" hunting/skinning knife, but deeper.

It's basically a meat cleaver with a front tip that's more like a skinning knife. Foodal describes the shape of the Dalstrong Ravager as:

The Ravager’s 9-inch blade is engineered with a pointed tip, designed to assist with skin removal and to access tight, deep spots that a square tip can’t.

Although the proportions are different, the combination of a long straight section and an upswept tip aren't all that different from some western butcher's knives, particularly the "scimitar" style ones. The asian knives depth would make them more "cleaver" than "knife" by western standards.

But none of those knives have the handle placement of the knife in the image. That would be more similar to a Japanese noodle knife (sobakiri, udonkiri, menkiri) in which the blade extends back under the handle, possibly even past the end of the handle. But those want a long cutting edge, and so aren't curved at the front.

And none of those connect back to the handle at the end. That would be more like an Inuit ulu, but those don't have the flattened section for slicing on a board. (although you can get them in a set with a board that's dished out) But it's often sold on hunting sites as a 'skinning' knife, which is a similar function to what the front of the pork knife is for.

And there's a now-deleted answer from Nova_Super that showed a picture of a knife being used to cut ice cream on an anti-griddle that has that connected handle, but doesn't have the rounded tip like a knife for skinning / butchering: 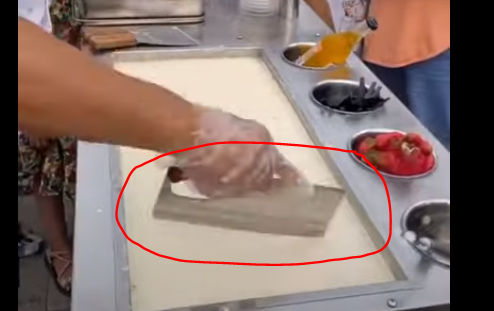 From my experience from trying to recreate costumes and props from animated shows for cosplay -- I suspect that although I can't find the exact same blade, that it is not an invention of the animator. Modern animators often get real people to dress up and perform actions that are filmed so they have reference material. The coloration and shape of the blade looks similar to the Chan Chi Kee butcher's knife and 'scraping' knives (dark on the flat / above the grind line, light on bevil), and it's possible that someone used a similar shape blade and modified it to move the handle ... but it's more likely that a prop buyer went looking for the most unusual knife they could find, and found what looks to be a blend of a pork knife and the ice cream knife.

19
What is the benefit of using a Mezzaluna Knife over a traditional knife
18
When is a Utility Knife to be preferred over a Chef's or a Paring knife?
12
Why would I prefer carbon steel (rust prone) kitchen knife?
8
Which knife is best for somone just learning to cook?
7
How to properly sharpen Santoku and any other knife using a water sharpener/Japanese whetstone?
14
What is this double-serrated knife good for?
2
Can I use the same kind of tools to sharpen my knives as I do my chisels?
19
What tasks require or work best with a knife point?
5
Does anyone know the name of the knife this ice cream seller is using?