When cooking Chicken Tandoori or Chicken Kababs, how do you make that crisp spicy layer thicker?

Here's a screenshot of what I'm talking about:

Look at this image. It's got a thick layer of spices on top of the chicken. Restaurants typically make such dishes with a thick, crispy, spicy layer that has a strong taste.

I'm trying to make this at home, but mine comes out with a very thin layer on the top. I tried making Chicken Tandoori using the standard recipe (marinate in yogurt for 4 hours and then roast). This is how it came out: 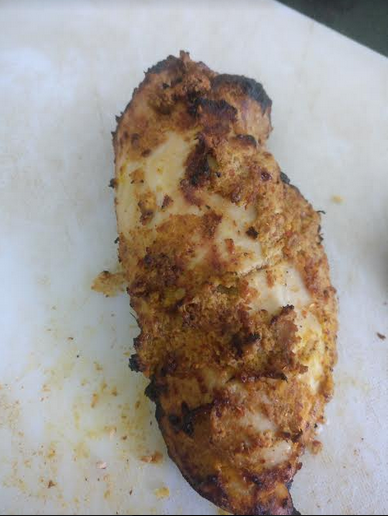 As you can see, the spicy, crispy layer at top is pretty thin with even bald patches. Does anyone know how can I make this layer thicker and more consistent?

Here is the recipe that I followed:

Restaurants usually make it on charcoal grill. I don't know the science but that does make a difference in achieving that look as well as taste. Use thicker yogurt with higher fat level, and keep the marinade thicker. I have been able to achieve that crusty layer by keeping my marinade thicker and using yogurt with at least 5% fat. Low fat yogurt usually results in thinner marinade.

For red color, you can use either red/deep orange food color or paprika. In south asian cuisine, we would often use something called 'Kashmiri red chilli powder' which is a mild chilli pepper but brings a gorgeous red color.

Edit: To add more from comments

The list of ingredients in the recipe you've linked is exactly what we usually use. There is no additional ingredient to that. Only the quality of ingredients and cooking technique will make difference in the results. I usually cook on a Gas mark 6. If you're washing the chicken and then using it straightaway, I find that it leaves the chicken too wet and it doesn't hold the marinade very well.

Also, if the chicken is a bit watery inside before marinating (like it becomes if left soaking in water for a while), it releases a lot of water during cooking which makes the marinade layer come off. I drain my chicken in a metal strainer for roughly 10-15 minutes before mixing in with the spices, regardless of frozen or not.

Similar happens with low-fat yogurt which is more liquidy and runny than high-fat yogurt. If you do have to use low fat yogurt, try straining it like the recipes asks for thick strained curd. By straining you're removing the liquid which will help the marinade to stick together well. Greek yogurt will also work. 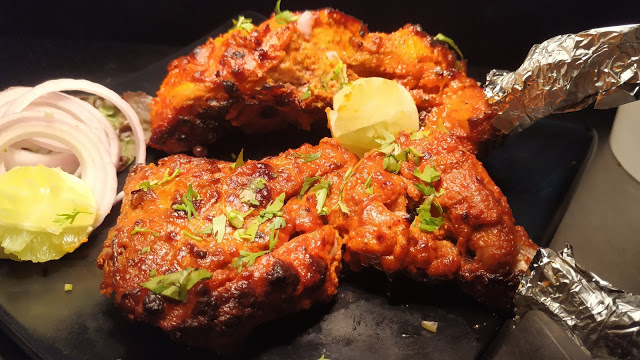 If you want to make a restaurant style Tandoori chicken with crisp spicy thicker layer then you have to use one more ingredient in your marination. That is called Kashmiri chilly paste. It will not only give the thick layer but that distinct red colour also. Also use a overnight hung yogurt. Kashmiri chilly powder won't give you that desired thick layer but can give some colour. You can pan roast it also, but won't get that crisp texture. Oven roast can give you almost 80% crisp layer but best one is on charcoal Ovalclay Tandoor. Try with Kashmiri chilly paste once , I am sure you won't get disappointed.

Not the answer you're looking for? Browse other questions tagged chicken marination or ask your own question.

28
How do you make General Tso's chicken as generally found in the Eastern USA?
2
Chicken fat solidifies on hot broth
1
Can you use baking powder in a breading?
1
What's the point of "draining" yogurt?
2
How to make "salt-crust-baked" chicken?
5
What is the liquid that forms after chicken goes through the freeze-thaw cycle, and how can I extract it more efficiently?
2
Applying a binder to chicken after wet marinating
4
Does anyone know what this dark red colored discharge is from this grilled chicken?
2
Crispy cold fried chicken
1
In what order should I put various "masalas" in chicken curry?

// TODO sg: TMP solution until we are confident in our current implementation of async imports // once we are, we can move the if into the js entry file and dynamically load the mark obsolete module