The more I season, the worse it gets with my cast iron [duplicate]

Recently, I bought a cast iron skillet, which was preseasoned. Still, I did season it a couple of times and since then I season it after every cook. I didn't cook anything crazy, just a dutch baby and a pizza.

Still, even after multiple seasonings, there is a clear hole in my seasoning in the middle of the pan: 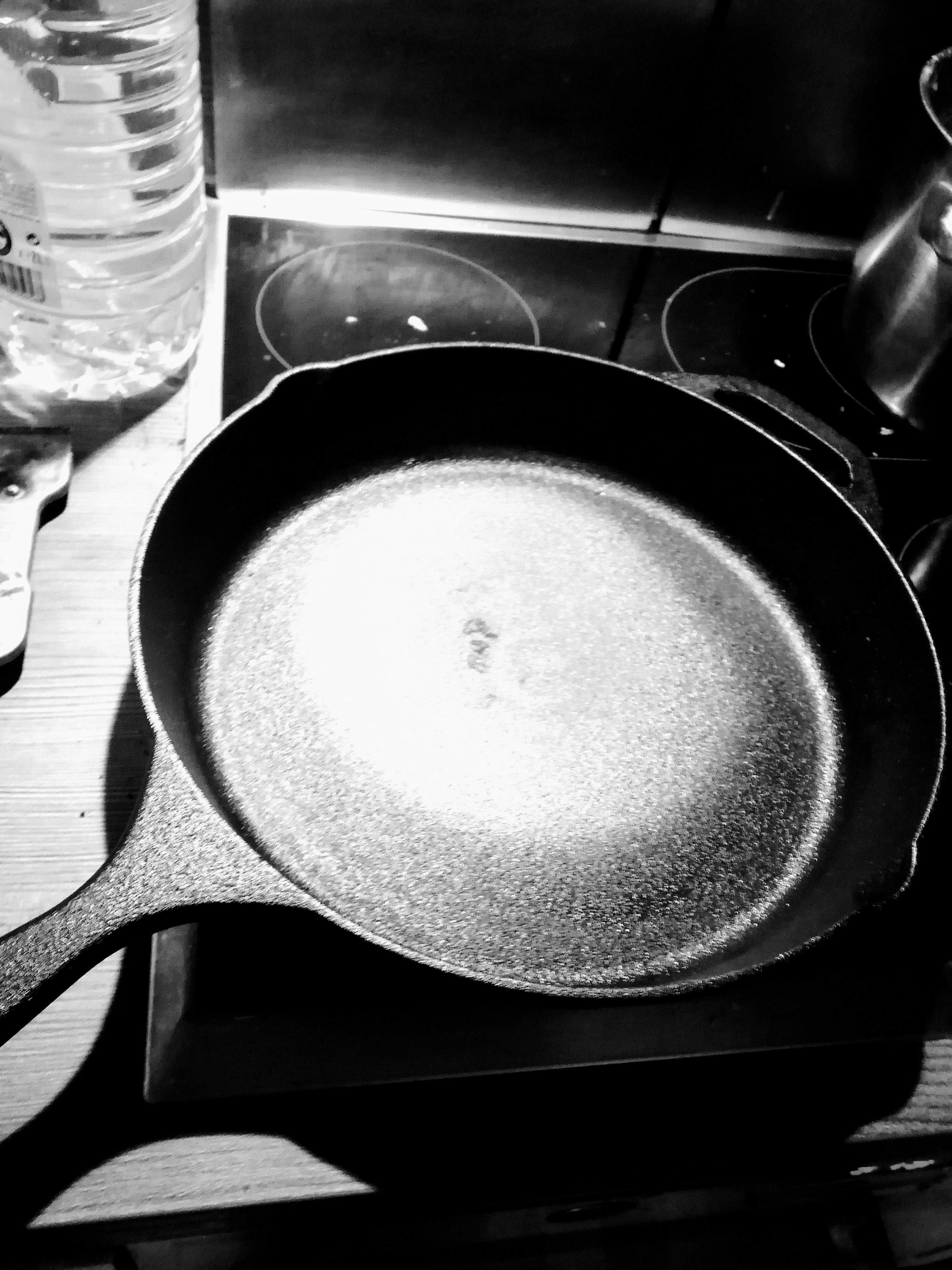 How I season it:

I put some oil in it, spread the oil with a paper towel, then heat it on the stove until it starts smoking, then let it cool.

I tried olive oil, which apparently is no good, so I switched to sunflower oil and now I am trying it with canola oil. I also switched from paper towel to regular towel, but still, the hole just seems to be getting bigger and bigger. When I touch it with my finger, I can see black residue on it.

What am I doing wrong here? Yesterday I even did a couple of seasonings one after another (let it cool, oil it, heat it, repeat), but this seems to have been counterproductive.

A couple of things - the first is that I often hear people say that you should strip off/remove the pre-seasoning that comes with skillets, as it is inferior or will interfere with a proper seasoning done by you. Since you are having issues with your current seasoning, and it's not getting better, it might be best to strip it away and start from scratch.

While one might think that soap and a scouring pad is an okay to remove seasoning, soap is going to leave a residue. Cook's Illustrated/America's Test Kitchen (the closest thing to an encyclopedia or the Burning Bush for all cooking-related matters) says that a great way to remove existing seasoning is to run your oven through it's self-cleaning cycle with the skillet in it.

If you do not have a self-cleaning oven, here is another article from Cook's Illustrated on how to do it with oven cleaner, soapy water, steel wool and vinegar -

Follow this method to completely remove any residual seasoning on a cast-iron pan before reseasoning it. Easy-Off Oven Cleaner is a caustic alkali, so be sure to work outdoors, wear rubber gloves, and avoid spraying near your face or skin. The skillet will rust instantly once you’ve discarded the vinegar-water solution and rinsed and dried the skillet in step 5, so be sure to immediately apply oil to the surface.

2A. Place skillet upside down on top of block. Wearing rubber gloves, spray skillet all over with Easy-Off Oven Cleaner, being careful to keep spray away from your face and exposed skin.

2B. Flip skillet over and spray inside.

2C. Pull plastic bag up and around skillet and tie to close. Leave wrapped, sprayed skillet outside (or in garage) for 24 hours.

3A. Wearing rubber gloves, remove plastic bag. Scrub skillet all over with steel wool and hot soapy water to remove all residue.

3B. Rinse, repeat scrubbing with steel wool, and rinse again.

Cook's Illustrated: How to strip a cast iron skillet

Once you have, basically, the unseasoned metal skillet, if you want state of the art seasoning, go and find food-grade flaxseed oil. Flaxseed oil is the base for linseed oil, which is used as a tough, durable furniture finish. Keep in mind, you MUST get food-grade oil, as furniture linseed oil has a lot of toxic chemicals added to it.

The flaxseed oil so effectively bonded to the skillets, forming a sheer, stick-resistant veneer, that even a run through our commercial dishwasher with a squirt of degreaser left them totally unscathed. But the vegetable oil-treated skillets showed rusty spots and patchiness when they emerged from the dishwasher, requiring reseasoning before use.

Why did the new treatment work so well? Flaxseed oil is the food-grade equivalent of linseed oil, used by artists to give their paintings a hard, polished finish, and it boasts six times the amount of omega-3 fatty acids as vegetable oil. Over prolonged exposure to high heat, these fatty acids combine to form a strong, solid matrix that polymerizes to the pan’s surface.

Once you have your food grade flaxseed oil, here are the steps:

How to Season Cast Iron with This Method Although lengthy, seasoning with flaxseed oil is a mainly hands-off undertaking. We highly recommend the treatment:

I'm going to assume that warming the skillet in the oven only set to 200 degrees, and then turning the oven off, and leaving it open while applying oil will have the oven cool enough to move to the next step. Also, saying to "repeat the process" does not include stripping off the existing seasoning each time. Just repeat the actual seasoning part.

This method was originally put out there by a blogger named Sheryl Canter. I don't think ATK added any twists of their own.

Cook's Illustrated how-to article, NOT behind their paywall

All of my quoted passages are from the Cook's Illustrated articles.

Oy. Let's not get into your past stuff, but simply discuss what effective seasoning should consist of.

If you keep detergent away from your pan, you may never have to repeat the process, and this seasoning could last you for decades. Maybe if you got too aggressive with the cleaning you might have to do it once in a great while. In no way should you have to do this over and over again. If it doesn't work, it's because you're not doing it right. For instance, the oil can only be properly absorbed in an already-hot pan, so if you oil first then heat all you're doing is burning the oil. Your black-residue center spot is probably just burnt oil.

No article for reference, but I learned this method in a chinese cooking class about 40 years ago, and all my pans are still healthy.

Cook some bacon with it.

What are you cooking with it could have some reason for the area to be expanding, so just try cooking some bacon. Some recipes for seasoning include putting it in an oven with bacon on it.

18
How do I fix improperly seasoned cast iron pans?

13
Cast iron pan has black residue on it
7
Maintenance and safety of cast iron skillet
2
Have I over- or under-cleaned my cast iron dutch oven?
5
How did rust appear on my cast iron in a matter of minutes?
6
Iron cast cookware: rust-ish or black coat even on new cookware, is it safe?
4
Is it possible to destroy the seasoning on cast-iron by getting the pan too hot?
4
Skillet rust (?) and next steps with regard to seasoning
3
Correct temperature and technique for frying in cast iron
2
Yellow color from brand new Pre-Seasoned Lodge Cast Iron griddle (before seasoning or even heating). Is this normal?