What is the lowest temperature at which botulism spores are killed?

I am wondering if it's possible to pressure can low-acid foods in my Instant Pot. Now hear me out. I know it's not recommended because the highest pressure that can be guaranteed on it is 10.2 PSI, and many low-acid foods require 15 PSI for a certain amount of time to reach the proper temperature (240-250 degrees fahrenheit, I believe). However, I have also read that killing spores is a function of temperature and time. So my question is, does anyone know if a lower temperature (possibly attainable by my Instant Pot) for a longer period of time would do? Does anyone know of a table that lists various times and temperatures a food must be held at to kill botulism spores (not bacteria)?

Additional information: I live at 4564 feet above sea level. I am most interested in canning chicken and beans. Here are the links I have found helpful in my search thus far.

In all good conscience, the only recommendations I could follow would be USDA or an equally authoritative source, and they only recommend pressure canning at a minimum of 240F. At 4000-6000 feet, that requires 13 lbs pressure for dial or 15 for weighted (as the weights are normally only 10 or 15 lbs). They make no allowances for increasing time as you can for most cooking as they will not accept killing below that temperature. Are they being overly cautious? Possibly, but they are the ones which for years have done the scientific tests.

Now, I cannot find the articles, but I do recall that a couple years ago the USDA ordered a recall of a pressure canner built similar to an instant pot. That canner was only rated to 2500 feet, and had a misleading label stating it was USDA compliant or some similar wording. It was order recalled because the USDA statements were to the effect that it had never been approved, or even submitted for testing, and further, if it had been it would have failed. That the USDA would not approve that low of a power supply as being able to maintain a consistent pressure and temperature to match what a heavy pressure canner on a stove burner can do, nor did it have a high enough heat reserve to meet those requirements.

I own both a pressure canner and an instant pot, not not for a minute would I personally think the instant pot could do the job I am afraid, and I also would not want to put that much strain on its heating element. And frankly, except for the space it takes up, my pressure canner was cheaper so would not risk the more expensive tool that is not up to the job.

The resources for this topic are terrible. The best I have come up with is reasoning from first principles. That reasoning suggests the probable temperature at which spores are destroyed is somewhere between 113.3C and 116.4C, but without a proper microbiology experiment it's hard to say with much certainty whether that's correct.

None of the resources on this topic that I have reviewed provide a credible answer to the question of what exposure time, temperature, and pH is required to destroy C. botulinum. At best they provide confusing and ambiguous statements none of which seem to be substantiated by experimental evidence.

I have not performed an exhaustive review of academic journals for this topic. Hopefully, an experiment from a specialist on this topic will surface, but given the dearth of references to such materials I encountered, I'm not optimistic.

Conflation of Process versus Spore Time and Temperature

All of the resources I have reviewed on this topic are imprecise in a critical way: The stated process times and temperatures required to destroy the spores are not distinguished from the time the spore itself must be held at temperature to destroy it. For example, the USDA's "Home Canning Guide 1 - Principles" states the following:

At temperatures of 240° to 250°F, the time needed to destroy bacteria in low-acid canned food ranges from 20 to 100 minutes. The exact time depends on the kind of food being canned, the way it is packed into jars, and the size of jars.

The only interpretation of this statement that makes sense to me is that the phrase "At temperatures of 240° to 250°F" here refers the temperature the spores must eventually reach while the "time needed to destroy bacteria" refers to process time. That is it might take exposing a can to that temperature "20 to 100 minutes" such that all of its contents reach a high enough temperature for long enough to destroy the spores. In other words, the critical targets for spore and process are ambiguously discussed within a single sentence. This conflation is characteristic of all documents on this topic that I have reviewed.

It's difficult for me to understand how the authors and editors of these publications decided that introducing this kind confusion into a topic of such import is helpful.

I am further skeptical of the veracity of the resources I have reviewed published on this topic because none of them include references to any scientific literature measuring the relationship between exposure time, temperature, pH, and survival rates of C. botulinum spores. I have searched for the same and come up empty handed. It seems that all of the recommendations I have found for destroying C. botulinum are not based on scientific evidence.

Absent the results of some sort of a microbiology experiment performed by a competent empiricist, the best I can hope for is to infer what temperatures spores must have customarily reached in successful home canning environments over the past decades. To make this inference, I'm relying on the well-established thermodynamic principles forming the basis of the pressure canning process, and some assumptions about what must have been happening in those millions of cans of food that must have been successfully preserved without causing botulism.

Pressure canning is a thermodynamic system where the cans are immersed in a heat reservoir by way of establishing a water/steam vapor-liquid equilibrium at a particular stable temperature. The temperature of any point on the inside of the can is described by Newton's law of heating and cooling:

where t is time since the the water/steam reached

, T is the temperature of the point,

is the temperature of the water/steam in equilibrium, and τ is the time constant that is characteristic of that particular point.

I have measured the time constant for my own bolognese sauce on my stovetop in a one-liter jar in steam/water equilibrium at one atmosphere with the following results: 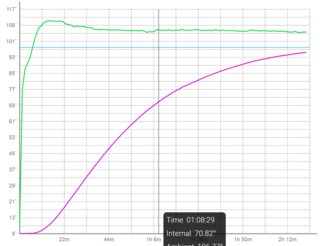 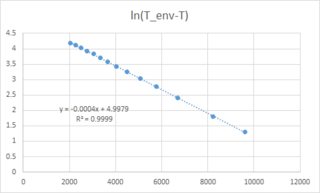 Note that R² has four nines which, I think, qualifies this as another example of Wigner's observation. For this particular jar of bolognese τ is 41 minutes.

Where I live the most common manufacturer of pressure canners I encounter is National Presto Industries. I have heard many accounts from at least two generations my senior of regularly canning meat, seafood, fruits, and vegetables using Presto pressure cookers. In my region of Canada, at least, it seems like it is customary to simply strictly follow the Presto instructions for the food product when canning. None of the canners I have spoken with mentioned food-borne illnesses where they suspected the cause was canning. I take this to mean that whatever the process that has been prescribed by Presto is sufficient to destroy C. botulinum spores.

The former prescribes the following for all meats:

The latter prescribes the following for Spaghetti Sauce:

While I have not come across any data measuring the prevalence of meat canning using Presto pressure canners, I have encountered some examples of that myself. With respect to prevalence of botulism in this region, Health Canada states the following:

While outbreaks of food-borne illnesses in Canada are relatively common, botulism outbreaks are quite rare. In recent years, about two cases per year have been reported in Canada.

This is not at all a conclusion that I would consider to be beyond reproach. But at least what underlies this conclusion is reasoning from first principles which seems to be an epistemic improvement over the other resources on this topic that I have found. You'll have to decide for yourself whether this line of reasoning is good enough to rely on for your health.

According to the National Center for Home Food Preservation, low-acid foods should be sterilized at temperatures of 240° to 250°F, attainable with pressure canners, operated at 10 to 15 pounds per square inch, as measured by a gauge, to destroy botulinum spores. At temperatures of 240° to 250°F, the time needed to destroy bacteria in low-acid canned food ranges from 20 to 100 minutes. The amount of time depends on the type of food, the size of the jars, and how it is packed into them. I don't have an instant pot, but I would want to be pretty certain of the exact temperature and the exact pressure if I were going to pursue pressure canning. You might find the link above helpful.

As far as I can tell, you can't do pressure canning in the instant pot. There is a product called the Instant Pot Max that comes with a home canning setting. However, both the manufacturer and the USDA have cause for concern. You can read this for more information. Basically, further testing needs to be done for them to be comfortable that it will eliminate botulinum spores.

Not the answer you're looking for? Browse other questions tagged food-safety food-preservation canning botulism instant-pot or ask your own question.

4
What are the costs to consider when making jam?
11
Will botulism growing in my home-canned vegetables pop the lid?
9
What is the sous vide botulism risk if storing meat post-cooking at home?
14
Are the claims legitimate linking botulism to vacuum prepared foods?
10
How long does it take botulism spores to germinate in the fridge?
7
Which foods are certain to never cause food poisoning?
7
What are the guidelines for creating a canning recipe?
2
What counts as "anaerobic" re: botulism?
1
Avoiding foodborne botulism
0
Botulism risk from anchovies in the refrigerator?