How To Get the Popcorn effect on Pigskin Cooked on a Roast?

I have been researching cooking skin-on pork roasts (for example Porchetta).

And what I have noticed is that the main difference between them is the skin texture. It does not matter if it is high or lower temperatures, cooking for 10 hours or 3. Some recipes I am looking at come out looking just like darkened skin, while others come out like light flaky popcorn.

So how do you cook a skin-on pork roast to produce this pork rind/popcorn effect? (If at all possible only using an oven.) 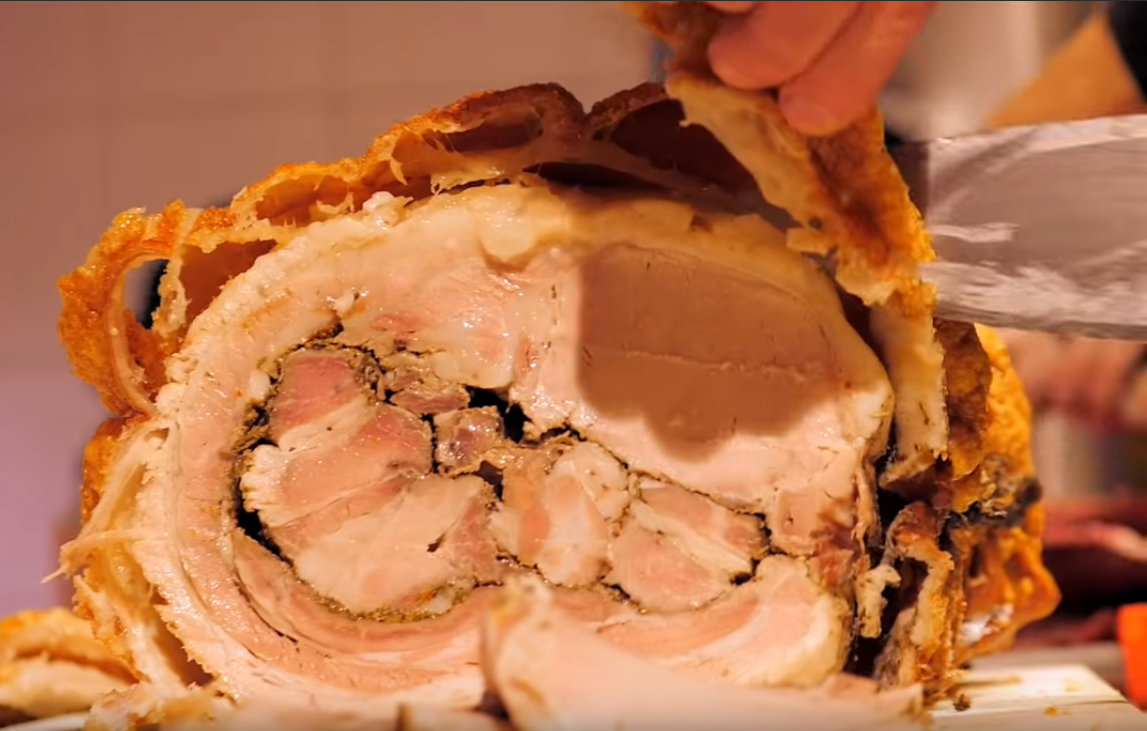 It is certainly possible using the oven only.

For a good crackling you need to have several components - a good layer of fat under the skin, a nice dry skin surface before preparing, sufficient edges on the skin to help crisp the skin, and some salt and oil. There is a lot of debate around how to prepare the skin and the different methods for getting these things to work. Personally I prepare my roast by scoring into ~cm^2 grid, rub with plenty of salt and oil, then roast. This has worked well for me, but there are a number of other methods, including pouring boiling water over the skin before roasting that are advocated by top chefs from around the world.

The difference between the two types of crackling is down to how the roast has been prepared in the final stages. A darker roast crackling with little bubbling is due to roasting alone. This will cause the skin to harden and darken, creating a hard crisp skin with some bubbling, but not to the extent that a "popcorn" crackling shows. "Popcorn" crackling starts in the same manner and is finished by heating the crackling to a high temperature so that the fat under the skin boils and causes the skin to puff.

Basically all you have to do is prepare the skin as you would normally do for a roast of pork that you want to crackle. Roast the pork as you would normally so that the skin is crisp. From this point you have two options - either remove the roasted skin and "popcorn" it separately (works well for shoulder roasts, where it is difficult to spread the heat evenly) or "popcorn" in place. For both, turn off the bake function on the oven and turn on the grill/broiler. When the element is hot, place the roast/skin under the broiler/grill and let the heat do its work, rotating the skin/roast as necessary. This should only take a few minutes, and you need to be careful that it doesn't burn the bits which are close to the elements.

1
How to get a juicy and colored, crispy roast chicken at the same time?

12
How long should roast pork be cooked so that it stays light pink?
9
How to cook a pork sirloin roast?
4
How to roast pork shoulder?
0
How long is the cooking time for pork roast?
2
How do I adjust cooking time when temperature may be off by 5-10C?
2
How much longer do I cook the roast?
3
How can I remove salt from a saline infused pork sirloin roast?
3
How should cooked pork shoulder be stored in the freezer?
5
How to cook roast pork with a crackling wrap