Where can I find recipes with photos of the exact meal created from the list of ingredients? [closed]

Want to improve this question? Update the question so it's on-topic for Seasoned Advice.

I'm creating a service for changing people nutrition habits and convincing them to eat more healthy. As a first step I would like to develop an app to recognize what's on the plate.

I'm aware about apps which can recognize if a hot-dog on my plate is a hot-dog or a salad - however it's not exactly what I want to or need to achieve. For starters I need a website or a digital book where I can find:

I'm cooking it in a pot where I can fit 4 servings, then I divide it to 4 plates, so the photo which would work in this case would be:

allrecipes.com has list of ingredients together with their weights, however photos not always reflect the size/weight of the created meal. To make my app working I need a reliable resource where I could get many of such recipes without checking if each of them has a good photo or not.

I'm asking here, as I cook only basic stuff and I use only 1-2 websites where unfortunately there is no such information. Maybe by any chance you use/saw/create a website where I can find the information which I need.

This should illustrate some of the issues we point out in the comments.

Here's a pizza on a plate. It fills the plate, a reasonable portion by the look of things. 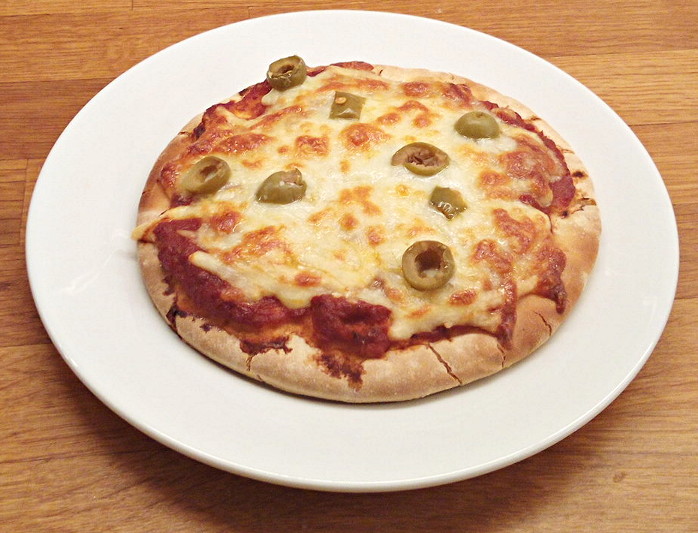 Actually no. That's a mini pizza on a side plate. Here's the same pizza on a dinner plate. 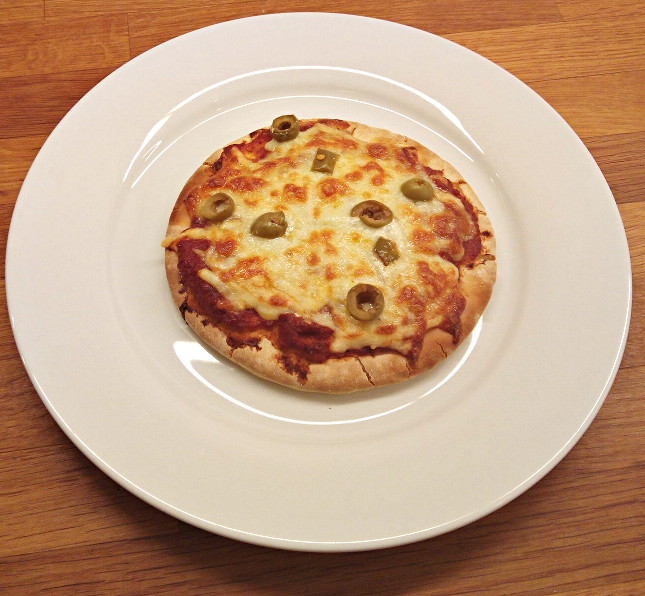 Not quite so generous now. How would you take that into account?

The cheese was mozarella and cheddar, but the cheddar was reduced fat. I did that because they'd sold out of ready-grated full-fat, but someone on a diet (presumably your target market) could be expected to make that substitution and expect your app to deal with it -- after all what proportion of the calories comes from the dough, and what proportion from the cheese? Of course I didn't weigh the cheese, or measure it by volume (or the sauce for that matter, but that's home made with hardly any calories in).

I happen to be sitting next to a pile of cookery books. Some do have pictures of the entire dish, to serve n people -- for a few recipes, but with nothing to give an idea of scale. Some have pictures of individual servings, usually with an unspecified side dish which would account for most of the calories. Photos are often artfully shot so you couldn't extract a size from them; a few are shot from directly above so you don;t know the depth. My pizza above was shot to try and show its size - but it's not a very appealing photo (to be fair those bases are nowhere near as good as home made and I won't be buying them again).

Veering off topic: I've played around with myfitnesspal in the past. That's the sort of thing you're up against. For packaged foods (and restaurants that list nutrition information) it works quite well - but you or your users would need to recreate their database. For recipes it works quite well - by entering the ingredients as numbers and dividing them up, or entering the nutrition information from a recipe book. Actually you can get a good feel for what your home-cooking is going to come out like in terms of calories, so after a little while you don't need to keep entering dishes but can use something similar.

Properly off-topic: These are issues that have plagued machine-vision systems designers for years. AI isn't a magic bullet to deal with that. It's easily fooled. Even if we could provide a training dataset that wouldn't help with your end-users' dishes.

Not the answer you're looking for? Browse other questions tagged nutrient-composition or ask your own question.

6
Does vinegar increase the iron we can digest from Spinach?