Can I make popcorn with any corn?

Up until today I only knew about one type of corn for popcorn. Searching for Peruvian food I found out that in Peru there are different "popcorn" varieties.

So that made me think: is it possible to make popcorn with just any variety of corn? If not, what properties do these corn varieties have that allow then to be popped and not any others?

The answer it seems is - no, you can't just use any variety of corn. It seems that you need in particular a hard shell around the kernel that is not present in sweetcorn varieties.

I also suspect that it is harder to make than one might imagine, you need a specific percentage of water in the kernel to get it to pop - this is why you can't store unpopped popcorn in the open and once opened needs to be used within a few months, as the water will evaporate and eventually the percentage will become too low to effectively pop.

It's a children's book, but The Popcorn Book by Tomie de Paola is actually a very comprehensive summary on the history and science of popcorn.

Popcorn pops because the kernels contain small amounts of moisture which, when heated, cook the starches inside the popcorn, causing them to rapidly expand and exploding out the kernel. (This is my basic understanding; I'm sure food scientist will have a more comprehensive explanation).

What this means is that popcorn has to have a few specific features:

I imagine all varieties of "sweet corn", the type used for corn on the cob, would probably not work very well. I don't think it would dry very well, and I think the shell would be weak (a feature when marketing it as something for humans to consume)

Dent corn, the variety used for animal feed, would also probably not work very well. It is a tough kernel and I don't think it would have enough moisture to explode.

I very well could be wrong about this, but I doubt that popping these other types (and I'm sure there are many more) would make for good popcorn.

Interestingly, there are other grains which also pop very well, including sorghum and amaranth.

No, you need popping corn. Popcorn works because

When you cook the corn, the water turns to steam, and the husk stops the steam escaping until the pressure builds up enough to make the kernel explode and the starch turn to a solid foam.

The other kinds of corn (dent, flint, flour, pod and sweet corns) don't have the right combinations of starch, husk and moisture to pop properly. For example, sweet corn has a soft husk and is picked while it still contains a relatively large amount of sugar that hasn't been converted to starch. Dent and flour corns have lots of starch but it's the wrong kind.

My grandparents were Western Nebraska farmers who grew corn (and other things.) Most was "field corn" which is suitable only for livestock feed. Some was sweet corn, which is for humans. Grandma used to make what she called "parched corn." Sweet corn was dried out by pulling the husks back and hanging the ears down by tacking the husks to the side of the shed. When the kernels were shriveled, she shelled them (that is, pulled them off the cob) and treated them like popcorn.

She popped pop corn by heating oil in cast iron skillet and stirring. So she did the same thing to the dried sweet corn. It didn't pop, per se, but the kernels became spherical and crunchy. With a little salt, it was a great snack.

So, while you can't pop any kind of corn, you can still try, and what you get is still a treat. I've always meant to try to reproduce this, but I've never gotten around to trying. So YMMV.

In Bolivia we have this kind of giant popcorn, called "Pasankalla": 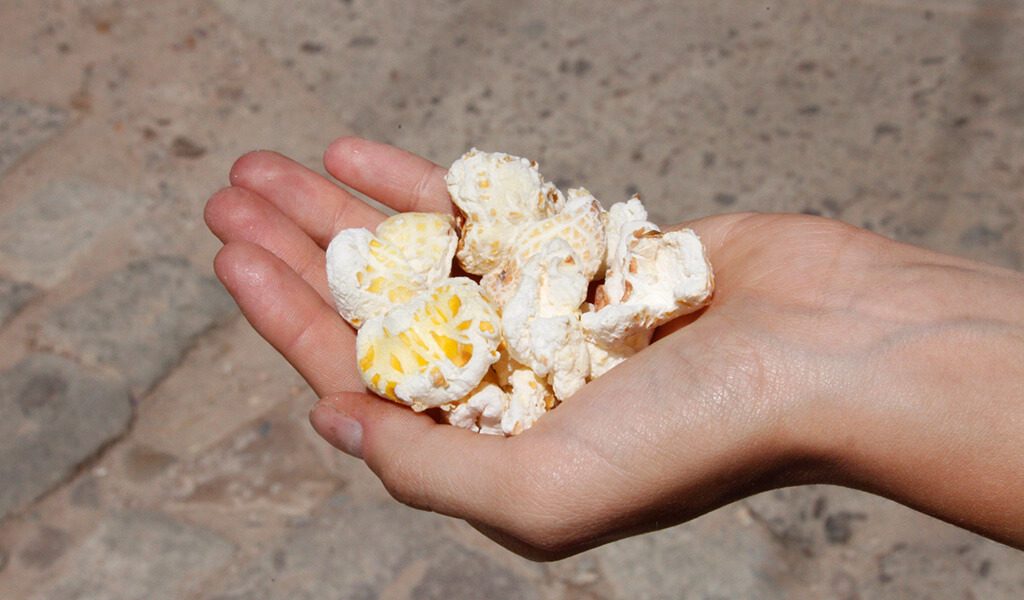 Not the answer you're looking for? Browse other questions tagged ingredient-selection corn popcorn or ask your own question.

12
Cooking dried corn
3
Where can I buy corn kernel for making popcorn?

0
Would ground "popcorn meal" differ from regular corn meal?
3
Where can I buy corn kernel for making popcorn?
7
How to minimize the impact of unpopped kernels and kernel shards in popcorn?
2
How do you make popcorn with "indian corn"
12
Does the airflow pattern in a hot air popcorn popper matter? / What should I look for in a popper?
4
Can "cream-style" corn substitute for creamed corn in cornbread?
3
Did I poison myself by eating popcorn made in a steel pot with olive oil?
8
Can I make ciabatta with corn flour?
0
How to make perfect crunchy popcorn?