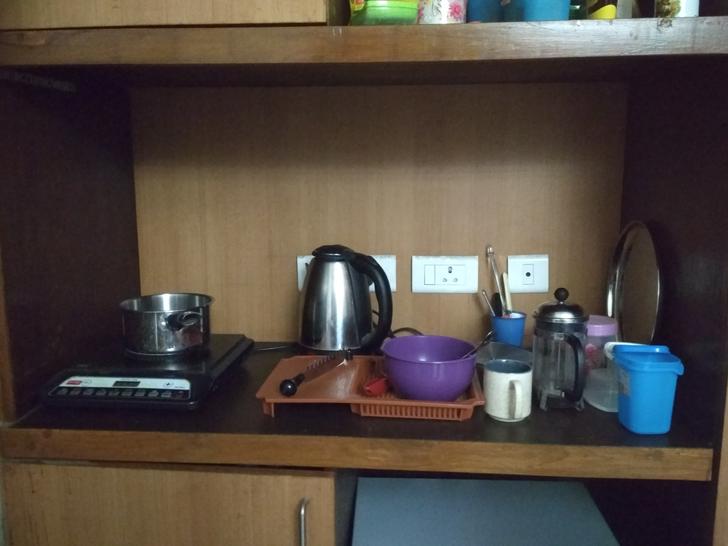 Please take a look at the space. Although the clutter is annoying, but I intend to attract your attention to the closed like wooden space. I plan to make rice, sauted vegetables, grilled chicken on a regular basis and boiling water for eggs, coffee and the like. I don't intend to make any gravy/sauce based dishes. I am worried that cooking for the next 3-4 years there could damage the wood.

If I were to cover the wood with aluminum foil, would it take care of the issue and is it safe to do that?

Edit: I plan to use an electric induction stove.

The steam released by cooking the foods you mentioned, and boiling water outright, would probably damage the wood. Foil might prevent that, if you seal it completely (using some sort of moisture/heat resistant tape). However, that wouldn't eliminate the fire hazard from cooking in an enclosed wooden box--nothing short of adding a layer of fire-retardant insulation would.

Your best bet is to cook on the floor in the middle of your room (open a window if it gets steamy) and then store your cleaned and cooled implements in the wooden enclosure, provided that your floor is not carpeted. If it is, then I would recommend finding someplace else to cook that isn't a tinderbox.

Dorms also usually have cleaners who come in to vacuum/mop the floors regularly, and they'll report something like that to the uni authorities. That'll result in an immediate warning, and being kicked out of the dorm if you don't sort it straight away.

If you don't have a cleaner, and won't get found out immediately... When I was at uni, they had compulsory inspections of every dorm room every term. If they thought it wasn't tidy or clean enough, you had to sort it, or pay for professional cleaning if it was beyond what would normally be expected. If you'd caused any damage, you had to pay for repairs.

So you can reasonably expect your first room inspection to land you in very serious trouble. Sauteeing produces grease fumes which congeal on the walls and ceiling. Steaming/boiling produces water vapour which condenses on the walls and ceiling. This may not only damage the veneer on the "wood" surfaces, but may also damage the drywall walls and ceiling. Kitchens, bathrooms and similar areas use (or should use) drywall and paint which is resistant to water and grease, and which can be cleaned. Regular domestic drywall and paint will not, and cleaning will damage them too. It's perfectly possible that your cooking could land you with a bill for renovating the entire room which involves taking it back to bare concrete/studs and entirely rebuilding. If you're lucky, that bill will "only" be in single-digit thousands, but it could easily be more.

If you don't have regular room inspections, and won't get found out within a few months... You can absolutely guarantee that every surface in your room will be damaged, and there is no way around it. So you'll definitely be faced with that bill. Most universities will not award a degree to anyone who still owes the university money, so if you can't pay up then you've lost your PhD at the end of all this.

Regardless of the (lack of) fire safety of that specific area, your room will have a smoke detector in it. Any time your cooking produces the slightest whiff of smoke, the entire building will be evacuated and the fire brigade automatically summoned. This will make you extremely unpopular and lead to disciplinary action from your university: cooking in your room is almost certainly forbidden. Have they not provided you with a kitchen area?

Using your kettle to boil water for tea and coffee will probably be fine.

19
Timing cooking: methods / workflow
7
Do chillis impregnate a wooden chopping board?
14
Utensil materials - plastic, metal or wooden?
27
What are the different applications for differently shaped wooden spoons?
1
What is this spoon-like kitchen utensil with a rubbery head and wooden handle called?
10
How do I reduce kitchen temperature during cooking?
0
Induction cooker on a wooden table?
3
Wooden butter knife sanding?