What's a pan and what's a pot?

In Dutch, we have just one word for pots and pans, which happens to be "pan", so I was surprised to learn about the word "pot". I learned that pans are for frying, which is why they are shallow and pots are for boiling, which is why they are tall and have straight sides. But that doesn't seem entirely correct. Saucepans seem to have the properties of a pot, but are a pan.

There is a lot of conflicting information on the internet. So what's a pan and what's a pot?

I think the answer to your question lies in the etymology of the words.

Pan is actually coming from Germaic pfanne (in Dutch panne). Which is from Latin patina (shallow pan, dish) and Greek patane (dish, plate).

On the other hand, pot also has Germanic roots it means vessel (also in Dutch) coming from pottus (drinking cup) for Latin.

So the difference as the etymology of the words put it, pans are shallow (akin to dish, plate) most suitable for shallow frying, and pot is a vessel for boiling, simmering or deep frying.

As a native English speaker, certainly where I come from, saucepan and cooking pot are mostly interchangeable. However, I understand the differentiation to be that "pans" have long, extended handles and "pots" do not. So a pan: 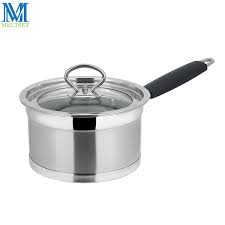 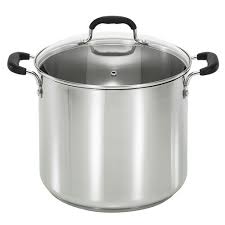 Pan: "A pan is a round metal container with a long handle, which is used for cooking things in, usually on top of a cooker or stove."

Pot: "A pot is a deep round container used for cooking stews, soups, and other food."

Not the answer you're looking for? Browse other questions tagged language pan pot or ask your own question.

3
Is a pizza like this unheard of in the USA?