what are these darker stains in radish?

We have some radish that have these darker areas in the flesh. Currently, we are on the island of Malta where food ingredients are very low quality in general, so anything out of the ordinary immediately becomes suspicious :) 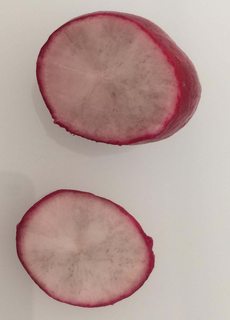 It's a fungal infection. If you google Aphanomyces raphani you will see much more serious examples but that how it looks usually when the outside is not affected (so also not thrown out by seller)

I'd be tempted to say,

However, when it comes to fresh fruit & veg of dubious provenance that is going to be eaten raw, that rapidly turns into,

The only mitigation - & I would still be wary of it - would be to take it back to the supplier & ask them. There's an outside chance they could say, "Ah, over here, they all look like that." ..though I'd still want more evidence.

Not the answer you're looking for? Browse other questions tagged food-safety radish or ask your own question.

6
What are these spots on my butternut squash?
0
Does it make any sense to grate the radish on a grater without peeling its skin?
0
What can make a radish lose its flavour in a dish?
5
Are these eggs rotten?
7
button mushrooms turned red while frying in butter
13
Are there advantages to an unlined copper jam pan?
2
What can I substitute for radish when making kimchi?
1
Are these knives safe?
5
Substitution for green meat radish