Which kind of mortar and pestle replaces a blender?

I can't stand the noise, and even just the idea, of a blender in my kitchen. I want to keep things more natural (less plastic) and waste free (less products).

So I was looking into getting a mortar and pestle instead. I stumbled onto a great looking olive wood one but after reading the answers to this question I'm not sure it's what I'm looking for. I did some more reserach about the different kinds but since I have no experience with any of them it just sounds like I would need a different one for every task. I can't imagine every chef as every kind.

In the best of worlds I want to crush spices and herbs, make sauces, grind seeds and nuts, pound garlic and ginder, and maybe even make some soups. Which kind of mortar and pestle would be most versatile in this case?

As usual, Serious Eats has an article for this, covering what type of M&P to buy. They recommend a large granite model for most purposes, but an olivewood or marble one for certain special foods, like pesto.

Your question is specifically "replacing a blender", though, and "even make some soups". An M&P will never replace a blender for pureeing liquids. First, you can't put much liquid in even the largest countertop M&P, no more than a liter. Second, M&Ps do not work for pureeing liquids, but rather for grinding dry ingredients. If you were to put a chunky soup in, and try to pound it, the soup would just splash all over the counter. And forget trying to make frozen drinks like daquiris in one.

All is not lost, though: you can pretty much handle almost all foods if you combine an M&P with a stick blender. Yes, it's still a blender, but it's smaller, quieter and more economical. The only thing you won't be able to do is the frozen drinks.

A mortar & pestle needs to be always clean, always handy & always the right size for the job.
A teeny mortar & pestle rapidly becomes a decoration rather than a useful tool if it's not big enough to cope with the high volume tasks. On the other hand if all you're grinding is 4 cloves, then you'd be lost in a large one... so you may end up with two.

There's always a lot of 'elbow grease' involved to use it & to clean it.
If you're happy with that, read on...

Personally, I went with a resin one. Looks like stone, feels almost like stone, actually man-made.
From comments - I had an untested theory that a real stone one could potentially be tainted by strongly flavoured ingredients, so I went with resin, as being completely impermeable.
Weighs a ton, or feels like it. I just weighed mine to see... my kitchen scales wouldn't take it, so it went on the ones in the bathroom - 7.5kg, that's over 16lbs. 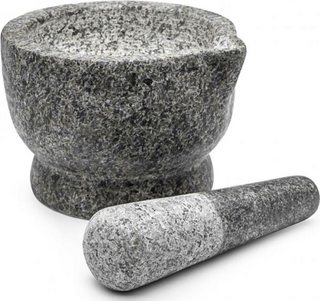 Heavy, so it doesn't run away from you when you're pounding like a champ.
I used to have a smaller & much lighter one & I found I was chasing it round the worktop more than I was actually usefully grinding. Also, it was wooden, so every time I cleaned it I couldn't use it again until it was properly dry or I'd be making sludge. I eventually binned the smaller one as I almost never used it, & because I have no qualms about using an electric grinder, chopper or blender as appropriate - & in fact I got an electric spice grinder the last time I had just 4 cloves to grind & could barely find them in the bottom of the mortar ;)

The trouble is that even at that weight, it will still really only hold about a litre [2 pints or so] whilst giving you room to manoeuvre.
For similar reasons I also bought an electric blender big enough to do large batches of soup.

Not the answer you're looking for? Browse other questions tagged equipment mortar-and-pestle or ask your own question.

13
is there a downside to using a wood mortar and pestle?