What does the ash content of broken wheat really mean?

I purchased some broken durum wheat (also called lapsi or daliya in India) to make upma and was shocked to find that it contained ash. 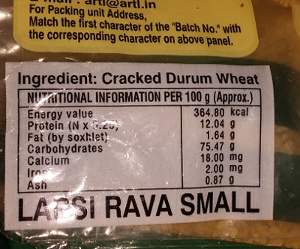 It seemed silly that someone would deliberately mix ash into broken wheat, and this site says it's not mixed in the flour, but is just a measure of the percentage of non-starch parts the wheat has. But as per this website:

The ash content of white pan bread flour has increased over the years from 0.45% in the 1950s to the current level of 0.50-0.55%. This has undoubtedly resulted from negotiations where the miller has agreed to the flour buyer’s price but only if he can raise the ash content of the flour a couple of points (0.02%).

How can anyone raise the ash content at will? This almost sounds like someone is adding 0.87g ash per 100g of wheat, but I reasoned it speaks of the amount of residue produced by the milling process. Am I right? I was just concerned about "ash", since when I tried washing the broken wheat, I had to wash it more than double the number of times I wash brown rice (that's at least 7 times for brown rice), for the water to finally become clear (I hope it isn't necessary to wash it so many times). Everytime I poured in water to wash it, the water turned a whitish grey, which made me think it was ash :-)

The "Ash" is not an ingredient in the flour

To be clear, the "Ash" is a measure of what you'd get left - if you burned the flour. It is not an ingredient in the bag of flour.

More specifically if you had 100g of flour - the "Ash" number is literally how much the Ash would weight if you burned all of it. As starch burns readily, what you'll be left with is mainly minerals.

Some people will determine various properties of the flour based on this Ash number. For one, a higher Ash number generally means more of the wheat's non-endosperm parts were included in the flour.

As milling is generally the process of separating the endosperm from the rest of the wheat; a less effective milling process will result in a higher Ash figure. So in a way, you can consider it to be a quality measure. But in other ways, it's just another indicator of "what exactly is in the bag".

Ash in the flour

Not the answer you're looking for? Browse other questions tagged nutrient-composition wheat milling or ask your own question.

4
What is the difference between cracked wheat and wheatgerm?
11
What does "contains 2% or less of" mean?
3
nutrition facts: what does "as packaged" mean?
10
Does dumping the water from boiling ramen noodles reduce the fat content much?
11
Why does commercial brown (whole wheat) bread taste bitter?
5
In ingredient lists, does "lime" mean the fruit or the chemical?