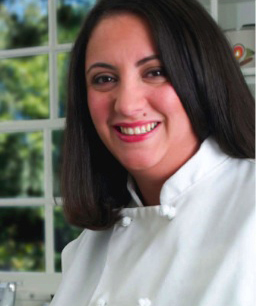 Chef JoAnna is a classically-trained chef who specializes in at-home fine dining. Like the renown Julia Child, JoAnna first attended culinary school in her early 30's, and started cooking professionally soon after. While attending culinary school in Santa Monica, CA, she earned a 4.0 GPA as well as certifications in Nutrition, Cost Control, Culinary Management and Safety & Sanitation. Chef JoAnna has appeared on several television programs. She was featured in a segment on "BBQ with Bobby Flay" on Food TV, and has also appeared as a guest chef on several reality TV shows, including Kathy Griffin's "My Life on the D-List", MTV's "Next" and on "Survival of the Richest". Originally from Chicago, Chef JoAnna moved from Los Angeles to Nashville in 2008 to have a huge garden, and possibly... eventually... a small farm-to-table restaurant.

We respect a laser-like focus on one topic.

6 Secrets to making crystal clear gelatin? May 9 '14
2 I want to substitute liquid oil with a dry product May 9 '14