Why is my gluten so weak?

I’ve been making sourdough bread regularly for over a year now. But since about half a year ago, the bread has consistently come out badly because the gluten doesn’t seem to develop properly: 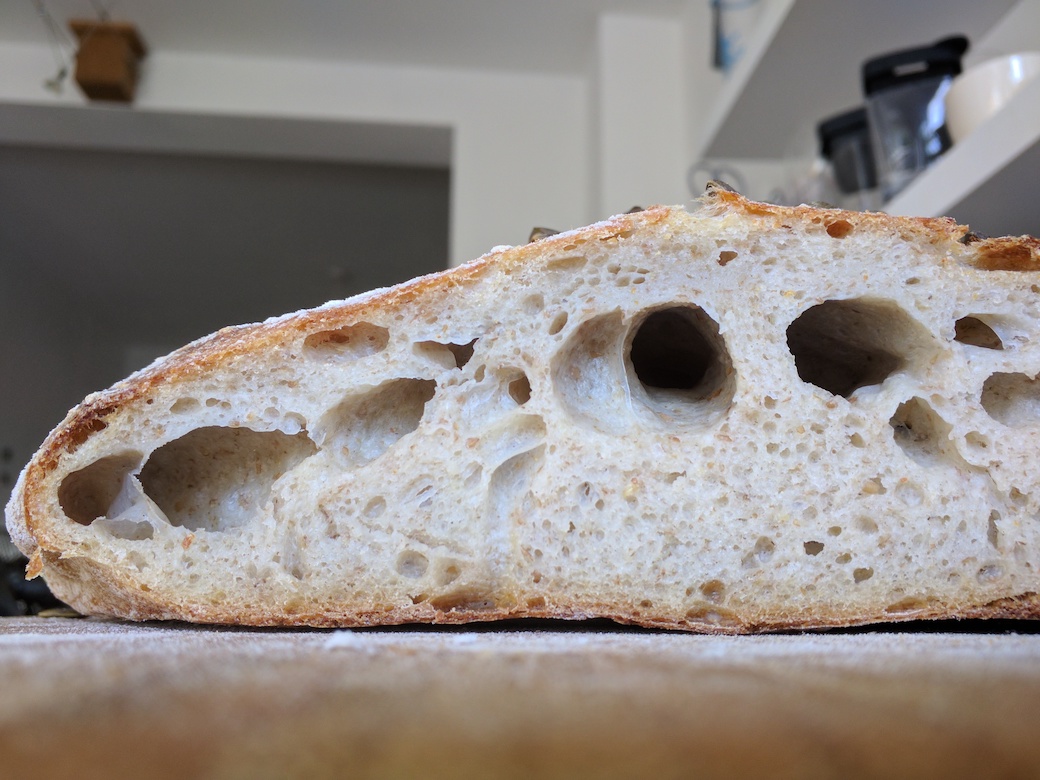 I’m following (more or less) the recipe for the Overnight Country Blonde from Ken Forkish’s Flour Water Salt Yeast, performing 4–5 folds. My modifications are as follows:

A word on fermentation and proofing: if I perform bulk fermentation or proofing at room temperature for the indicated time in the recipe, I get a hopelessly over-fermented … “jelly foam” rather than a dough. The result is completely unworkable, sticks to everything (even when dusted way too liberally with flour), and can’t be shaped: it either fails to develop a skin when pulling the dough together, or it develops a skin that breaks immediately, repeatedly, and the sticky dough almost “pours out” (I’ve thrown away several batches).

As far as I can tell my sourdough starter is extremely active and produces strong fermentation with lots of gas. By contrast, it seems that no matter how diligently I perform the folds, the gluten structure is too weak to make a fluffy dough which holds its shape. I also tend to get a dough that’s too elastic to perform proper folds: I used to get a dough consistency somewhat more like wet clay, which somehow simply felt “right” and had just the right elasticity to pull out and fold over. Nowadays the dough has lost all its clay-like consistency and, as indicated above, it feels more like a foamy jelly.

Here’s the problem: with the exact same procedure I used to be able to produce much better loaves, some of which were darn near perfect (though I didn’t always get there). Now, without having changed anything in my procedure, the result is consistently terrible. I have no such issue baking other, yeast-based breads.

What could be responsible the sudden change, and the weak gluten development?

1 I’ve also tried adhering strictly to the recipe in this step. It didn’t change the outcome.

You have two pieces of evidence that your starter has changed - the bread itself, and the "jelly foam" that happens during room-temperature proofing.

I suspect your starter has been contaminated with some other micro-organism.

You should toss your starter, clean your refrigerator carefully, and get a new culture.

Not the answer you're looking for? Browse other questions tagged bread sourdough or ask your own question.

5
12-hour fermentation makes dough wetter
2
Why is my sourdough too sweet?
3
My overnight sour dough went slack, could my 'starter' have eaten too much gluten?
3
Underside of dough in proofing basket pulls apart
11
Picking up wet dough
2
How to avoid collapsing bread?
9
Why is my baguette type bread coming out almost flat?
0
Sourdough starter used too early
7
Why would a fully-developed dough lose consistency (elasticity / extensibility)?