In the 50s, my mother used to whip Jello and Evaporated milk together, pour it into single serve bowls and refrigerate. The result was a creamy foam that separated into two layers, forming a lighter foam on top. She always said it was simple to make but never taught me how she made it. I've tried simply stirring the Jello into boiling water to dissolve, cooling to room temperature and before it sets up, adding the evaporated milk and beating but it doesn't work. I've been looking for a very long time but all the recipes I find are much more complicated than this simple, elegant foam. I'm thinking she may have halved the amount of water the Jello box calls for. Maybe she whipped the milk separately and then added the dissolved Jello? Has anyone heard of this? If so, how is it made and does it have a name?

Kraft has a recipe that resembles what you describe, in which you could substitute whipped evaporated:

To whip evaporated milk, an easy method is to pour the contents into a metal or glass mixing bowl, and place it (and, separately, the beaters) in the freezer for 30-45 minutes, until ice crystals begin to form. Remove and beat at high speed until thick, 3-4 minutes.

Alternatively, food author Liz Berg has devised a method that emulates the discontinued Jello 1-2-3 product that separated into layers:

Divide dry Jello into two medium sized bowls. Add one cup boiling water to first bowl and stir till all sugar is dissolved. Add one cup of cold water and mix till combined. Pour mixture into clear glasses (6-8 depending on size) filling to halfway point. Chill till slightly jelled, about 30 minutes.

When the bottom layer is slightly jelled, whip the cream and repeat the process with the second bowl of dry gelatin, decreasing the cold water to ¾ cup. Whisk in the whipped cream and pour the Jello mixture on top of the first layer. Chill till set, about 4 hours.

I learned to make this with chilled evaporated milk and icy cold mizing bowl and beaters. It's been a while but the hot water was half the recipe amount, stirring to disolve the jello. Let it cool while you beat the milk to stiff peaks only. The trick was to gently but thoughly mix the jello and whipped milk. That way the jello is not well incorporated into the fluffiness of the milk and tends to sink, creating a layer of jello. When you up end it, the jello is on top. Be careful not to use too hot of water to loosen it from the mold because the foamy top becomes the bottom that will tend to flatten out. If you over mix the two ingredients, you will have a fluffy concoction that is so sweet and smooth on a hot summer's day. Both are winners. I've never tried freezing it. I bet it's good!

Both Jolenealaska's link and Dorothy's second answer have the jello set with boiling water, chilled until semi-firm, and then added to the evaporated milk (or whipped cream). This should make a light, fluffy dessert with the right flavor profile. To make it come out in two layers, though, seems trickier - either ending up with a uniform dessert, like Jolenealaska's, or making two batches of of different consistency and deliberately layering them.

It may be one of these will be a good enough answer. I was just wondering if there might be a way to make the layers come out naturally, if the dessert will settle on its own somehow - and, so I am offering suggestions, with the caveat they may not work.

If the evaporated milk was mixed in to the jello while still hot, either in addition to or just instead of the cold water - it might settle into two layers while chilling. If so, it might be gently folded in pre-whipped - though I'm less sure about heat and the stability of whipped evaporated milk, this recipe here suggests it is possible...different ingredients and method, but still folding in mechanically leavened ingredient and intending to have it separate into two layers - thus, maybe.

Alternatively, you might heat the evaporated milk with the water, and add the jello to the mix. With both the water and milk being hot, it might dissolve the jello mix more easily and also let it settle into layers more easily - though it might also make it a lot harder to froth up and make into foam rather than smooth layers. Idea was kinda inspired by a description of a failed recipe (here, where a similar method caused it to settle into layers - but since the original intended texture was different, it might not work quite the same way. 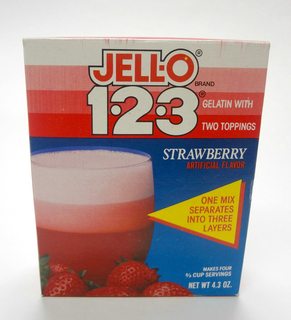 Evaporated milk, jello. Make jello with only half the water required. Add evaporated milk 3:1 milk water ratio Beat with mixer. Place in refrigerator to set. Every so often (about every 20 minutes the first hour) beat with mixer until just before firmly set.

My mother called this fluff. I think it resembles some flummeries.

I make this all the time. Great for when your sick or your kids have been sick.

1 can of condensed milk (unsweetened) cold. Put in freezer till it's very cold.

Pull out can of milk and whip it up like whip cream, and semi jelled jello and whip it with the whipped can milk until it is fluffy, put back in the refrigerator to set up a little more and eat. That's it! Enjoy

Not the answer you're looking for? Browse other questions tagged dessert gelatin foam evaporated-milk or ask your own question.