Does one have to occasionally put up with this kind of nasty surprise after switching to organic beans?

First I diversified my source of protein by eating beans. Then I was glad to find that it's a lot easier to find organic beans than organic beef. Even better, I could stock on a variety of beans and reduce my visit to the health food store to once every six months.

Now the bad news. Before cooking beans, I submerge them in water overnight. I'm now finding that one kind of beans is infected with insects. These living insects float to the surface. This happened despite that I stored the beans in an airtight container. Given the airtight storage, I'm guessing that I purchased the beans already contaminated, possibly with eggs. 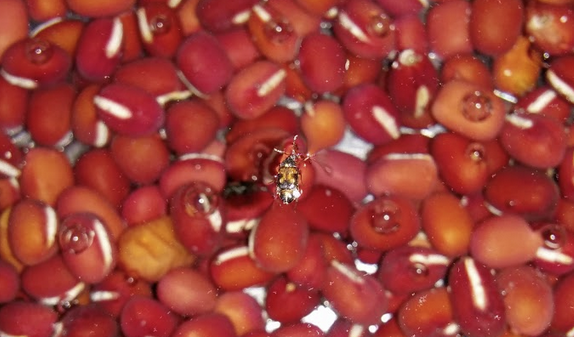 Is this one of the distasteful surprises that one must put up with once in a while if one chooses organic beans? I'm guessing that the very reason we humans are interested in organic food—the absence of pesticides—is also the reason why insects will get attracted to them. Although they may be present just as much in other non-organic food, except that they would have perished.

In the old days it was apparently not uncommon to buy apples from the store and once in a while find a worm. These days even organic apples never show these undesirable proteins, possibly as a result of food irradiation.

Especially if you are vegetarian, I'd like to hear from you whether it's possible to look around for better stores, or whether this is part of the deal.

Organic or not, there is always a chance that an item, especially a dried and stored item can become infested and any point in the cycle. Dried beans, it seems most likely to be from a storage issue at some point, but it really could be at any time. I would take them back to the stores, give them an opportunity to correct the situation, then decide from their response if they are a supplier and if the brand is one that I would continue to use.

Now, for the bad news. I a assuming you are in the US, but the same or similar statements are likely true elsewhere: I farmed for a time, and was often asked why I did not get organic certification. The reasons were simple, I did not agree with the rules associated with organic certification, the extra fees and inspections for the right to label my items in a way that, in my opinion, misleads the consumer. "Organic" is a legal USDA labeling and rule set in the US, which the general public reads as natural, pesticide, herbicide and fungicide free, safe and sustainable agriculture. That is what was intended, but once regulations and marketing gets involved, it means something very different. Unless you grow the item yourself, or use a local, known source and learn their practices, you can almost be certain that pesticides were used, herbicides and fungicides may have been.

There are lists of "organic" controls that are allowed, and are used, but fall within the rules of organics. The main but not exclusive rule is that they are from a natural source, ground rocks, plants, roots, etc. Many degrade much faster than the lab created chemicals most farming uses, some are less harmful to non-target insects, but others are actually just as nasty and damaging as those foul smelling petroleum based chemicals wiping out bees, earth worms, other beneficial, and are not very good for humans. Since agribussiness learned that there was money to be made behind that organic label they got rules passed that allow them to sell inferior product for premium prices.

Sorry, I do not mean to be a downer, but, for most items I would highly recommend finding your local farmers market, and when you go to it, talk to the farmers. Find some you trust and support the local guys who are doing it right. End of my opinionated reply though.

Not the answer you're looking for? Browse other questions tagged organic or ask your own question.