The dough in my bread maker collapses just after cooking starts

Every time I try to bake some bread in my bread maker, it rises at first but just when cooking process starts and the device increases the heat, the dough collapses!

My device is Even Baker XBM 1029S. There is not much info about this model but it seems to be a clone of "Cookworks Signature Breadmaker". The same menu, LCD, Buttons. 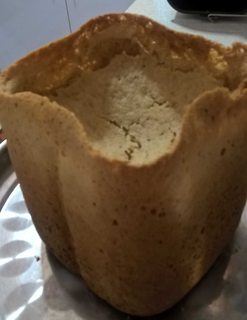 I would first check on the type of flour I am using. To produce breads, always use flour that contains the highest protein count. It is this protein that produces gluten, and the more of this protein the stronger the gluten. This can be called a multitude of things, from 'Strong Flour', to 'Baker's Flour', to 'Best For Bread'.

Another thing you might want to do is check your mixing times. If your dough is undermixed, the gluten will not be strong enough to properly expand and hold structure from the CO2 produced by the yeast. Likewise, if the dough is overmixed you can see the same problem.

just a couple of things to start.

EDIT: you don't mention what type of flour you are using at all... If you aren't at least using a 50% mix of wheat flour, you aren't going to get proper rise as wheat flour is the only type that contains 'gluten'. Even when you buy 'whole wheat bread', this is usually a mixture of flours.

In addition to what @mrwienerdog has suggested...

Bread machine recipes are a distinct branch of bread recipes. Most bread recipes that you find on the internet and in cookery books assume that you are making by hand (or at least using a mixer to knead the dough). Bread machines mix and knead the dough much less thoroughly than is needed compared to "hand" kneading. This is a result of the need to use as small a paddle as possible (so you don't destroy the loaf when removing), but results in a loose texture to the dough if no additional gluten is added, or a low gluten flour is used. The dough will then rise fast, and create a very weak texture which will collapse when baked.

Other possible causes are:

I bake both by hand and (now) use a bread machine, and ended up with a few loaves that looked like yours, and had other problems for the first few loaves when switching to the machine. I found that the best way to learn exactly what were the problems with the machine, was to open the machine and have a look and feel of the dough during the kneading process. This, along with a bit of experimentation in terms of liquid, gluten and other ingredients means that we now get nice consistent loaves. The key I found was to make sure that the proportions of ingredients are very close to the recipes.

This is a hard problem to diagnose. There are many things that can cause this, and trying to figure out which it is (or even if it's the same each time) can cause you to tear out your hair in frustration.

Even so, they all basically boil down to the bread rising too fast and then collapsing. (Sure. And all my money problems are caused by expenditures exceeding income. But how do I solve that? If I just stop paying my employees, I've really cut expenditures, but I won't have any income at all!)

One possible problem is too much liquid. The water turns to steam, puffing up the bread in the oven (or the bread machine), but then there isn't enough support structure underneath and it collapses. Similarly, if there's too much yeast, or it grows too fast because of too much sugar, or too little salt (part of what the salt does is inhibit yeast growth), or if you were on timer and you didn't keep the yeast out of the liquid, or the temperature was too perfect, or who knows what, the little creatures just grow too fast and give off too much carbon dioxide, which puffs up the bread, but there isn't enough support structure underneath to support it, and it collapses.

It's somewhat interesting that the collapse happens early in the process in a bread machine (sunken top) and a little later in hand kneading and oven baking (mushroom top with huge air bubble). Or maybe that's just my experience.

One possibility is that your flour has absorbed moisture from the air. I now start all my bread recipes with 1/4 cup less liquid than the recipe calls for and find that I am equally likely to add flour or water to get to the right dough consistency. And after years of using a bread machine, I will say that it is far easier to judge the consistency of dough by feel (kneading) than by sight and sound (bread machine).

Edit: I forgot to mention: bread flour (high gluten content) really does make a difference. If a recipe calls for bread flour, use that. If it calls for all purpose flour, it may or may not really need it. (Sausage buns, dinner rolls, hamburger buns are all better [softer] with all purpose flour. All the recipes in Charel Scheele's book, Old World Breads [not a bread machine cookbook, but the recipes are easy to adapt], call for all purpose flour, but I haven't found any that seem to need it and only a few [holiday breads] that seem to prefer it.) I haven't yet found a recipe that required additional gluten if you're already using bread flour, although I've found quite a few that called for it. Maybe I've just been lucky and it's the difference of environment, or maybe the people who wrote those recipes are just health nuts. (Yes, I realize a nut is someone who forcefully expresses an opinion I don't wholeheartedly agree with.)

It's very difficult to diagnose the issue you're facing without more info, but here's my best educated guess... I doubt the bread is being under baked, or not kneaded enough, because you're using a machine that is designed to do it properly, so I'd bet that you're not using strong flour.

Strong flour is suitable for this style of bread making because it contains enough gluten to provide a structure for the bread that doesn't allow air to escape. If you don't have enough gluten in your dough, or don't work the gluten enough, air will escape from your dough and your bread will fall.

Make sure you do not have too much liquid. About 9 fluid Oz's for 1.5 lb loaf.

Yeast should be between 1 to 2 teaspoons for 1.5 lb loaf.

The quality of gluten in your Strong Bread Flour may be poor. Add 1 teaspoon of VITAL WHEAT GLUTEN and 1 tablespoon of LEMON JUICE.

This collapse happened, in my bread maker, only when I used wet cake yeast. Seems to me that type of yeast must have more of the properties of instant yeast, and not well suited to the rising/kneading process of the bread machine. If I use regular yeast, or if I use bread machine yeast, this collapse doesn’t happen.

Make sure there is a stable temperature in the room where your bread machine is working, no opening and closing doors.

16
Why does my bread collapse in my bread machine?
1
Making bread dough in the bread maker and baking it in the oven
13
I want to duplicate my bread mistake!
1
Yeast and Flour for Panasonic Bread Maker
13
Can I refrigerate bread dough after the first rise and bake it later?
4
Can I freeze bread dough after the first rising?
5
Issue getting Atta bread right
11
What's the point of long/complex sourdough feeding techniques?
9
Why is my baguette type bread coming out almost flat?