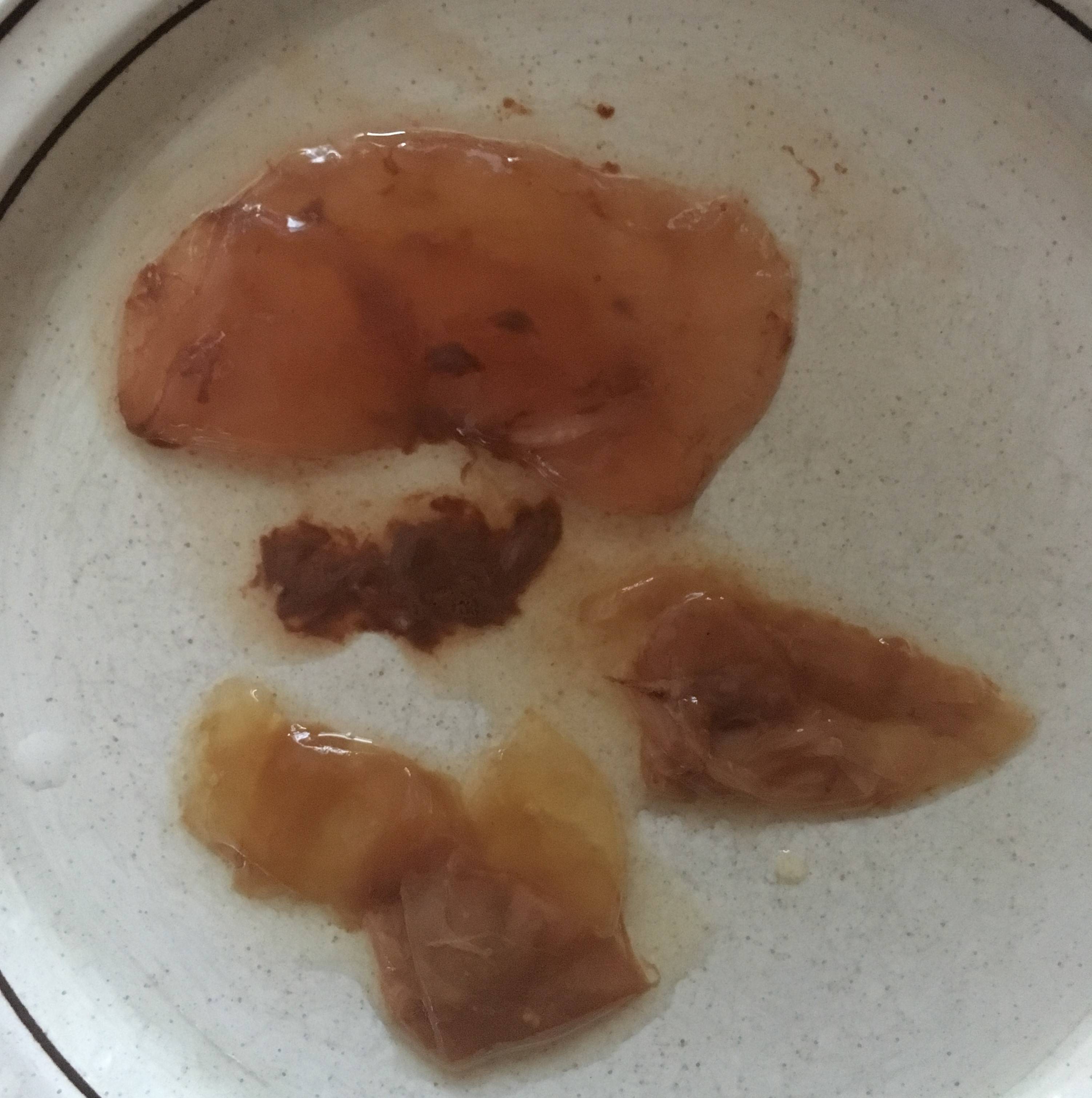 This is my first attempt at making kombucha. For the 2nd fermentation I had one bottle and one jar. When it tasted ok I put the bottle in the fridge and am drinking it now and it's pretty good (although maybe a touch vinegar-y). The jar I left in a cupboard at room temp because there was this film on the top after several days, I didn't know what it was, it was creeping me out a bit, so I avoided the whole thing. Now, about 10 days later, I just need to deal with it.

In the photo, the top scoby (and the one at 4 o'clock position) is what was in the jar at room temp with a long 2nd fermentation and never put in fridge until just now. They are both totally soft, flabby and fragile, not at all firm like the pictures of scobies that I see. That brownish stuff in the middle that reminds me of chicken livers was on it and I sort of pushed it off. The kombucha in that jar is, I'm afraid, too strong although once cold in a few hours I'll see how it really tastes.

The bottom scoby is the one I grew and used for the first fermentation. It has been sitting at room temp in a jar soaking in some of the 1st ferment.

I'm relatively new to even drinking kombucha let alone making it. I liked what I bought so I thought why not make it. But I have to admit I'm a bit squeamish about these scobies that just aren't what I expected, plus the food safety aspect is making me hesitant.

So here are my questions: - Do those thin, fragile scobies look healthy and why do they look and feel the way they do? - If I want to make another batch, do I use all three? - Neither jars developed any carbonation. Any ideas why? - Any other advice or comments are welcome!! - Are there any recommended threads on making kombucha that might help me?

All of your scobies look safe and healthy. They will start out thin and slimy. If you want to grow a more substantial scoby, leave your ferment for longer than usual until it is strong enough to not crumple completely and can continue to grow in future batches.

For your food safety concerns, you want to avoid anything green, blue, or fuzzy. One method of reassurance of safety would be to keep track of the acidity of your kombucha.

The preferable pH for Kombucha is 3.5-2.5. You can get hold of some pH strips to test this. Any pH below 4/3.5 is considered safe, amd will prevent any harmful micro organisms from growing, due to the acidity. When you first mix a new batch it will likely be above this mark, but should drop below 4 within a couple of days.

Not the answer you're looking for? Browse other questions tagged kombucha or ask your own question.

8
How do I control the quality of a kombucha SCOBY?
3
Raw sugar vs. refined sugar in making kombucha
3
Does store-bought Kombucha spoil? If so, how can I tell?
3
Does Tea Quality Matter For Making Kombucha?
4
How to prevent a baby scoby from forming in bottled kombucha
2
What is the problem with using a flavored kombucha as a starter?
2
How can I restart my kombucha liquid?
4
What is the risk of food poisoning when making nattō
1
Does tea play a significant role in kombucha fermentation?