How do I best cut florentines from a finished (baked) baking tray?

I have baked a tray of florentine pastry, and I have spread chocolate on it (dark and milk). It's about 35 x 35 cm. Now I'd like to make cookies out of it.

I know recipes say to cut the pastry when it's still warm, but it was just far too thin and fluid to do so: it would basically have amounted to pushing a knife into almond flakes which are floating in a sauce; it didn't seem realistic at all.

The pastry is nice and crisp and thin now (as thin as I could get it, maybe 3–5 mm), as it should be. The consistency is a bit like semi-hard caramel. but of course with almond flakes over the entire surface (so much less hard, easier to break/cut). How can I best cut (square-shaped) cookies out of it?

I don't think breaking is an option, so it has to be cutting or sawing? I see no option but to use a large kitchen knife. Should I press it down until it snaps? Or should I move it along the length of the desired cut ('sawing')? Should I use a smooth knife or a serrated knife (probably not)? Or is there anything else you can recommend?

I'm afraid I might break the pastry into irregular shards and bits if I do it wrong, but I haven't tried yet without asking you!

P.S. It doesn't stick to the baking-paper much, so that won't be an issue.

P.P.S. You see the orange in the picture which I grated for the zest. 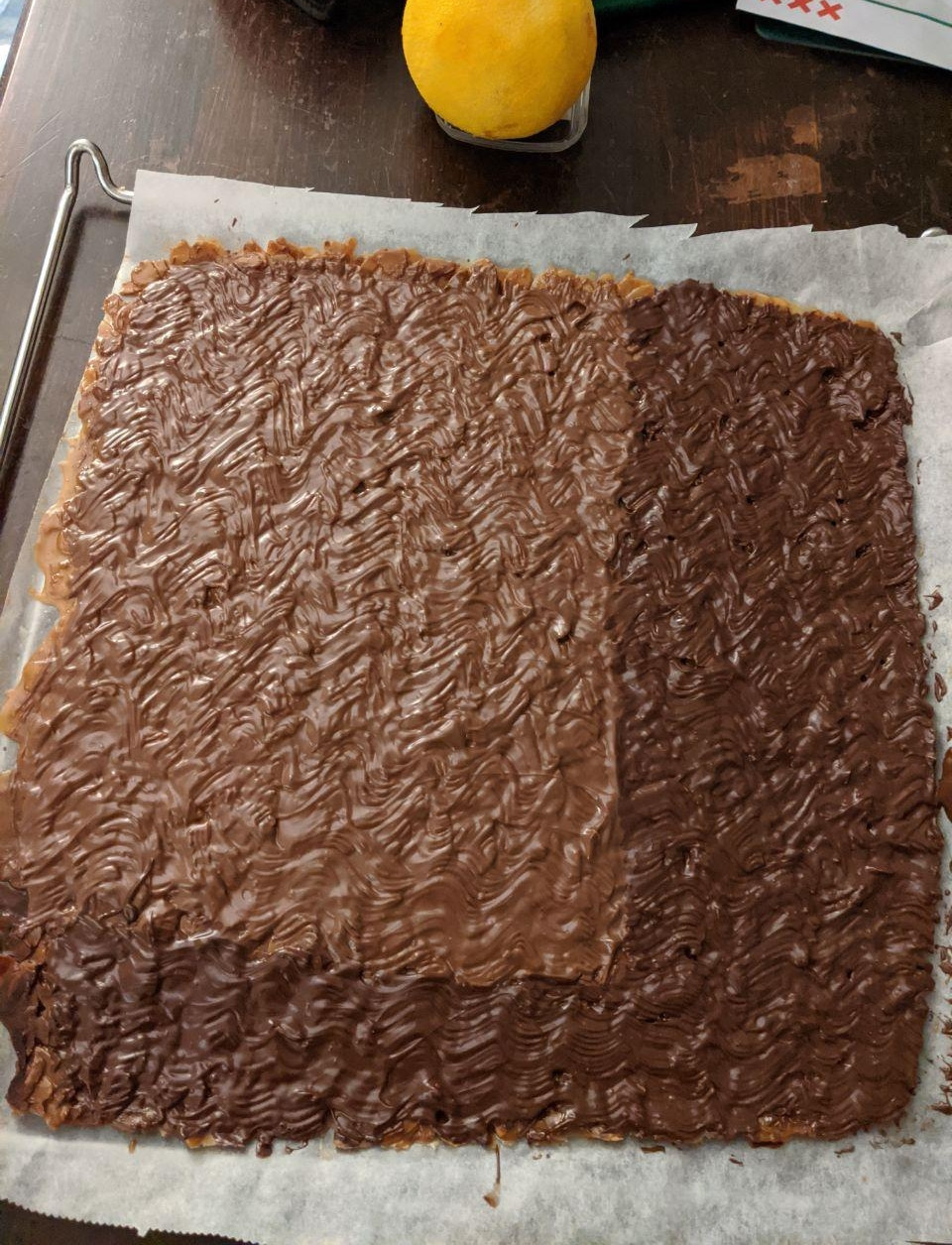 Epilogue: I ended up cutting them with a non-serrated knife, which I put in a pan of very hot water between 'cuttings', to partly melt the cut (wipe with paper towels in between). I cut by moving the knife up and down the length of the cut ('sawing'), but I did also exert some downward pressure. It worked well enough, except for some breaking at the edges which were not flat at the bottom (because of the uneven baking tray). 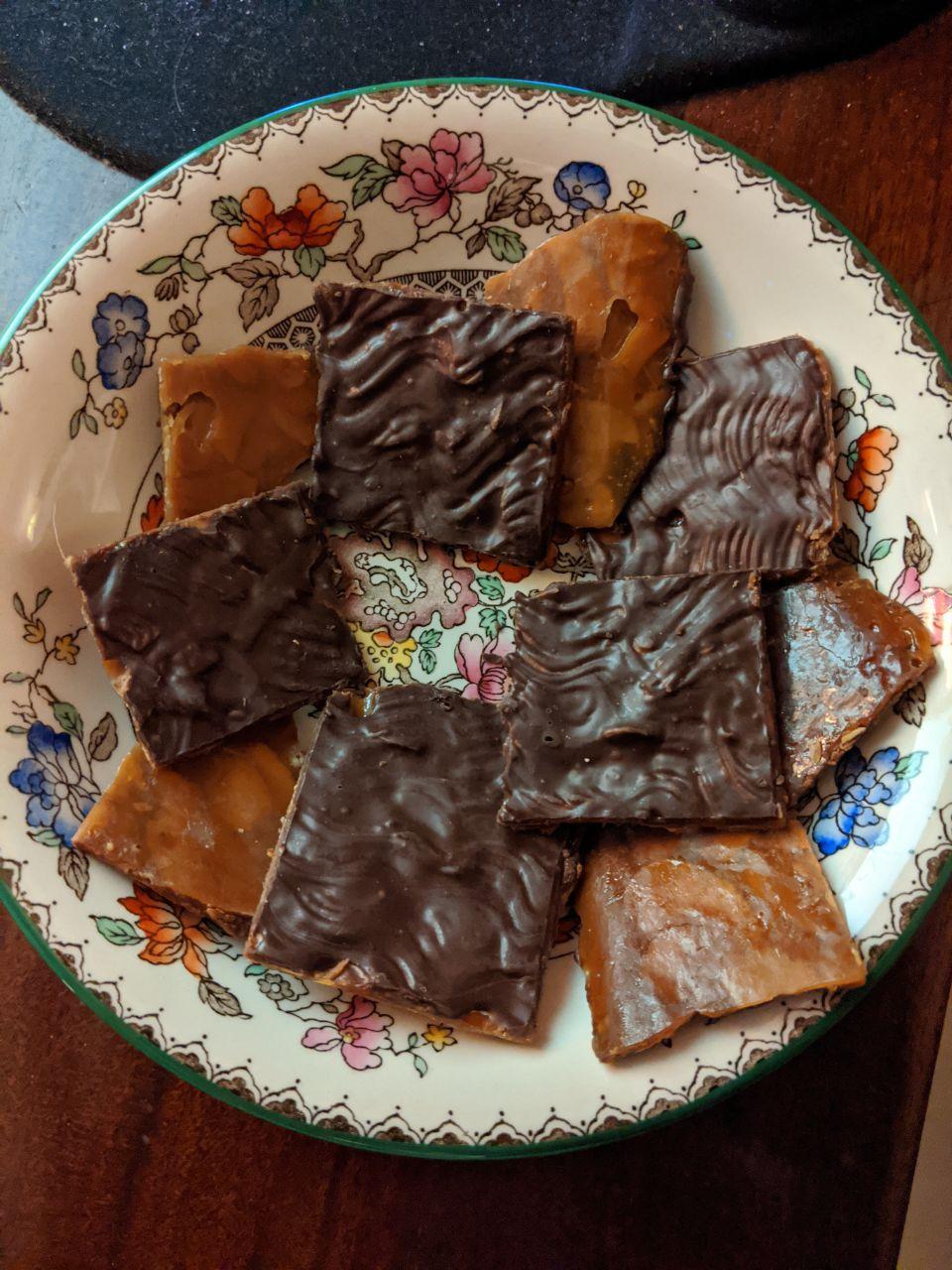 I find that it's easiest to cut fragile, hard things with a serrated knife. I would go with a bread knife and slowly saw though it. In the future, I would recommend waiting until they're slightly set but still warm and cut then instead of waiting until it's completely cooled.

I'm not sure how brittle your recipe is, but if it has a little bit of plasticity, I would try scissors. They will likely produce better cuts. If it is not scissor friendly, a sharp pizza wheel might also do better than a knife.

If you do use a knife, sawing should be better than pressing, less chance of it spluttering under the knife.

Not the answer you're looking for? Browse other questions tagged baking pastry cutting or ask your own question.

13
How do I cut out the vein/tendon from a chicken breast tendorloin?
5
Gyuto knife - What it can & can't cut? What cutting techniques?
1
Problem in cake baking tray
1
How should I improve my chopping flow?
1
Flourless cookies form "skin" that seals in moisture
1
How to cut a cake that was baked in a pie pan?
4
Lace cookies TOO thin?
3
What type of baking tray is WINGY?
0
Proper chopping technique
18
Is it bad to be a 'board tapper', i.e. to tap your knife rhythmically when you're cutting vegetables?