200g of molten butter, with 1.5 cups of sugar; nearly half an hour of mixing on medium-low heat barely persuaded sugar sand to half-dissolve, with a couple of tablespoons of water poured in. Once 1 cup of milk powder pre-mixed with half a cup of cocoa powder was folded in, the sugar sand reappeared, as can be seen in the photograph. And a liquid separated - probably water with some cocoa powder dissolved in it.

Any ideas on how to get the sugar dissolved? 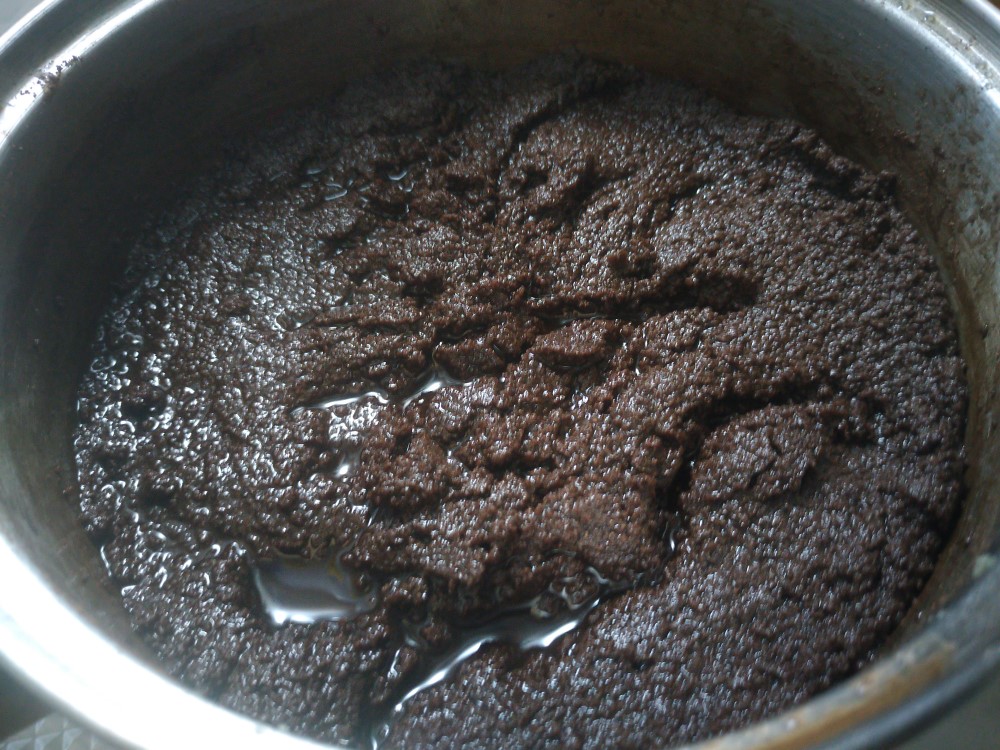 My only idea currently is to throw cooled down mixture into sharp-blades blender - maybe, the sugar will be turned into icing sugar. But the quantities are too high, will take a while in this tiny blender. Oh, and throw some coconut oil into the mix.

There is another question like Sugar won't dissolve in cacao butter which suggests using finely powdered sugar, but I would prefer to start with normal sugar and figure out how to dissolve it.

I don't think this recipe is possible to turn into truffles. The ingredients you name will not turn into a smooth, stable mixture on their own. Truffles depend on chocolate: without actual chocolate in the recipe, you will not end up with a truffle. And turning fat, sugar, and cocoa into chocolate is not possible by just stirring, you would need a chocolate conching machine to make a stable emulsion.

If you hadn't mixed the ingredients yet, my suggestion would be to melt the sugar before adding the remaining ingredients, making a sort of chocolate caramel. However, if you try to do that now, the cocoa (and possibly milk powder) will likely burn and turn everything bitter.

My suggestion to attempt to salvage the mixture at this point would be to add three eggs, a cup of flour, and bake as a brownie.

You can try a blender and likely improve the texture somewhat, but you'll get something more like Nutella - a chocolate spread or sauce. And unfortunately you'll likely still have some grains. Honestly it would be acceptable for a truffle filling in my opinion.

That said you can't make a chocolate which will set using water. and you can't dissolve the sugar in mostly fat either. Real chocolate is made using a special wet grinder which just grinds the sugar and cocoa solids super fine. The imperceptible particles are suspended in the cocoa butter. The cheaper the chocolate, the more likely you'll find the occasional grain.

That said, my personal recommendation would be to add enough water (a cup or more) to dissolve the whole thing, cook the mixture up to around 230/235, take it off the heat and turn it into chocolate fudge, which should also work for a truffle filling.... Unfortunately not actual chocolate, but still. You'll have something to show for all that stirring!

Edit to fix typos, add a little info and also suggest you watch some candy-making videos before trying it!

Not the answer you're looking for? Browse other questions tagged sugar butter or ask your own question.

9
converting pure chocolate to "bittersweet" chocolate
4
Does the type of sugar make a difference when making chocolate?
6
Why would a recipe call for pouring boiling butter into egg-whites?
10
Properly melting butter and sugar together for butterscotch bar recipe
8
How can I make these cookies less sweet without ruining the texture?
11
Dissolving sugar in a beverage
3
Dissolving xylitol in a raw, home-made chocolate
6
I always burn my fudge. Why?
2
Why sugar butter cocopowder mixture got hard in double boiler
8
Can you create brown butter directly from heavy cream?