What is this type of cookware called? 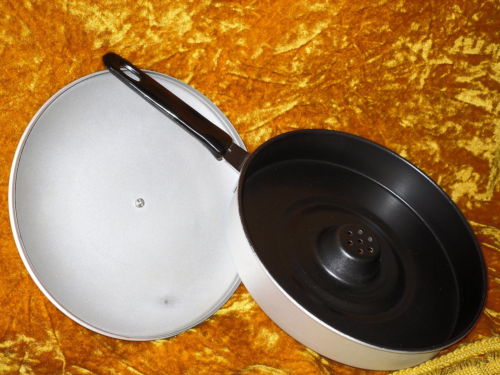 I asked a question about a "Wonder Pot" a bit ago, and this item came up on a search. I don't think it's a wonder pot though. The center hole is effectively much smaller, and there are not any vents in the lid. There isn't a "flame tamer" either, although this part may be lost.

I keep seeing cookware like this in thrift stores, and I'm pretty sure it's for one specific task. What might that task be?

This one had me scratching my head for a while. I came across the phrases "stovetop oven", "raised center skillet", "steamer pan" and a bunch of other dead-ends. 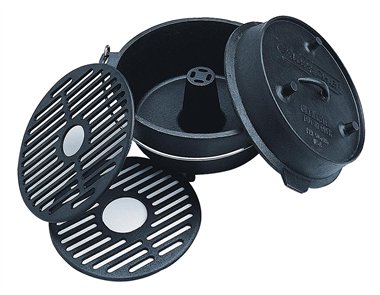 Looks familiar, doesn't it? This one is cast iron, but what you've found is clearly a non-stick version of the same thing.

It's sold as camping gear. The raised center in the middle is what they call a "convection cone". Presumably it's meant to emulate a convection oven (inefficiently, I might add, since there's no fan) - the vents in the cone are a means of distributing the heat, to help mitigate the usual skillet problem of the bottom being overcooked while the top is still raw. I'm pretty sure that nothing is actually supposed to go "inside" the cone, other than hot air. It's probably fairly effective if you're cooking over an open flame (i.e. extremely hot air).

A 3" high non-stick version of this would seem to be of pretty limited use. I can imagine trying to make "baked" potatoes in there, or maybe pre-butchered chicken parts? As you can see from the link above, the "full-size" version can hold a couple of small birds, and again, it's cast iron, so it's infinitely more useful for outdoor cooking.

It is a dry pan, from Tefal, you most likely find in Europe.

Edit by rumtscho The answer used to contain a deep link on a site called top-shop.ro, now the domain still exists, but the product page is gone.

We had one of these when I was growing up. I remember the commercials identifying it as the perfect pan for frying chicken.

The concept was the vents let out undesirable moisture so that all of your pan fried pieces of chicken would be crisp throughout. It was also supposed to be a healthier way of cooking since it was supposed to use little to no oil.

I seem to recall it was a pain to use and results were eh... okay. It got a lot of use though because of the cost.

Funny thing is, my mom and I saw one of these at goodwill today and my 17 year old daughter asked the very same question and my mother was able to confirm my memory was correct.

See these two links: What is this pan all about? and Kitchen Sleuth: What Is This Pan?

The holes are for steam. What is under the raised center?

It's called Dry Cooker in Europe. You can find it in Romania, buy it from TV shopping. Not sure who makes it, but I can tell I used it and it really works. Unfortunately there are fake copies which are not Teflon, so you need to be careful what you're buying. Not sure whether they can be purchased online and have them delivered in other European countries, but I have tried getting one here in The States and was not able to find it.

I have one like this, but much older. It is useful to bake things on a stovetop when you don't have an oven. I have used mine for roasting potatoes and making sponge cake and it works quite well. Mine, though, has a heavy iron rin that you are supposed to put underneath it, I guess to spread the heat.

I was curious about its purpose so I have done a bit of research.

As previous posters have said it’s a dry cooking pan.

They are widely used in eastern Europe and seem to be quite a good alternative to using an oven especially if you are only cooking for one or two.

They are available today on Ebay for as little as £8:25 plus postage and packing.

I’m back to the charity shop tomorrow to snap it up.

But I might just keep it as a conversation piece LOL!

I have one of these. It's a Swiss Dry Fryer and it means you can cook mushrooms etc with just one teaspoon of oil. You put the oil in, put the lid on and wait til it heats, add whatever onions, pappers, mushrooms... and replace the lid and just shake occasionally and they cook perfectly in so little oil! It's a great gadget. Mine is over 15 yrs old!

It's called a convection frying pan. I've had one for about 30 years. They were most recently made by Starshine & you can still get a pre-owned one on Ebay. You rub just a tiny bit of butter in them, like you would with a cake pan, & cook on low heat - like a on an electric stove. They come with a lid. The holes in the center allow the heat to come in through the bottom. They are great for chicken, vegetables, any kind of meat. You can cut pork chops with a fork & there's hardly any fat & no grease.

When I was growing up on Long Island, NY we had a stove top oven looking very much like the one that you showed in the first picture. It was from the middle 30's. I was told that it was for baking potatoes on the top of our gas stove. If I remember correctly it didn't work very well What we had was aluminum

Not the answer you're looking for? Browse other questions tagged cookware or ask your own question.

9
where can I purchase a “wonder pot”?
0
How can I make crispy potato wedges without frying and oven?
2
How to imitate the oven on the stovetop?

2
Questions about cookware set
4
What precautions should be taken while dropping cold vegetables in a hot Teflon cookware?
1
Disposable cookware
5
Stainless steel cookware scratches
5
Is titanium cookware safe?
0
Can the non-stick coating be removed from cookware and still be useable?
3
Induction cookware not working with some induction cookers
3
Balti versus European cookware