Why are non-orange coloured carrots so uncommon?

Carrots come in a great variety of colours, from almost white to dark purple. However, the most ubiquitous colour variety is orange, and often the only to be found in regular supermarkets. Why is this? 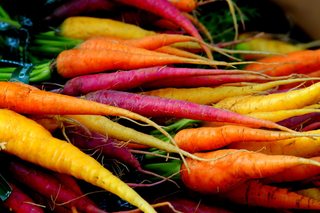 According to the History of Carrots page from the World Carrot Museum:

The current yellow/orange varieties (containing carotene) through gradual selection in Europe, now form the basis of the commercial cultivars around the world, mainly through their superior taste, versatility, nutritional value and cultural acceptance.

It is clear that until as recently as 1500 or so, carrots were cultivated in a variety of colors such as purple, yellow, and white, but orange was not among them. Dutch carrot growers, who were among the most prolific, created the orange hybrid:

The orange colour did not become popular until the 1500's when Dutch growers developed the mutant vegetable by selective breeding to make it less bitter than the yellow varieties, and then it was said to be adopted it as the Royal vegetable in honour of the House of Orange, the Dutch Royal Family, although there is no documentary evidence for this latter "fact". The first carrots were grown for medicinal purposes, perhaps the medicine tasted good! The main reason why cooks and housewives preferred orange carrots was because they kept their colour after cooking and did not leave cookware with an unpleasant colour. — Carrot Museum's Carrot Color page

There are actually many orange cultivars (in addition to the many other colors), which come in a variety of shapes from long and skinny (the Japanese carrot) to shorter and stubbier (more like a radish).

I was under the impression that most carrots were originally more purple and that it was essentially bred out to be replaced with todays more common orange carrot. After having sourced some purple carrots recently I would guess that the reason they remain uncommon today is that, as with many other purple foods (beetroot for example), they have a tendency to dye everything else on the plate purple, and as such are not ideal for presenting nice looking food, and are therefore less popular.

Not the answer you're looking for? Browse other questions tagged vegetables history carrots or ask your own question.

19
What is the best way to store carrots?
6
Cooking "purple sweet potatoes" or "purple yams"
3
Did I blanch baby-cut carrots correctly?
3
Why do purple snap beans turn green when cooked?
4
blackened carrot cake
6
What is the white film on my wet carrots?
45
Are carrots dyed orange?
40
Why are certain fruit & veg bought in UK supermarkets tasteless?
7
Why orange carrots turn black while peeled?