I recently purchased a counter-top, one element 1800W induction cooker, mostly just to see how well the technology worked compared to my gas range.

I took it out of the box and immediately threw about a half inch of water in a cast-iron skillet as a test and set the coil to max power. I noticed that the water began boiling almost immediately (impressive) but in very tight hot spots (two very clear concentric rings, presumably the shape of the coils or some magical physics property of the magnetic fields), taking a long time to spread to other areas (as expected with cast iron).

In fact, the hot spots heated up so quickly that the water was almost completely boiled before the handle had even a hint of warmth, and areas as close as a half inch or so to the hot spots remained cool to the touch for some time after the hot spots were hot enough to boil water.

My question is: Due to the rapid heating and large temperature differentials seen here, in practice does this lead to an increased incidence of cracking cast-iron with induction cookers? If so, what precautions should be taken (e.g. preheat cast-iron at a lower power first, only use cookware designed specifically for induction, etc.)?

Cracking? No, not in my experience. I own like 20 cast iron skillets (I've been told I have a problem).

Warping? Yes. I have a 2,800 watt per burner commercial induction stove with a very small pattern like yours. If you repeatedly overheat a pan on high for searing, it will eventually bow outwards. Warping can be mitigated by preheating your pan gently.

That said, if the pan is full of water or oil (for deep frying, not stir fry) there is nothing to fear. I have had the same stainless stock pot for 8 years and I roast it on high all the time (with liquid). Water is a very effective coolant (it's what keeps your car engine from overheating). The likelihood that a pan full of water will overheat is very unlikely, nigh impossible.

RE: comments. Yes it is a lot of skillets. This is what 14 looks like. 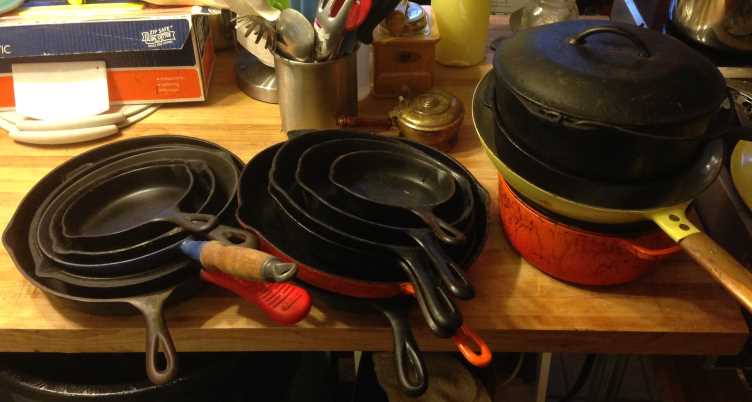 Having nothing to do with induction stoves, you should always preheat your cast iron or any pan for that matter.

Adding a bit more to my answer, although you have to take more care not to break the top of your stove, cast iron and induction stoves are a marriage made in cooking heaven. They are very well suited for one another.

Nothing beats an actual flame to monitor, but once you know your equipment, this is an excellent pairing.

To answer the question of precautions:

It's difficult to measure just how significant of a problem this might be, as it's possible that the non-ring area is only a few degress below the hotest area ... or it might be significantly off. As the water initially heats, the disolved gases will come out of the water and if the heat differential is causing convection, you might see quite a bit of it with none of it happening elsewhere. You might need an IR thermometer and heat a dry pan to see how severe the temperature gradient is.

Not the answer you're looking for? Browse other questions tagged cast-iron induction or ask your own question.