I have a recipe for a South Indian "allspice" mixture that includes cardamom among other spices. One begins with whole spices, toasted, and in the end they are ground in a coffee or spice grinder.

Does one have to extract the black seeds within the pod and discard the husks before roasting and grinding? Or does one roast within the seedpod and grind the whole thing, husk and all?

The entire seed pod is edible. With a coffee grinder, you may not be able to reduce the husks to powder (that’s more of a job for a burr grinder), which may affect the mouth feel of the final dish slightly but should be fine. The cardamom taste comes from the seeds, so you can remove the husks if you want, but I wouldn’t bother.

If you do decide to remove the husks, the easiest approach is to squeeze each pod along its longest axis (so, trying to make it shorter). This will tear the sides of the pod and expose the seeds. For fresh cardamom they may be in the form of a slightly sticky cluster. Either push the seeds out with your fingers, or scrape them out with the tip of a knife.

If the goal is to follow a South Indian recipe, then dehusking the cardamom and grinding just the seeds would be more authentic than grinding the pod whole. I spent much of my life in India. I studied among South Indians and ate at their homes regularly, and continue to cook Indian food by default even though I haven’t been there in a very long time.

When Indian recipes call for ground cardamom, it is invariably the seeds. The husk is never eaten. Even in rice dishes where a pod or two may be cracked open and added entire, the cardamom is expected to be discarded by the diner in whose portion the pod gets served; it would be considered unusual to eat the whole pod. And I have never seen green-tinged cardamom powder in any Indian grocery store or kitchen; cardamom powder is grey-black, indicating it has been dehusked before grinding.

The husk is also flavorless and has a stringy mouthfeel; it’s like eating straw. Grinding would mitigate that, of course, but why would you want to eat the husk at all? Besides, grinding up the tasteless husk along with the seeds would alter the strength of the cardamom powder, and your measurements would be off as a result. You will not replicate the flavor profile of the mixture correctly if you include the husks.

Edit. This answer gave me pause, since the poster says the tradition is that pods are used whole in South Asia. My experience does not match hers. But to check, I looked up recipes for garam masala (a common spice mixture, though prepared differently in different households) and looked through the first page of Google results. At least one of the recipes does in fact use the whole pod, though most specify using the seeds:

The Ministry of Curry recipe seems like an outlier, but provides additional evidence that the entire pod can be used. I have not met anybody who does this IRL.

As 'ground cardamon' is in fact light green*, it clearly contains husk, so one would imagine the husk is edible, if not directly digestible.

That when you encounter them [for some reason always in the very last mouthful] of a biryani, you just politely place them on the side of your plate is probably more of a 'chewability' issue than toxicity.

*As this seems to be queried as 'inauthentic' in some way, let me add that I buy this from a British Indian supplier, not from a supermarket's generic spice shelf. I can only conclude that this supplier would be aware of precisely what is in it & its 'authenticity'.

Cardamom is a major spice in south Asian countries such as India, Iran and Pakistan. I always have ground cardamom handy in my kitchen and grinding as a whole is the tradition in the aforementioned countries. The husk might not be as flavorful as the seeds, but I believe the aroma comes partly from the husk, it doesn't hurt to grind the whole pod. The point is, you wouldn't end up with a very finely ground cardamom because it will lose aroma if not used in a day or two. Sometimes you can add the husk to your teapot for a nice mellow flavor.

The point is, please do not throw the husk away, it makes me sad thinking about someone doing that. It is edible, aromatic, flavorful and fun to chew.

You can add a tsp of coarse sugar / granulated sugar to have a finer ground cardamom, the same applies for grinding saffron. This is what you get grinding the whole pod + sugar (in my experience, the small amount of sugar doesn't affect the taste noticeably): 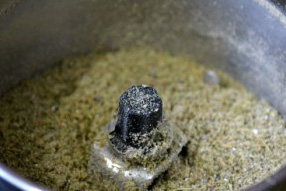 When making ground spice mixtures as you describe, whole cardamom pods are used and ground up. This is usually clear from the recipe (see for example recipes for garam masala).

Cardamom is sometimes used whole, particularly in rice dishes, and then most people do not eat the pods (because their flavour is too strong and they are very fibrous).

(Exactly the same applies to Indian bay leaves, cloves, cinnamon stick, etc: they can be eaten if ground up in a spice mixture that is to be distributed throughout a dish, but otherwise they are discarded as eating them whole is uncomfortable.)

Cardamom powder is added to sweet dishes. I don't keep cardamom powder as it loses its flavour quickly, so I make it as needed with a pestle and mortar. For this I use only the seeds, and use the husks to add a little fragrance to tea. But I am not sure whether commercially available cardamom powders typically use the husks. Given the high cost of cardamom, I would guess that they do.

I cooked my first chicken korma today. The recipe called for "crushed cardamon seeds." I whacked the cardamon seeds with various implements and tools, but the husk was quite tough. I essentially fractured the hull flat, but most of the component pieces hung together (in other words, it didn't disintegrate like a clove of garlic when you smack it). At that point I decided to just fry them in the oil (to infuse the oil with cardamon flavor), cook them in the curry, and pick out before eating. Turns out that the husks softened considerably during the cooking. I did pick one up with my fork, thinking it was a small piece of chicken. It certainly wasn't something that I would have eaten, but I could chew on it. It wasn't a tooth-breaking thing - just something you wouldn't necessarily want to chew and swallow.

5
Is there any diminishing return on grinding spices for a "tea"?
10
Does toasting and grinding whole spice really improve curry flavor?
4
Can I / should I keep spices & dried herbs in the fridge?
3
Exactly which kind of cardamom should I use in pho (phở)?
6
How to predict and adjust the spice level of dal?
16
How to deal with strong, sizable spices?
3
Base gravy for British Indian food - is it useful at home?
17
Do certain spices really go bad? or will people without refined palates usually not tell the difference, specifically chili powder?
4
Grinding toasted spices without cooling