For opening non-screw-cap wine bottles I tend to use a "waiter's friend" style corkscrew (i.e. one with a lever that you push against the top of the bottle in order to extract the cork). I recently tried using this on a bottle that has a more rounded than usual top, with the result that every time I tried it, the lever slipped off the side of the bottle. Eventually I opened the cork by clamping the bottle and pulling on the body of the corkscrew, but for future reference is there either a technique for using such a corkscrew on this kind of bottle, or an alternative design of corkscrew that does not suffer from this problem? Do the variants of the waiter's friend that have a hinge in the middle of the lever help prevent this, for example?

Just as a prelude, I've heard these referred to by a huge number of terms: "waiter's friend", wine opener, combination corkscrew... on and on. I'm going to call it a wine key below simply because that's how I first heard it described.

I have always found hinged versions to be much easier to use, and they do help with rounded tops as you describe here. It's actually fairly easy to illustrate why.

Here's opening a bottle with a "single-piece" wine key: 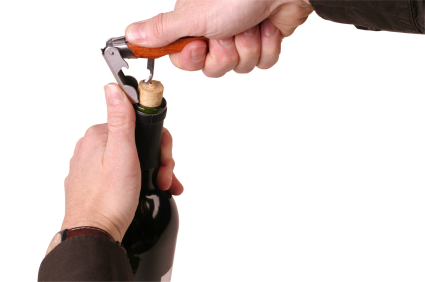 Notice how the lever contacts the lip of the bottle at an angle? For most bottles, that's not a huge problem, but if that lip is significantly rounded, the lever won't be able to "catch" properly and will slip off when you try to extract the cork. Sometimes you can manually hold it into place (as this guy appears to be doing) but that's tricky at best.

This is a less significant issue with hinged wine keys, because the hinge allows you to press the first lever into an angle much closer to 90 degrees: 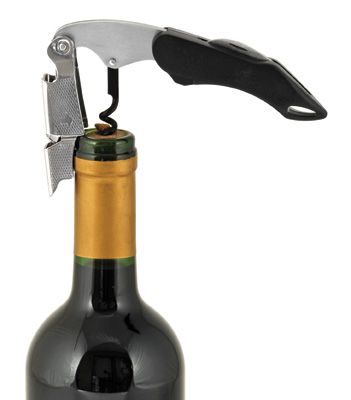 That helps the lever stay mounted while you pull up on the handle to partially extract the cork, and once you've made it this far there's typically much less resistance.

The hinged version is also just easier to use - because the levers are shorter, the actual corkscrew can be placed closer to them. The entire wine key is really just a second-class lever, and what this does is move the load closer to the fulcrum, which increases the effectiveness of the handle's motion.

For what it's worth, nearly all the professional waiters and sommeliers I've known have carried and used double-hinged wine keys (most bartenders too, but at places which serve primarily beer and where there's little use for a corkscrew, many will opt for a simple flat bar instead). There were only a couple of exceptions, and in nearly all of them the corkscrew was a gift and used more for sentimental value than ultimate practicality.

In fact, the overwhelming number of those people carried this exact model, which is simple, cheap, and very durable. I myself have at least two of them (probably three) floating around the house; at least one of those is over 15 years old, and shows little signs of wear even after being used for years during my stints as a waiter and behind the bar. I can't think of a single other service tool that I'd recommend so highly.

Not the answer you're looking for? Browse other questions tagged equipment wine or ask your own question.

8
Wondering if the bottle of wine I have is still good or not
15
Are there any scientific advantages to using a cork to stop a wine bottle?
16
How to get a synthetic cork back in a wine bottle?
8
How long does Marsala wine last, after opening?
3
Wine sediment clinging to top of bottle?
2
Using white wine in the cooking
9
Does the speed of opening of a bottle of wine influence its flavour?
1
Do I need to let red wine breathe each time I uncork the same bottle?
4
What's wrong with my iSi soda siphon, and how do I fix it?
1
Optimal type of wine bottle opener?