How can I make my Chocolate Mousse fluffier?

I regularly make Chocolate Mousse with an egg yolk, sugar and dark chocolate base folded into whipped egg white or whipped cream (or both). It's tastes pretty good and has a nice mouth-feel. Now I want it to look good. What I have looks something like this: 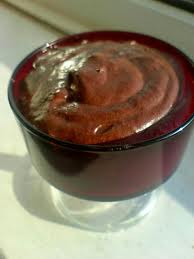 Instead I want it to hold a form and have a delicate velvety texture like in the image below. 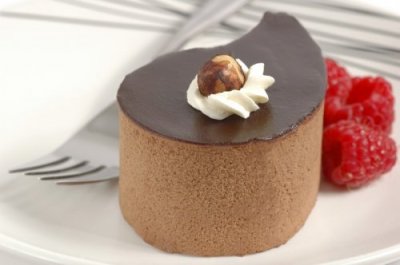 The recipe associated with this picture uses a lot of butter. I've seen other recipes include gelatin.

What are my best bets?

The dessert pictured above definitely, definitely has gelatin in it. That will change the mouth feel on the mousse slightly, but it might be what you are going for and will provide some of the stability that you are looking for. To have it hold a form like this you will need a recipe that requires gelatin; I would recommend gelatin sheets if you can find them at a local baking/cooking supply store or order them online.

The fluffiness will also be determined by several things. How were the whites whipped (too much, too little) or how was the cream whipped (again too much, too little)? There are recipes that call for both. How you incorporate all of the ingredients into one another really matters and in what order, this is called tempering. You want to fold until the mixtures are just combined; no more.

Temperature is of key importance for all of the ingredients - some you want very cold while others (ie chocolate) you want to be room temperature but not too cool or it will seize up the mixture and the mousse will taste grainy.

Also chocolate mousse texture can definitely be affected by the percentage and quality of chocolate you are using. If is is of a higher percentage it can create a denser mousse and deflate the whites and cream more easily.

I made a chocolate mousse recently using soft-peaked whipped cream folded into a melted chocolate/butter/sugar mixture at room temperature. I found the following helped keep the mousse light:

1) Before whipping the cream (I used a hand mixer), I put the metal bowl and mixer blades in the freezer for an hour. 2) I folded in the whipped cream 1/3 at a time. The first third tends to lose a lot of air as the chocolate mixture is pretty heavy. But this provides a lighter, stabler mixture to work with when you incorporate the 2nd and 3rd thirds of the whipped cream. I found that the end result was less dense than if I had folded the whipped cream in one fell swoop.

i have only made mousse a few times, but it didnt start setting correctly until i was using a) whipping cream (ie whipped from scratch, not from a tub) and b) using a stand mixer. otherwise it tasted good but didnt have a consistent fluffiness. if youre doing this by hand, or using a pre-whipped cream i doubt you will be successful based on my experience.

A mousse from The New Best Recipe helped produce the dense velvety mousse I was looking for. I used two large eggs, 3 ounces of bitter chocolate, 1 ounce of unsalted butter, 3/4 cup of cream and 1 tblsp sugar.

The key difference from my usual recipe is the use of butter, although some other changes may have helped stiffen the mousse. Usually I heat up a yolk, sugar and milk mixture to 80C before mixing in the chocolate. In this recipe I melted the chocolate first and beat in the uncooked yolks one at a time. Instead the sugar was beaten into the stiff egg whites which where warmed slightly before beating. The cream, on the other hand, was chilled and beaten in a metal bowl set in iced water.

Following the recipe I beat a portion of the egg white into the chocolate/yolk mixture before folding in the rest. I took Robert's advice and folded in the cream in a portion at a time. I did this with both the egg whites and the cream.

Presentationally my mousse was not close to the picture posted in my question, but from the shape the mousse kept while I scooped out spoonfuls, I can say that the texture was comparable. On a whim I used three times as much cream as the recipe required. A richer mousse would certainly have been better so I hope that the specified 1/4 cup of cream can be used without radically altering the texture.

I think you're right to want to use a little gelatin. In this way, you can maintain your recipe and it's taste, etc... but add the extra firmness.

To make it fluffier, remember to keep your mixing bowl as cold as you can.

Yes, you're right: The second picture definitely has got gelatin on it. To be truly honest, I don't see the point of adding butter, gelatin or even cream to your mousse, as it definitely doesn't need it.

Yes, you definitely need a stand-mixer. Even when the white has become very stiff, keep mixing them until it gets very hard (you must be able to cut it with a knife).

I think butter and pectin will help you.

I am proffesional Chef but at home I often use "handy" recipes and if they are more healthy it is a plus. For chocolate mousse I have one such, I don't remember from where I adopted it, but it is easy and less fatty - although you need a Food processor! Put 2 cups of chocolate chips into the food processor, boil 1 large cup coffee and while hot pour in the working Food processor, add 2 tbsp of canola oil (guess, you can skip and this?), stop the processor, cool and add whipped cream (low fat the best, at least you save something!), the more whipped cream, the fluffier, but the fattier!!!!

I have found that using a packet of instant chocolate pudding and mixing it with heavy whipping cream instead of milk...and instead of making the pudding and folding in whipped topping. You need a little more whipping cream than the milk that the directions call for or it is really thick. Its a very simple and very quick substitute!

Not the answer you're looking for? Browse other questions tagged dessert chocolate or ask your own question.