What is the difference between making French baguettes and US style baguettes?

I have noticed that there is a large difference between French baguettes with chewy crust and consistent airy and chewy inside.

Baguettes in the US are a different type. I am referring to the ones I find in serious bakeries (not mass production ones). They're often fluffy inside like a sandwich loaf, and the crust is either crispy or totally soft.

What are the differences in the production process which determine that a baguette will be of the French type as opposed to the US type? How are French baguettes made?

If you buy a French baguette in the morning, you can use it as weapon or vehicle jack in the evening. It is no surprise that a Frenchman, Jean-Baptiste Boussingault, tried 1852 to prevent this by hermetically sealing the bread, as he thought the problem is merely the loss of moisture - and who then learned, that his lovely baguette would still go stale hermetically sealed and so discovered starch retrogradation at the same time.

Anyway, bread that is stale the very same day is not what the average customer wants. They want their bread to last for a week - the tradition of buying fresh bread every single day these days can be mostly seen in France and Italy, not even in Germany any longer. And in France it is easy to maintain this tradition, as the next boulangerie is just around the corner. And they usually bake in two shifts, a morning and an evening shift.

It is rather easy for a real baker to choose how the baguette has to be (if he makes the dough), all the processes are well-known since more than 50 years, but there is always a trade-off and that is the problem. The biggest trade-off is the shelf/kitchen life. You get the best shelf life without traditional yeast, without much leavening and with emulsifiers that delay the staleness. This will produce bread with a soft, cake-like interior, an uncrusty crust and uncharacteristic flavor.

Here you can see the difference in comparison: 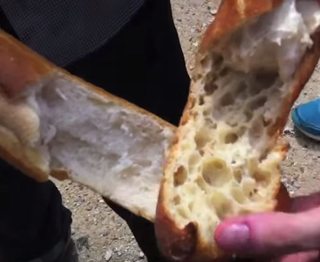 (The lack of natural yeast and traditional rising leads to this huge difference of the inner texture, the color difference is due to the flour. Note that bleached flour is an US invention. I don't think you can get bleached flour anywhere in France or Germany.)

This is how a lot of industrial doughs are still optimized. The more shelf life you are willing to sacrifice, the closer you get to the French baguette. This is the core problem. Of course, it is possible that one bakery uses a more appropriate flour than the other bakery, but there is no magic involved that only a handful of French bakers know - if the US baker would want to mimic the French baguette perfectly, it would take him less than a week to adjust the recipe to the local circumstances. But then again, how many US bakers ever flew to France to get a baguette for comparison? And how many US bakers actually make their own dough instead of buying the French baguette dough?

It is not possible to determine afterwards why the bread is different as customer. You can make a non-industrial baguette with a terrible crust but great shelf life f.e. by incorporating buttermilk or egg yolks, but it could also have be an artificial industrial emulsifier or an industrial dough in the first place.

Let's come to the ingredients and techniques:

French baguette is flour, water, yeast and salt. That's it. The very moment you add anything else, so it lasts longer or can be better kneaded by machines, you lose.

The most important technique is time - from ingredient to baguette takes at least 3 hours and the best result is obtained by kneading it as human, because what is desirable for bread, a consistent interior by kneading over and over, is not desirable for baguette. So the big difference between the US and France is: 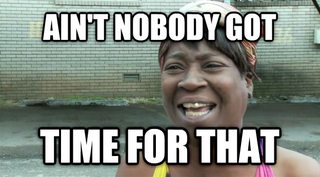 Regarding the steam: The steam prevents the building of the crust as it prevents the drying out. With steam you get a larger and lighter loaf, with a thinner, but nicely glossy crust. Here you can see the glossy crust of a baguette with steam: 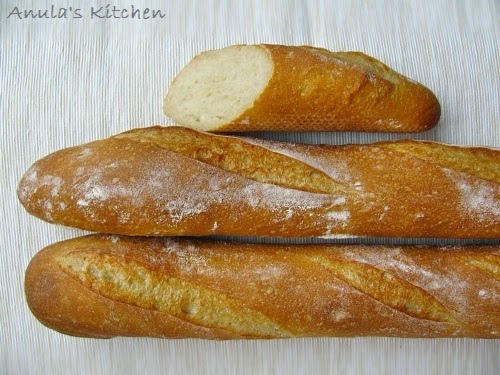 This is not a particular trait of French baguettes.

I'm no expert but my understanding is that to get a good crust on the baguette is to have plenty of steam in the oven. I believe that industrial baguette ovens have steam injectors, but at home you can place a tray in the bottom of the oven and put boiling water in the tray to create the steam (as they do in this recipe).

I suspect that the bakeries in the US just don't use ovens with steam injectors, which is why they don't have crusty baguettes.

The flour may take some part in it. In the US most flours found in stores seem to be bleached, which may alter the bread quality. It's not easy to know for sure which quality/flavour has been used in the final product.

These are two different main types of Baguette sold in France (if not globally):-

There is alot of information available on how these are made, especially on youtube. The video should show you the difference between the two and tally with your OP.