Parcooking Root Vegetables for Roasting the Day Before

Every Thanksgiving a family favorite is roasted root vegetables. Specifically: 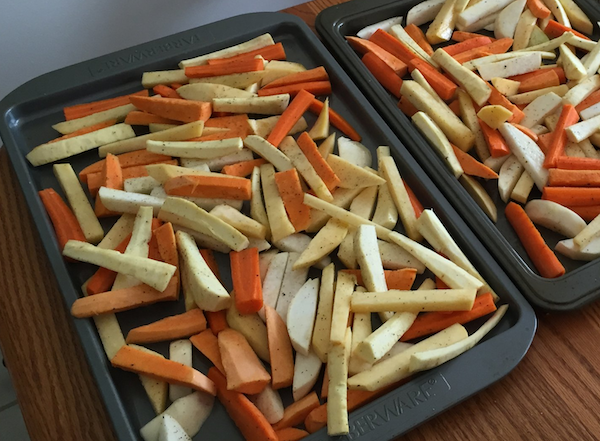 The problem is that they take 60-90 minutes and take up substantial space in the oven.

My proposed solution this year is to parcook the vegetables the day before so they are done much faster but still develop the delicious caramelization that makes them so popular.

My question is what is best method (boiling, roasting, etc) and level of doneness to take them?

If I were to do this, I'd be inclined to take cues from double cooked fries --

As for your specific question -- I'm not sure of the "best" way. Boiling (or simmering) is a pretty traditional way of doing this. It can end up washing away a bit of the starches, but it also tends to make the surface just a little sticky from geletanized starch, which can be a good thing -- as you can then toss them around to rough them up, giving just a little more surface area for crisping in that final roasting.

But it's also easier to overcook them to where they're falling apart if you cook them in water. You can reduce this problem slightly by boiling slabs, and then cutting them into sticks after they've cooled down, but you'll also reduce that extra crispiness that you get from the starchy coating.

You can also par-bake in slabs, so it's easier to turn things over as they're cooking, and then cut them up. Par-baking has the advantage that it's easier to judge how it fits on the trays you're going to use, so you know how much you need to prepare.

I'd also consider par-cooking each type of vegetable individually, as it's possible that one might be cooked through before the other ones. And if you do the beets last, it'll be less mess to deal with. (I might even bag them separately, so they don't color everything else)

As for the doneness to take them -- cooked through (so no one gets an undercooked bite), but before it starts changing color significantly

I'd roast them up a day before, put them in the freezer and reheat on thanksgiving.

Not the answer you're looking for? Browse other questions tagged vegetables roasting parcooking or ask your own question.